Located along the southern shore, the Eladrin city was hailed as being the ideal for what a civilization could be. After the event that caused most of the Eledrin to disappear, the city was all but abandoned until the Warforged, recently evicted from Uman' Yiro discovered it and moved in.

Show spoiler
Arc 1
Odysia was used as a home base for them until they were all asked to help in the Battle of Winterhaven in the year 1263. At the end of the battle, all of the Warforged were killed and the city stood empty once more.   Following the Battle at White Wolf Valley where the ancient dragon Straad had been summoned, the beast retreated to Odysia to heal his wounds and keep an eye on Overwatch from a distance. Little did he know that he had been followed and was soon attacked and killed in the great plaza of the city but not before the fight caused buildings to topple and massive devastation throughout.   Odysia was quiet for a time until a large black dragon called Ru'Thamor seemingly took the city for its new home.   Arc 2
A group of adventurers, including Malchus and Aralove Grimnas are sent to head off a group called the Order of the Scale and their plan to resurrect Straad!

After searching for years, Daegon discovered the whereabouts of an artifact called The Turion, which was said to be able to restore an area to sometimes in the past. Daegon formed a group of Eladrin to help find the device and eventually used it to restore Odysia to the day before the Eladrin were locked away. The Yurion also recreated the Eladrin who were in the city at the time.

Time will tell how the city and it's people will move forward. 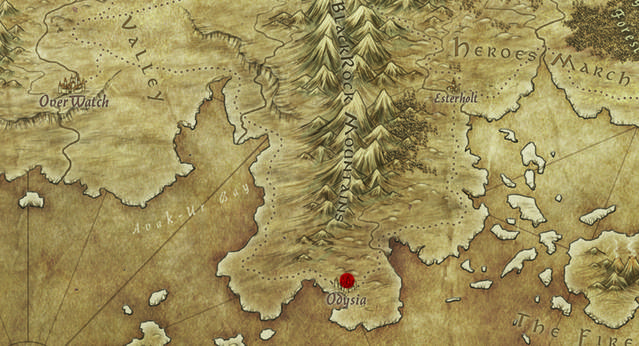