The Morning Realm    Geography      Villiers
Life in the mountainous Villiers is harsh and cold. Villiers borders Courdonne and Courdonne's vassal state Laria to the east. The nation is well sheltered, nestled in the far north-west of the Realm. The climate is not particularly suitable for farming, so the nation is dependent on fishing and trade to feed its population. They were an early naval power.   The country is also known for sheep, their tenacious griffon riders, and the strange song in the mountains that keeps luring their own away. The strange northmen are known to sport tails more commonly than other humanoids, even in families with no known Halfling descent.

Villiers wraps around the mountain Moria. The majority of the population live in Alfheim; the milder southern coast. Many rivers run through Alfheim feeding what little farmland exists in Villiers. The wooded evergreen forests that surrounds Dovra is known as Huldrheim.   In the far north-west Frostaheim a series of isles and icebergs strech out from the continent. Frostaheim also has a small portion of the mainland which is mostly cold desert.

Villersian government is divided into five major faction: the religious scholars Nidarings, the militaristic royalists Dovring, the seafaring Skaelings, the pastoral traditionalist Alfa, and the mercantile Birkers. The factions all rule together in collaboration with the Monarch under the paper peace. The factions keep eachother in check, preventing one faction from becoming too powerful.   The government officials of Villiers are selected through national oral exams that can be taken by any citizen of Villiers. Ideally the exam is supposed to be a great equalizer, but in practice only those who can afford the time off to study and private tutors tend to pass. The exam requires exhaustive knowledge of Villersian Law in all three courts, the ability to recite and compose kvads and other poetry, and a sparring section.   Villiers is a monarcy, currently ruled by Ravna Redhand. Ravna Redhand is sometimes known as the Usurper Queen. She overthrew her nephew, former king Eirik Magnuson, killing three members of his hird and his advisor Edelmere Tallon before forcing him to abdicate. Eirik Magnusson is currently imprisoned. 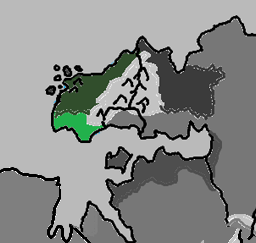 I'm no longer working on the Morning Realm, but I'm leaving it up for anyone who is still interested in my past work. If you want to see what I'm currently working on, check out Solaris!
The Morning Realm is written and illustrated by Annie Stein.   The Morning Realm is unofficial Fan Content permitted under the Fan Content Policy. Not approved/endorsed by Wizards. Portions of the materials used are property of Wizards of the Coast. ©Wizards of the Coast LLC.
Article template
Organization
World
The Morning Realm
Category
Geography
Author
nnie
Publication Date
28 Dec, 2021
Creation Date
20 Dec, 2021
Last Update Date
21 Jan, 2022
Visibility
Public
Views
289
Favorites
11
Comments
1
Work In Progress
Tags
Worldember 2021 ✨ Recent

I love how simply you weave in storyteller seeds in this article. "the strange song in the mountains that keeps luring their own away" and I'm immediately sucked in and curious. Great work

Thank you so much! I cannot wait to write more about it. It's very much inspired by norwegian folklore, one of my favourite things to reference.