"Mother, what is that ring you wear all the time? The one with the flower symbol I see all over the house. "
"Ah, my son, this is the Crimson Haldi that gives our house its name. Far in the past, the founders of our house were the ones who discovered the various uses of the Haldi.  It is due to this flower that our nation prospered. It is with this flower that we have kept our position as the rightful rulers."
— Queen of Kuthary to her son.

The Signet Ring of House Haldi is a gold ring etched with the five petaled Crimson Haldi flower. This ring is passed down from generation to generation for the leader of the house to wear. The Crimson Haldi is a flowering plant found in the swamps of Kuthary. House Haldi was so named because they were the first ones to discover the various properties of the Haldi, one of which is a highly potent poison. This posion and many others are what led to Kuthary establishing itself as a properious nation that deals in such things.
The ring is more than a simple signet, having been enchanted with the ability to detect poisons as well as slightly resist them. These properties are well known as a way to deter would-be assassins from trying anything so pedestrain.

It also houses a compartment with a hidden needle for delivering either a poison or an antidote, whichever the ring has been primed with. When the ring is entrusted to the next head of the house, the secret for activing the ring is also passed down.
Describe a historically significant piece of jewelry in your world. What stories does it carry? 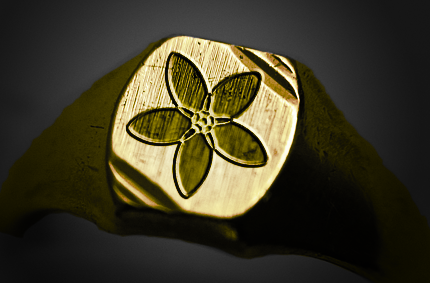 Signent Ring by edited by Lethann
Item type
Jewelry / Valuable
Current Location
Kuthary Swampland
Related ethnicities
House Haldi
In response to the prompt Describe a historically significant piece of jewelry in your world. What stories does it carry?

Oo I love the idea that it has a hidden mechanism to deliver poison or an antidote. That's a really cool little feature. :D I like also that the enchantment is well-known. Kind of like "If you're going to try to kill me, at least be creative."

Wonderful article! I wonder though what happens when the head of the house unexpectedly dies before they are able to pass on the secret knowledge of activating the ring. Is there a plan B in case this happens?

Hrm, hadn't thought about that. I'll have to figure that out.