The Scarlet Death of Kuthary

Pandon waited nervously in the plain, featureless room. Today was the day all of his tireless studying paid off. His talents had been recognized and he would finally see the fabled crimson gardens. The small door opened and he nearly jumped. An older female halfling walked in, her graying hair tied up in a tight knot at the top of her head. She closed the door behind her before turning to look him up and down.
"Mmm, You are the new Tender?"

She cut him off with a sharp gesture, "No names here, child." Her eyes were hard, "Some secrets are kept even from each other."

Her features softened with a smile as she beckoned him to the door, "Come."

Pandon was torn between his excitement and fear of the unknown. He managed not to run past her when she opened the door. The scent of loam and fertilizer assaulted him as he entered what was obviously a storage room of some sort. Sacks of soil and fertilizer, pots, gardening tools all were arranged neatly on shelves and pegboards. The glass door opposite the one he entered made his breath catch. The older woman walked straight to it and held the door open for him, a knowing grin on her face.

Red and vibrant green were all around him as he stepped into in the hot, moist air. Rows of carefully planted Crimson Haldi were on either side of the walkway. The ceiling looked like an odd contraption of glass and shutters, allowing the Tenders to adjust the amount of light that came into the greenhouse. Never had Pandon ever seen anything like this before. The flower he had so longed to gaze at was finally before him and he couldn't stop the tears from flowing down his cheeks.

Flowering Plant in the swamps of Kuthary. Known for its poisonous properties.

The plant grows on tall, thin, woody upright stems that do not branch. The leaves are thick and waxy, Subulate shaped, palmately compound with five leaflets that are smooth edged with parallel veins, and a deep green color. Each plant produces a single flower that is a bright crimson color with five petals. Five stamens of a bright yellow color surround the central Pistil.

Each plant creates only a single flower. Pollination occurs when insects or birds come to collect its nectar. Once pollinated, the pistil begins to harden and the petals wilt. The stem droops to face the growing seedpod towards the water. Once fully ripened, the seedpod opens and drops the small pellet shaped seeds into the water below. The seeds float through the water and are typically eaten by the local wildlife.

Show spoiler
The digestion eats away at the hard outer shell of the seed and passes through the animal's system, releasing a slow acting poison that eventually kills the creature. The seed is able to sprout inside the decomposing corpse and use it for fertilizer. Because this is typically underwater very few have knowledge of this last stage of seed growth.

Crimson Haldis require extremely moist, swampy ground to grow. Seeds are able to sprout underwater. Due to lack of sunlight in the swamps, it derives most of its food from the soil and water. The dark leaves are able to absorb what little light is able to pierce the gloom. Attempts to transplant or grow Crimson Haldis outside the Kuthary Swampland have failed, with plants either immediately dying or seeds failing to sprout.

House Haldi are the only ones who have managed to cultivate the Crimson Haldi and retain complete control of it. The plant is very rare in the wild, and any specimens that are found are quickly confiscated. The Haldi gardeners are kept covert, and the location of the gardens and nurseries are one of their greatest secrets.

Show spoiler
The key that House Haldi figured out was that the outer shell of the seeds needs to be eaten away before the seeds will grow. They have perfected the art of harvesting the seeds and treating them so they will sprout. The plant also requires a specific balance of water, soil, light, and nutrients for it to survive. These are key mixtures found only in the Kuthary Swampland

The plant is, on its own, a seemingly harmless rare flowering plant encountered deep in the Kuthary Swampland. Long ago the forbearers of House Haldi discovered a method of using the Crimson Haldi to make a highly effective, fast acting poison. This method has been the family's closest held secret ever since. Many have tried to create their own method with what few specimens exist outside the House's control, but so far all have failed.

Show spoiler
The poison is actually a part of the outer coating of the seeds, though is only a mild, slow acting poison. Through refinement, the house alchemist have figured out how to concentrate this poison. 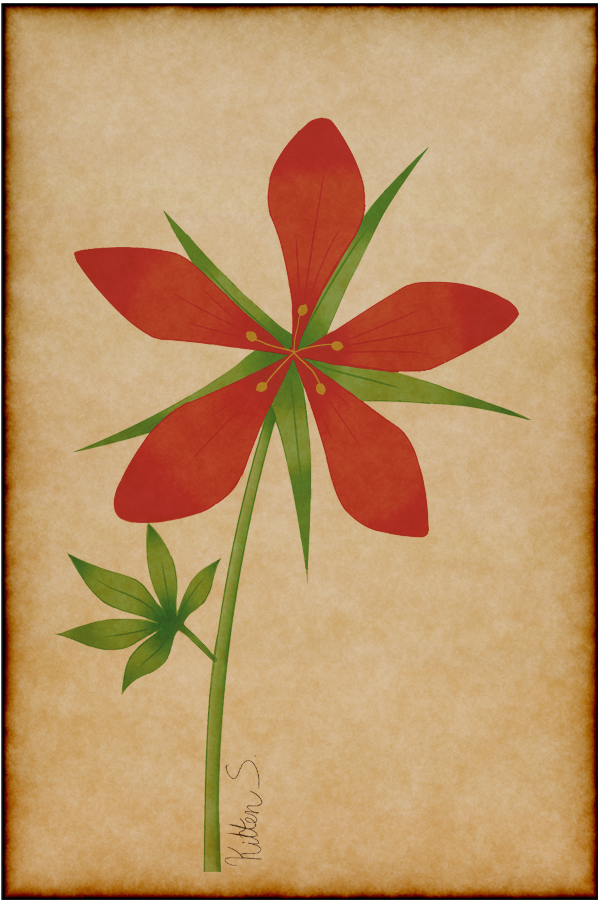 For many, the tall spindly plant looks like a weed until the single bloom opens reveling the crimson flower that is its namesake. The faint aroma of this flower is a mildly, sweet scent with a hint of something metallic.

The ruling house of Kuthary is the Haldi. They use the five petaled flower of the Crimson Haldi as their house crest. It was the founders of the house who first domesticated the flower and invented the process of creating the Haldi Poison. When asked, the members of the Haldi claim that the flower was named after their house, while others say the house was named after the flower. In either case, it was control and use of the poison that allowed the Haldi to rise to power in Kuthary and remain its ruling house for centuries.
Submission for the Peculiar Plants challenge.
Flora

Loosely inspired by the Hibiscus Coccineus flower. Thanks to Kitten Saphire for the commissioned artwork!

I really like the added information in the spoiler sections, as it is information not many people know. It's a really interesting plant. I like all the details you've added that make it come alive.

The article is really great but BUT I have to say this - the headers separation is .. wow ! VERY NICE my dyslexia thanks you

This is a really interesting plant! I like that you hid what isn't commonly known behind spoiler tags, and it makes a lot of sense that the house of Haldi would do its best to protect such a secret. Nice work!

I love the crisp, clean layout of the page. Great CSS work!!   The spoilers are great - and I can see how they should be "earned information" to any Player Character in your world.

Nice article! I like swamp plants :D   Very interesting information you have in the reproduction spoiler section. I really love how your plant is reproducing! I wonder what are the implication for their cultivation. Do they have to use lots of animals to mimic what's happening in the wild?   Do you have an estimation for the number of plants House Aldi is cultivating and how many of them they need to make one dose of poison?   If you managed to make another illustrations, I'd appreciate seeing what the leaf actually looks like - either as a quick drawing or as a picture of something similar - because I always struggle to picture stuff from descriptions.   Otherwise, you have typos on "poison" (posion) in the reproduction section and "nutrients" (neutrants) in the domestication section.

Poison flower is awesome! I like how you've revealed all the important information -- the whole cultivation process, the uses of the plant, etc. -- in an unusual way. Also, your CSS with the sliding left column is killer, and I may have to pick your brains on how to do that. :D Nice work!

Lovely imagery and the additional information in the spoilers and layout are phenomenal. Well done! I'll have to look over a few more articles!

Such an interesting article! Great layout and nice image that you added. The spoiler sections and the extra information to the right where a nice additions as well. Nice work!

Awesome article, great work! The layout is so beautiful. The reproductive cycle of the plant is also nicely detailed and well thought-out.   I was wondering how House Haldi discovered the potential uses for the plant considering that "because this is typically underwater very few have knowledge of this last stage of seed growth"? You might think it makes more sense in another article, or perhaps adding that connection to this article would work, too; either way, I'm interested in learning more about that bit of history.   Great work! Thanks for the read.

Hi Lethann! Wonderful article with a straight forward presentation brought to life by your introductory story. The commissioned art piece is great (both visually and that you supported an artist) although my personal favourite is the background image you've chosen.

What goes around, comes around, so that house had better be careful they don't all get poisoned by a dissident.