The Turathi Empire was once the most powerful civilization known in Rynn. Superceded only by the Titans and the supernatural kingdoms long forgotten, The Turathi Empire's reach stretch across the Halien sea and its straights. At its peak, it claimed dominion over nearly most of the known world.   In time, though, the empire and their masters, the High Warlocks overreached and their power fell with each successive generation thereafter. Eventually, kingdoms like Svain broke away, and led to the eventual dissolution of the empire.   Now, all the remain is a confederation of Petty Kingdoms that vie for control over the empires once great heartland.

The Turathi empire, as it is remembered, was renowned for its rule under the stewardship of their Emperors, the High Warlocks. According to historical records, the first High Warlock and Emperor was Avveus, the Exemplar. In forging the Empire to what it would become, Avveus built the foundation of its ruling heirarchy.   The High Warlocks were the children of the Pact Makers, a marginalized group of Pargothi mages who has grown dissasified with the rule of the Chosen, and the subsequent fradulent appeal to their power. As such, they sought to liberate their people from this system by seeking a means to imbue the populus with the same or equivelant power, and with it, authority to govern themselves.   After a brief period of dynamic change, the empire formed, with those possessing the magical (and therefore auspicious mantle of authority) selected as the custodians and rulers of the empire. The High Warlock represents the pinnacle of those who have mastered both the arts of magic and the arts of statecraft.   Each title, both the High Warlock, and Emperor, denoted different institutions that were led. High Warlocks were the leaders of Collegium Primus. The Collegium was the institution responsible for recruiting, training, and regulating arcane users within the empire. While smaller than the rest of the empire's bureaucracy, its importance was such that it had always apart.   As the Emperor, the rulers were responsible for overseeing the more mundane aspects of the state, primarily the military, treasury, and the senate. While there was a period of time where the senate held significant power, its influence quickly waned as the Emperor's came into their own. Less than a century into the Empire's formation, the senate was quickly reduced to little more than a court of petition, and perhaps the only genuine means for the populous to have its concerns heard for redress.   Both of these offices were situated in a single ruler, thus adding to the mystique of their power. Beneath them in each institution, respectively, were an assortment of Vizers, Generals, Senators, and other senior administrators who managed many of the daily affairs within the empires domain. Despite the High Warlocs supreme authority, their time was still limited, and in the later years of the empire, many of these senior officials were often considered to be the true seat of power for some. It is rumored that the conflict between these expert administrators and the High Warlocks is what helped cause their downfall.

The sum total of the Empire's history is perhaps too vast to ever recount in full. Still, among its many acomplishments was the solidification of records, including several works on its historical formation and operations. Below are brief summary of several key periods around the Empire's rule.   Pargothi City States (Pre-Empire) The origins of the Turathi empire are found in the ancient Pargothi tribes and the five City-States of the Chosen. The first peoples of Southern Kreata are believed to be the scattered remnants of the ancient warriors and survivors of the Daemon War, after the Age of Enkindling. The exact timeframe is unknown, but we know that there had been several small kingdoms that rose and fell among the Pargothi.   Conquest of Euramyer (Early Empire)     Dominion of Turath (Mid Empire)     The Expanse (Late Empire)     The Fall (Twilight Empire)

At the height of its reign, the Turathi empire held dominion over most of Kreata, as far east as the Aegian mountains, north inland toward the Kajatopka Mountains, and as far south as the northern shores of Esor across the Mehanie Sea. In addition, the empire also established new colonies on the Eastern shores of Orela, which would eventually rebel, leading to the empires destabilization.

"One Law, One People"

The Spire of Regnum

Just wanted to say that this is one of the cleanest, most elegant looking worlds I've discovered yet. Brilliantly done. 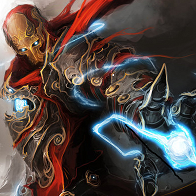 Thank you. Working on more cool stuff in time.

One perfect step at a time =)