"You'll be wanting passage through the Gate Tree, aye? Well, it'll cost ye. Them pilots knows the waters better than anyone, and for good reason. I'm 'minded of some ol' captain who thought he'd try his luck on 'is own. Gave all of us some proper laughs, watching his ship wander round in the currents and getting blown this way an' that. Well, 'til she capsized and all hands lost.... aye. Get yersel' a pilot. Trust me."

The city of Altruis is bisected by a broad river that runs from Lake Myoniene in the east, to the gulf of Kyraris in the west, where the waters continue through the Altrusian Straits to the ocean beyond. Throughout the history of Altruis, it has been a vital part of its economy, allowing ocean-going vessels to access the city, and being navigable via a canal with locks to all but the largest ships up to Lake Myoniene itself.   Since the arrival of Altruis in these realms it has also gained increased importance, as where the river runs through the city is also the site of one of the largest Gate Trees known to humans, and an important focal point for trade and exploration.

'Phatupous' is an old Altruisan word for 'broad' or 'wide' and is thought to refer to the size of the river as it passes through the city. Within the city itself, it is generally just referred to as 'the river'. The wide plain through which the river meanders is known officially as the Phatupous Plain on the maps, or just 'the plains' to those that live there.

The Phatupous river is not very long, barely 10 kilometres in length, but is quite wide, approaching 300 metres as it passes through the city of Altruis. It meanders quite a lot as it travels through the loose loam, and regularly floods the land around it, as meltwater from distant mountains drains into Lake Myoniene. This makes the area upstream from Altruis highly fertile, with a lot of the food necessary for the city being grown there on large farms. Quite a large proportion of the nobility in Altruis owe their wealth to the land that they own upstream and consider themselves the 'true' nobility of the city, as opposed to the newer class of nobles who have made their fortune through trade.

Mosi-oa-Tunya; inspiration for the Iasetta Falls
by Diego Delso
The river drops almost 100 metres in elevation as it passes through the plains, although most of that drop takes place at the Iasetta Falls, a wide and impressive waterfall less than a kilometre from the outflow of Lake Myoniene. Whilst this originally made the river impassable for ships, a canal with locks was constructed about two hundred years ago, allowing vessels access to the lake. Food and raw materials are transported downriver to the city, with people and manufactured goods moved upriver.

For almost all of its length, the flora and fauna of the river is identical to that of the rest of the rivers of Altruis; fish such as salmon, perch, sturgeon, pike and eels, mammals like beavers, voles and mink. Lake Myoniene is freshwater, and until the creation of the canal, was effectively isolated from most of the river by the Iasetta Falls, giving it a unique ecosystem of its own. However, intrusive species from the river have begun encroaching into the lake. 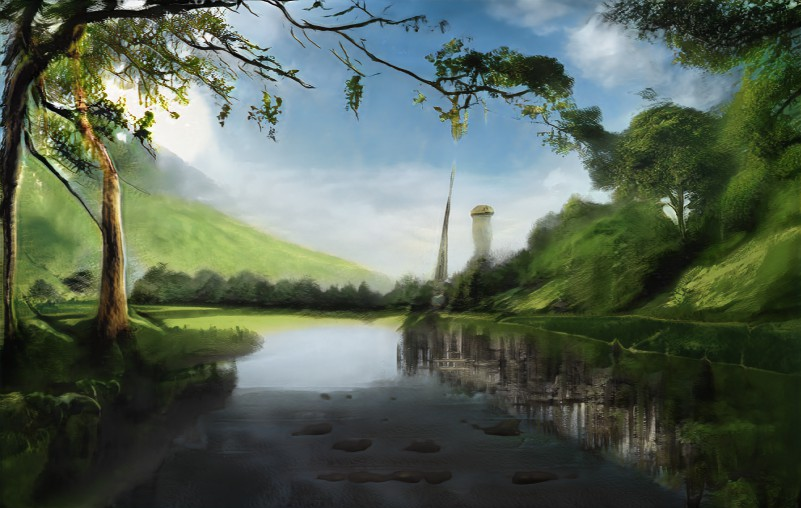 Banks of the river Phatupous by Xah using Artbreeder
As the river approaches the city of Altruis, the environment changes; mainly because of the brackish nature of the tidal flow from the gulf of Kyraris, but also because of the different ecosystem through the portal in the Gate Tree. The ecosystem on the other side is substantially different to that of Altruis, and the two compete constantly, with intrusive species on both sides. The city itself does not help in this regard, and the pollution from the large population has severely affected the quality of the water.

Where the Gate Tree stands, the river has an unusual flow, given that the direction of the river on the far side is the opposite to that of the Phatupous. The current has a tendancy to create eddies and unusual whirlpools, often unpredicable in nature, and the wind can blow through the gate in odd ways. Altruisian pilots are therefore in high demand for their abilties to guide ships safely through the gate and back again.

The river has always been important to the city and nation of Altruis, not least because of the fertile sedimentation that it desposits on the farmlands around. Records prior to Altruis' arrival in this reality have been lost, but historians are confident that the city's importance and scale are only possible because of the river. Since the growth of the Gate Tree, this importance has only been heightened, as the world that can be accessed through the portal has several important Gate Trees of its own, allowing for further travels to other worlds.   When the Gate Tree first emerged from the river, only a couple of years after Altruis' arrival, the pace of its growth alarmed the city authorities, and plans were original put in place to destroy it, lest it prove dangerous to the city. This debate intensified following the incursion of Shardloss in 8 AA, but the emergence of magic using individuals, the discovery of other trees scattered around the nation, and a forwarding thinking faction that pushed for a 'wait and see' approach, allowed the tree to flourish. The appearance of the Gate was another shock, but its potential was quickly realised.
Altruis
Open full size
The Kingdom of Atruis 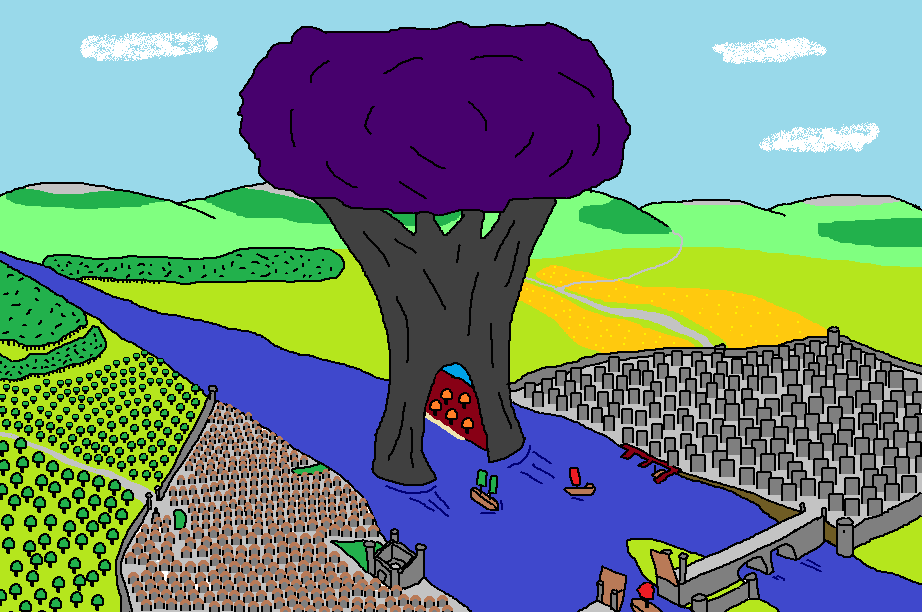 I like how succinct this article is. It isn't too long or overwhelming with details, but you still managed to say everything that needed to be said. The quote at the top is also a great touch, adding character and life to the river.

What a jerks with spreading pollution... -_- Time to throw rotten eggs at them.

I love the level of detail. The article comes across with some character to it and a hint of further depth to the world.

Nice article! The concept of the gatetrees is pretty interesting and it is nice that you thought of the effects it can have on the river and its ecosystem.