Roxanne is a native of Aeria. She was accidentally caught up in the chaos when Keriya Soulstar and Fletcher Earengale fled their childhood home after the Ceremony of Names, and left with them. During their journeys through Allentria, she befriended both of them.   Albeit reluctantly, Roxanne accompanied Keriya on her travels, eventually ending up in Noryk with her and Fletcher. When Keriya was conscripted by Empress Aldelphia Alderwood, Roxanne elected to join in on the quest to find the last dragon in Allentria. She became the group's bodyguard, and remains one of their strongest, fiercest fighters even after the addition of many other creatures along the way.

Upon leaving Aeria and entering Allentria, Roxanne's wielding abilities sharpened and she began to develop new powers. As a Tier Ten earthmagic wielder, Roxanne has the ability to connect with the core of her power, lifemagic. She is one of the rare people whose heightened powers allow her to hear the thoughts of animals.   Like the development of her regular wielding abilities, her Mindspeech abilities came on fast and she learned to master them surprisingly quickly. It has made her more empathetic toward animals as well, and she has learned to treat them as peers rather than as tools.

Roxanne is the only child of Hiram and Lilienne Fleuridae. Hiram Fleuridae is a powerful wielder, and is one of the Elders of Aeria. Her family is held in high regard, although Roxanne herself has always been the black sheep of the family, looked upon askance by the other Aerians for her recurring misbehavior.   This is a result of the abuse she suffered at home. Her father -- sometimes in an effort to discipline her, sometimes simply for cruelty -- often brutally whipped her arms. Her forearms are now covered with scars, and serve as a reminder of what she suffered. Though harsh punishments were routine and common in Aeria, and Roxanne grew up in a culture where that sort of brutality was not only embraced, but oftentimes encouraged, she never allowed herself to believe she deserved the abuse. Thus, when caught up in Keriya's mad dash to flee Aeria, it ultimately wasn't difficult for Roxanne to leave her family and her home behind and venture into the unknown.

Like all Aerian children, Roxanne was put through school and taught how to wield her magic. Unlike many of her peers, whose educations were designed to prepare them for eventual professions they'd have in society after they came of age, Roxanne's education was intentionally stymied. She was a powerful wielder -- and became even more powerful when she reached Allentria -- and the Elders feared her power. Had she been male, she might have risen to greatness; as a female, however, she could achieve no positions of leadership. Thus, the only recourse for her schoolelders was to stifle her abilities.   Roxanne loved magic, and believed it represented beauty and freedom. Her powers could not be repressed, and even without a comprehensive education, she learned to harness and hone her powers. She is a naturally gifted wielder, and though she isn't a mage, she is creative, meticulous, and merciless with her spell-weaving, which often gives her an edge in magical battles.

The abuse Roxanne suffered at her father's hands have left mental scars as well as physical. Roxanne's method of dealing with this trauma is to repress it, ignore it, and pretend it never happened. A great deal of shame has attached itself to her experiences -- she knows she is a more powerful wielder than her father, and she is ashamed of the fact that she allowed herself to be beaten and mistreated for fifteen years.   This, of course, is not a healthy coping mechanism, and Roxanne's repressed trauma often manifests in a short temper and bursts of rage.

Though Keriya and Roxanne have had a rocky history, and initially were antagonistic toward each other, they now each hold the other in the highest regard. 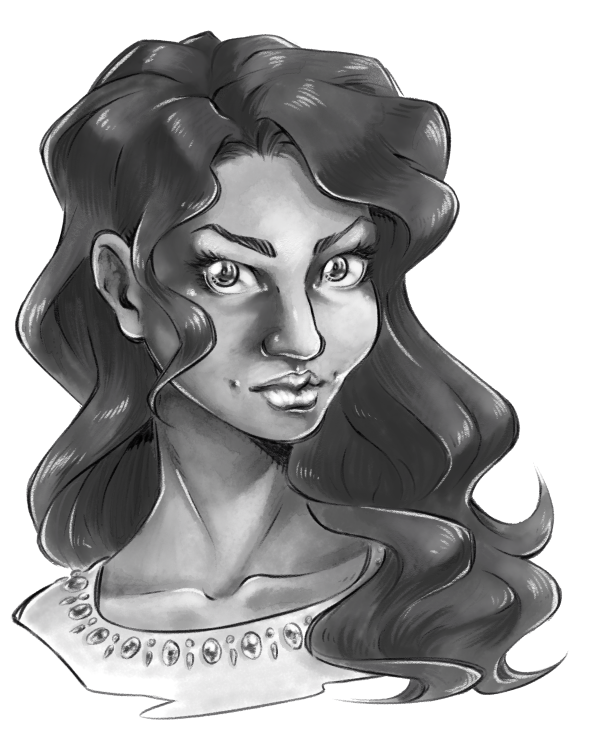