Sperrgebiet is a German word. Originating from the time this area was a colony of the German Empire. Sperrgebiet is a composition of the words sperren and gebiet. Sperren translates to to bar (entry) and gebiet to area. Making Sperrgebiet, restricted area in English.

Stretching along the west Atlantic coast of Africa from the border with South Africa in the south going north for 320 km up until 45 km north of the port town Lüderitz. And going about 100 km inland on average. The Sperrgebiet is covering about 3% of Namibia's total land area. But only 5% of the Sperrgebiet is actually used for diamond mining, the rest is kept as a bufferzone to keep people out, as the minging company does not want other people picking up their diamonds. And even after the reclassification as a National Park it remains a forbidden area for people. And you can only visit on guided/guarded tours from Lüderitz.

Due to the very limited impact of humans over the last century, the Sperrgebiet has a wide variety of flora and fauna. Almost half of the area is a desert, a quarter rock and the remaining part is grassy patches. There is one permanent water source, the Oranjerivier. The Sperrgebiet is home to almost 250 species of plants that are only found in the Sperrgebiet. And several animals enjoy the relative rest.

There are several late 19th century ghost towns in the Sperrgebiet, some of them forcibly emptied by the minging company. Kolmanskop, Pomona and Elizabeth Bay the best known examples.

Lüderitz was the most important port town of the Sperrgebiet, as the most diamonds were being exported trough this harbour. But the harbour is too shallow for modern ships, and the diamonds get exported by æroplane in modern times. Today it's a fishing town and the only town in the Sperrgebiet with a permanent settlement.

Kolmanskop started as a mining town and was connected to the port town of Lüderitz, 10 km to the west, with the first tram line of Africa, when the diamonds started harder to find and then when an even bigger diamond deposit was found more to the south miners moved out. Today Kolmanskop has been transformed in a tourist attraction by the Namdeb Diamond Corporation. And sometimes it is used as a film set.

Pomona was another mining town, 15 km south of Lüderitz. Which was the only mining town not controlled by the Deutsche Diamantenggesellschaft as it was started before the German Empire assigned the monopoly. The first world war ended their independence and since then they have become part of De Beers.

The youngest ghost town in the world, located 30 km south of Kolmanskop, the town was created in 1991 and abandoned again in 1998, rising and falling with the opening and closing of the mine nearby. Nowadays it is home to a large colony of Cape-fur-seals. 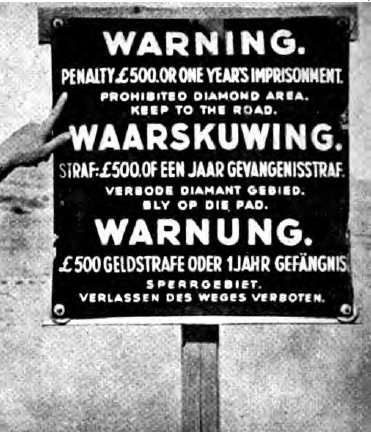 Rose and Jan de Jongh were both on deck, well the entire crew was on deck. But they were both staring trough binoculars towards where Elizabeth Bay was supposed to be. The night was pitch black, there was a thick cloud cover and even if there was a sky to be seen, it was a new moon. They had doused all lights on deck, even taping off some of the standby LED lights of the navigation equipment.

There where only two jibs and the main and mizzen out, the rest of the sails of the Sunset Dawn were stored. And Bobby was standby in the engine room. Everybody was a bit nervous after what happend in the Bay of Guinnee.

Suddenly the silence was broken by a voice from the water, and half a second later they could see the small boat, that was silently coming their way. Electric outboard engines, Rose spotted. After exchanging the passwords, the crew made quick work to haul the bags on board. And within a minute the rendezvous was done and the Sunset Dawn was underway again, now loaded with several potato bags filled with rough uncut diamonds.

To Rose her surprise Alejandro had managed to trade fish with the boat, that was or was posing as a fishing boat, in the short moment they were alongside in the pitch black of night.

Answering: "an inhospitable region or geographical landmark"
Visit Jacob-W's Competition Page Check all other answers to this prompt Competition Homepage

Exciting! Diamond smuggling!   It would be interesting to show a map later on :D

:D now you know where the diamonds on that dress come from ;). I might do a map. But from character perspective this is a stop and go location.