The Saheels are crocodilian humanoids native to the long lost jungles of the Primeval Expanse before the wrath of Shadiym transformed the region into the dried wasteland of the Parched Expanse. Their people are one of the original primal races of Haven and have been guided for eons by their deep shamanistic beliefs in the power of the Great River. As one of the oldest and most cultured people on Solith, the reptilian Saheels have traditions dating back to the age before Humanity and lessons as old as the stubbornness of the Udirkith. They are feared and even hated by Beastfolk and Manfolk alike for their sordid history and alien way of life. 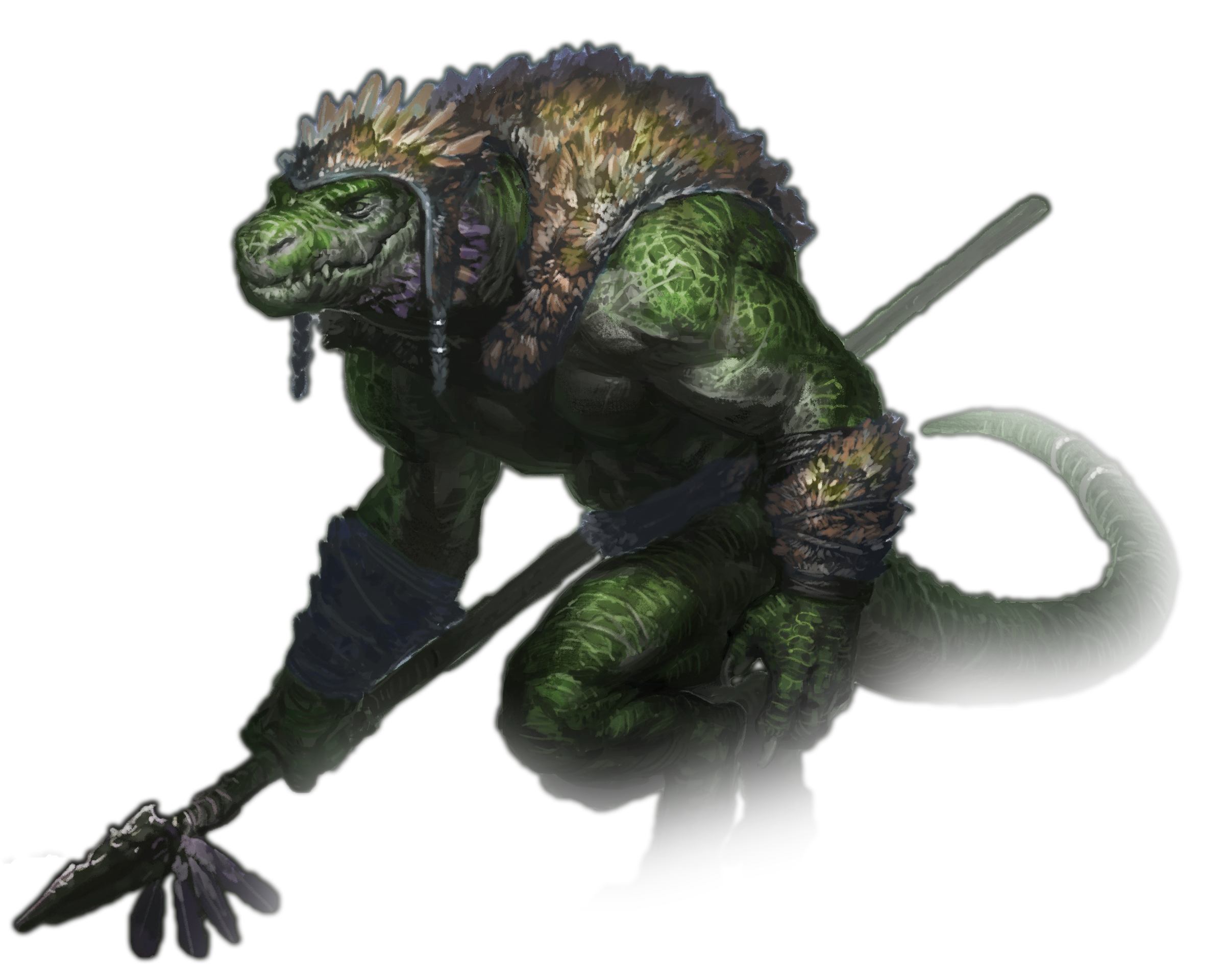 The Saheels of Solith saw their beginning in the dense jungles of the Primeval Expanse before its desolation at the hands of Shadiym's great maw. This noble race of massive reptiles dominated the southern peninsula of Haven and were feared by the Beastfolk for their vicious appearance, crude mastery over metal, and the formidable threat posed by Saheel warriors. Even before the Shardtooth Range rose to cut off the southern peninsula, thick vegetation and impassable waterways isolated the region from the Verdant Expanse. This isolation allowed for the sophontic jungle predators to assault the lands of plenty from their impenetrable home and forge a kingdom built upon their enemies' bones.
In this isolation, the Saheels thrived and grew into a burgeoning kingdom that erected great monuments to the exalted Selt'Ama, and constructed vast cities on the backs of their captured slaves. The great reptiles were the first and only Beastfolk to learn the secrets of working metal on their own and used this knowledge to slaughter any who dared encroach on their land. Those who did not fall to their cruel blades met a fate worse than death for those the Saheels captured were forced into the chains of slavery or fattened as prized cattle. Only the Centaurs rivaled the Saheels as the only other truly civilized culture on Haven and would rise above them after the demise of the Primeval Expanse. If not for the First Men's arrival in the Jagged Expanse and their later machinations against Shadiym, the hidden civilization of the Crocodilefolk may have risen to become the lords of the Beastfolk and perhaps of all sophontic life on Haven.
Sadly, this was not their destiny for their civilization was wiped off the face of the continent by the great leviathan's fury. Now they survive in the underground waterways that stretch beneath Haven, hiding from the civilized world above and clinging to their ancient prophecies. As their people reach the end of the Book of One-Thousand-and-One Visions. and with the demise of their last oracles looming over them, their people once again travel the surface world. Adventuring Saheels now leave their brood nests to scour the land for the omens laid out by the Great River and its prophets. All done in their most desperate hope that the coming end of their collected prophecies does not mean the end of their species and that a chance still remains that they will usher their people into a new golden age and return the Saheel kingdom to their broken people.

Lifespan
40 to 65 years old, maturing at the age of 14.
Average Height
6 to 7 feet tall.
Average Weight
200 to 350 pounds.
Average Length
8 feet long when measured from snout to tail.
Related Ethnicities

Unlike most other species, the Saheels have learned to identify one another solely through their sense of sight and smell. As they birthed in communal clutches, a Saheel's name is a treasured thing taken from among their most sacred collections of prophecies and insights: The Book of One-Thousand-and-One Visions. To some, these names may seem nonsensical but, in fact, reference lines or even entire verses of prophecy. Because of this, many young Saheels struggle to live up to their namesakes and translate their name into Verd. Their Ignan name, or Saiassi, are only used when solely in the company of other Saheel, and it is considered extremely shameful for a Tsieas to speak their Saiassi aloud.

The Godbeast of Hunger and Cold-Blooded Creatures. 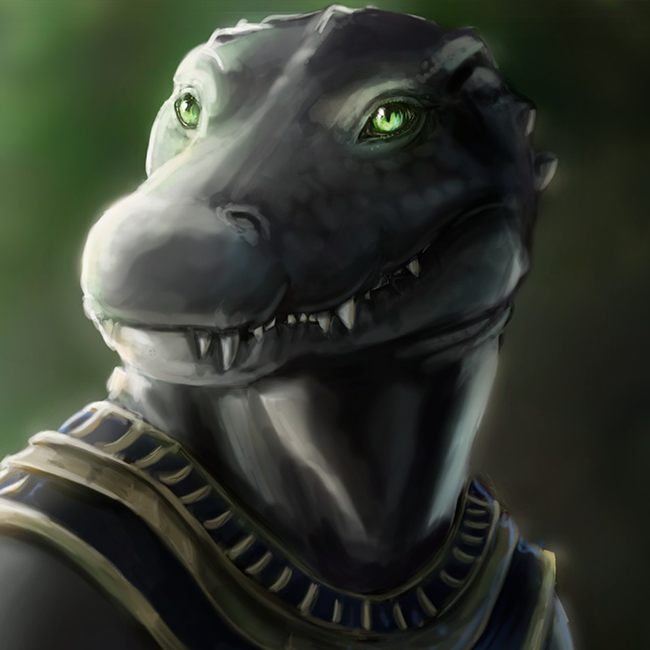 Saheels have an unmistakable, broad-chested silhouette giving them their common moniker of walking crocodiles. Each of these jagged-toothed brutes can rear up to heights of seven and even eight feet tall, but their slouched gait makes them appear much smaller. Their thick, scaley hides come in shades of green or brown and act to shield them from harm. Their natural fortitude makes them devastating ambush hunters in the murky waters of their homes, while their fanged maws serve as their first and most trusted weapon. In the heat of battle, Saheels can even draw upon strength extracted from the blood they spill and the flesh they rend. Their mighty bite, impenetrable hides, and skill for bushcraft make them some of the most fearsome warriors on the continent in nearly any situation. Only the Grisgari are able to rival the Crocodilefolk's sheer physical presence and combat adaptations, while the Pangarans are the only sophonts of Haven that can ever hope to match the naturally cunning predatory instincts of their warrior caste.

When creating a Saheel, remember that though you may come from a line of vicious monster, your culture is rich and deep. You are not primitive by any stretch of the imagination, but you are superstitious and harbor a deep reverence for the Great River and its Oracles. From a young age, you were trained to survive and taught to live as one with the land. Your people's sole dream is to see their greatness restored and fear the looming end of their cataloged prophecies.

Oracles and prophecy have guided Saheel society since the days of their primal kingdom and the height of their Philosopher Kings' power. Their wise leaders were blind to the chaotic world of the shore but could instead see deep into the Great River. They learned to use mere handfuls of the river's great waters to glimpse into the shifting possibilities of the future. Saheel oracles became so skilled at their art that many believed they could bend fate itself. This widespread belief instilled a deep trust in prophetic visions among all Saheels, and to this day, they select their leaders from among the blind and prophetically gifted.
Few of these oracle bloodlines have managed to survive the cataclysm that claimed their kingdom, the many Beastfolk purges, and the horror that was The Fall. The Saheels of today cling to their ancient ways through the centuries of recorded prophecies held within the Book of One-Thousand-and-One Visions. Though they rapidly approach the end of this collection, they believe that should they remain faithful to their ancestor's wisdom, that the former glory of their people will return. Though their cities may be forgotten ruins, young Saheels are still taught the same lessons and virtues as their ancestors. Including how to hunt, forage, and all the woodcraft necessary to survive in even the wildest of lands. Adventuring Saheels travel Solith in search of prophetic omens with nothing but a long knife and the natural world at their disposal.

Saheels nest in half-submerged mounds of earth and wood, that are piled high and hollowed out from within to allow for dozens of entrances and exits. Each mound stays connected to the greater Saheel community through hidden accesses to Solith's underground riverways. Once found all across Haven's southern coast, these nests of hundreds or even thousands of Saheels exist only in scattered colonies kept hidden from the civilized world and its treacherous sophonts.