Founded in 20AFD, the Byantē Alliance was a large territory West and North West of the Grànousii-an-Ormàszil Ocean and West of The Verdant Hills - Bevérohii. It was made up of Foyii / Woodsmen, Paràntii, Elelupii and the occasional Kyadii all working to try to build a united, but not uniform, nation.   Although they called themselves an "Alliance", it is not separate nations working together, but the formation of an ideal that all nations should be one nation, while acknowleding and acceping different cultural norms. Looking for the Geography of the Area?
Then head to Byantē Alliance Territory.
^ Article Sections

With the heart of Byantē being on uniting people, most decisions are taken from public votes, then debated and voted on by the Byantē Assembly. Assembly Representatives were elected every Ana to ensure that the Assembly did not stagnate or exceed its mandate. There was no single person designated as the "leader" or "ruler" as joining the Assembly meant taking on the responsibility and repercussions of decisions taken by them all, whether they ultimately voted for them or not. Time was always allocated to each topic of debate with all people groups given a timeslot to air their encouragements of support or points of concern.   A simple majority was not sufficient to impose a law (or remove one) as such a vote meant that nearly half of Byàntites would have felt disregarded. Thus it was decided in the decàna after the Alliance's founding that more than three-quarters of Assembly votes would be required to pass any law. If, after a recount, the number was between a simple majority and three-quarters, then adjustments to the laws would be discussed and passed back to the people before being re-debated in the Assembly.   While this may appear inefficient and highly time-consuming, when people grumbled about it, they did so in the shallowest of senses, as most felt their voice mattered.   ^ Article Sections

While the above worked without major incidents during peacetime, or when the Elements were roughly in balance, times of emergency meant swifter action.   A vote on whether to enter a "PIC Motion" (People in Crisis) did require only a simple majority vote - after all, if half the population felt threatened then that was to be taken seriously. A PIC Motion lasted only one week and could not be any longer. Each week a new PIC Motion vote was held until the cause of the Crisis had subsided sufficiently to return to normal governance.   Under a PIC motion, the Assembly was able to reinforce its borders in the case of a threat of invasion, or conscript Byantē citizens to its Emergency Relief Services, say, in the event of a major flood.
^ Article Sections

Assembly Representatives were, as stated, elected every Ana - which in AFD533 was a period of eleven months. Who they represented was determined by the region in which they spent the most time in the preceding Ana. The Territory was divided into thirteen Jainerdà1:

Included:
Each Jainerd elected three representatives, with the exception of Vyaisùdo and Ghas'hoji who elected five, due to the number of people who lived and worked in Byantē's two cities. Thus, all-in-all, forty-three Assembly Representatives were elected each Ana.
^ Article Sections


Where Did the Assembly Meet?

As space for only forty-three was required, the location changed periodically. Often, though, it was in the main banquet hall in the fort of Ghas'hoji.
^ Article Sections

People have migrated into the area as long as anyone remembers and there have been records of such matters. But at the start there were "pockets" of micro-cultures made up of varying species creating their own tribes or clans. Elelupii travelled West for exploration and business expansion, Kyadii, (mostly of Deenfeiss Leen origin) arrived from the North in search of warmer climes and Paràntii have always lived within the Erdàn Blànvyta. Many arrived to escape their previous lives - for varying reasons - or to forge new lives as Prime Explorers, those who trod new ground.   ^ Article Sections

While many of its earlier inhabitants congregated around the natural freshwater sources, one contingent followed the rivers South until they met the Grànousii-an-Ormàszil Ocean, picking up other trailblazers of varying ages and races along the way. Thus was Vyaisùdo founded, shipbuilding developed and the Inēl-dys-Ghàsii bay and dock constructed. These "Sea Founders" are attributed with the establishment of Byantē as we know it today, as other villages and the city of Ghas'hoji would not have been possible were it not for the provisions of the Ocean and the trading opportunities that seafaring brought the region.   Moreover, the principles underpinning the Alliance - namely that all people groups and races be included, was set in stone as a result of the Sea Founders' southward journey.
^ Article Sections


Of Dragons and Dragonets

Watching and guarding the mountains that lead to the Unknown Lands (Erdàn Rensavànii) are the Dragons of Blànvyta, or how they pronounce it: Blàvyt. It is said that the land around Dragonwatch was where a historic battle between Dragons (or Skàlmàrii in Foyiitùn) and Paràntii took place and that the Peaceful Ascent was the burial ground for fatalities from both races, planted anew and given over to the Elements.   While the Dragons watch, as Skàlmàrii implies, the nation has learned not to fear but to respect them. Erdàn Blànvyta was first their home before others migrated to it. Thus, when Byantē was formally founded, the Dragons were offered the opportunity to select Assembly Representatives at the same time a peace accord was set (literally) in stone. Given their size, however, it was decided that Dragonets would play that role. Older Dragonets were still one hundred years old or more and would honour their elders' requests if they needed to be communicated with the Assembly.   However, no Dragonet has met with the Assembly to date and their three seats are always empty. So long as neither Dragon nor Byàntite felt threatened by the other, the Blànvyta Dragons felt no need to be there.   That said, the empty seats always served as a reminder to the Alliance that the Dragons' needs should always be considered in all decisions, as they, after all, were a race within the land. Each time a vote was cast, a different Assembly Representative would trek to the Peaceful Ascent to explain the subject matter and record their votes.
^ Article Sections

While Byantē society is religious, or recognises religion, there is not one considered "official". Settled Kyadii tribes maintained their own culture and spiritualism, for example. However, unlike in the Forest of Doon, some folk worshipped particular Elements that they felt reflected themselves. This developed into gatherings in people's homes, or at certain seasons, to celebrate and give thanks to the "gods of the Elements".   Though there is no specific name for each sect, the worship of the Elements has been dubbed Sénakismà.   What is interesting is that instead of faith influencing governance, it seems that the founding principles of governance impacted the expression of faith. Thus there have been no strifes between worshippers of Fyr and Ousii, for example - religious groups respecting the fact that others have different cultures, views and ways of life. Once an Ana, between seasons, an "All Elements Congregation" meets to worship, exchange ideas, make connections and spend communal time understanding other people's faith.
^ Article Sections 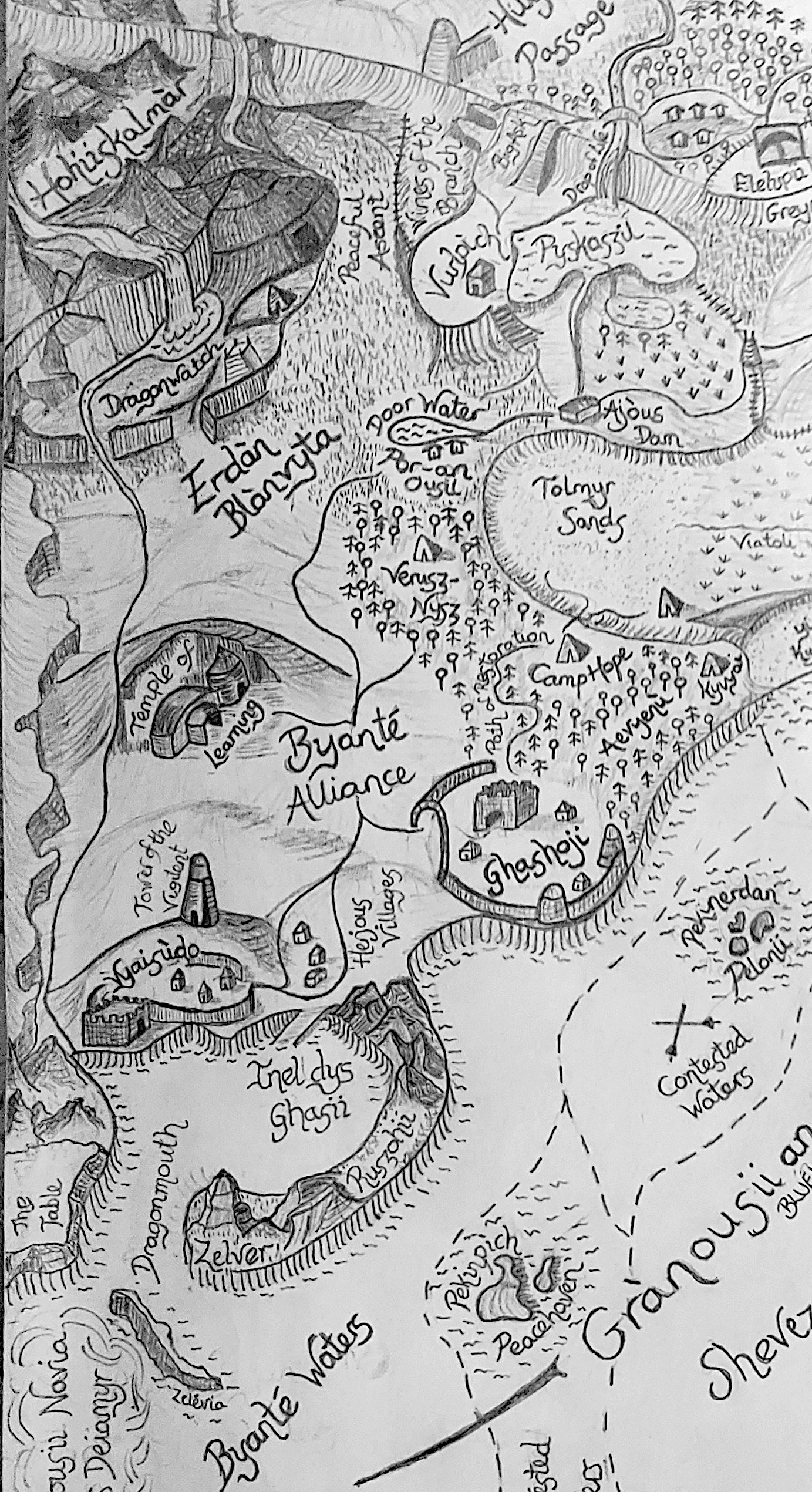 Click/Tap Here to read more about the area.