The perfect mercenaries, that is what the ORC's are. Give them some gold and they do whatever they are commanded to do, never forgoing a given command. It is unknown why they do this or why the do not expand their own territories. They only use violence in defence are when commanded to do so.   After using them in many wars over the centuries the countries of Niorath had to agree on certain rules. Sometimes they were used for quite atrocious acts by the nations in conflict. Now it is forbidden to just give any command to an ORC since it will obey no matter what.
— High Sage Syronikir

ORCs are a rather strange species and not only because they insist on using a name all in capitals. No-one knows why they do this, not even themselves. Some believe it is some abbrevation of some kind. But if it is, it's meaning has become lost in time.   Their civilization is also quite peculiar. They never expand their territories through warfare and are only known to defend them. However, if they are hired by another nation they are quite formidable and obedient soldiers. To this day it is still unknown why they are only capable of violence under certain circumstances. It is even stranger why they not attack Nekorians even if they are hired.

Orc are an incredible strong and hardy species and easily recognised by their green skin.

In general an ORC looks like a human but has a green skin and is larger on average. Another aspect are the two teeth that rest outside the mouth. Almost all ORC are in fit shape and muscular. Only an ORC kept away from his daily routine starts to become weaker.   An ORC has a natural tendency to work out, even from a young age. It is not known why they do this since it is not part of their culture and ORC raised outside of ORC culture have the same tendency.

The ORCs can survive in almost any environment but appear to like the warmer areas of Niorath better. Most of their own territories are near the equator for this reason.

Just like the other races the ORCs have a pretty standard reproduction cycle. A female ORC is however only pregnant for 6 months which is rather short in comparison to other species.   Even though they can reproduce faster they never seem to overstretch their resources. In times of diminished food the reproduction of ORCs stops automatically without them even doing anything. Scientist are still not certain as to why this happens. 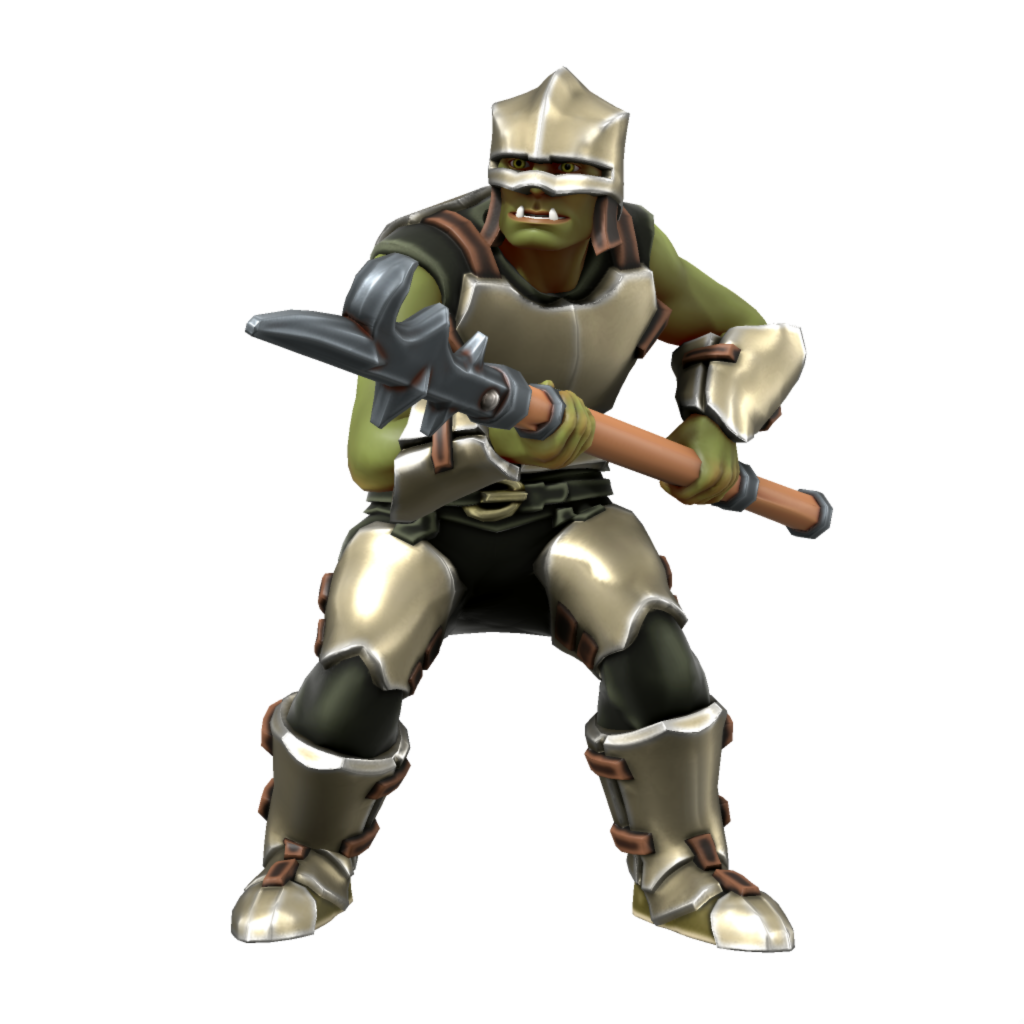 Orc Soldier by Kefkejaco with Heroforge

Strangely enough the ORCs don't worship any gods in general. If they worship any pantheon this is often caused by nearby religions that seeped through. But even if there are some followers of a religion in a settlement, the vast majority still thinks it is not important to their day to day life.   Some, however, argue that their obedience towards orders can be seen as a form of worship. This has perhaps some truth to it since the martial code of the ORC's is the most important aspect off their culture.

Most nations in Niorath tend to follow some form of religion. Somehow the ORCs are different is this regard. From what we know from our studies this is mainly due to lack of interest in things that can't be used in any pratical form.   This lack of interest could also explain why there are no ORC philosophers.
— High Sage Syronikir

The culture of the ORC's is not as refined as most other species. The core aspect of their culture is the martial code they obey to the letter. They almost always obey any given command, even if such a command would go against the ethics of other species. There is, however, a limit to the orders they follow. They will only follow orders from those who hire them and they will never attack anyone from their own group.   Strangely enough they are entirely peaceful when not hired for a violence. Their own territories are among the most safe and orderly of Niorath since crime is almost non existent in ORC society. The only crime in their countries is caused by outsiders and punished severely.

ORC's are very fond of music and they use it for many occasions. Typically a small settlement comes together in the evening to celebrate a new day with singing and playing various instruments.

For their own settlements the ORCs prefer to use wood if available but they are known to use mudbrick as well in case there is not as much wood around. Their houses are rather simple and most often not larger than two stories.   The only large buildings in their settlement are their gathering halls which are often decorated with various patterns carved in the wood. The gathering hall is frequently used for feasts and forms the center of ORC society.

Yamaderis misplaced this image by Kefkjaco with heroforge
The history of the ORCs is quite extensive since they have been used frequently in wars. But even though they are often part of other nations history they have their own.

The exact origin of the ORCs is unknown but they are believed to have been around from before Magicfall. During ancient times they are thought to have lived solely in the northern Mizarin regions.

The first true historic records that mention ORCs are those from the Avaronian Era. During this time the Avaronian encountered the ORCs during their invasion of Pavanor. At first they tried to conquer their nation but this caused such a vast amount of casualties that a truce was signed.   Afterwards the ORCs are mentioned as being used as mercenaries quite a few times.

When the Avaronian Empire fell the ORCs had already been moved all over Niorath by the Avaronians and they made their own small nations across the planet. The largest nation however, Arkhan, in the North Mizarin region, was given to them by the human nations to the north after helping them get rid of the Avaronians.   Over the centuries that followed many nations would use the ORCs as mercenaries. Over time some vile acts were performed by them on the commands of some nations that did not want to get their own hands dirty. For this reason several countries signed agreements to limit what they could order the ORC mercenaries to do during wars.

Going to add a section still that is only visible for those who want to know the true origins and reason for their name.

That's an interesting twist on the orc archetype. My guess is they are some sort of clone-army type of deal!

I will still add the hidden part that is only for people who want to see it. But you are on the right track ;)

Excellent Article. I really like Your take on the Orc race and the Histories of when they were first encountered. I'm not surprised the first Battle with the Orcs was a loss, as they are a very brutal and powerful race with traditions in warfare and violence.   Aemon

Thank you! :D Yeah I wanted to deviate a bit from the typical idea of Orcs :)

Mysterious. Can any random person come up and give an ORC an order? That seems like it could cause some issues sometimes.   Small Child: Bring me candy!

No there has to be a form of agreement first, so they do need to be paid :p and they won't harm anyone from their own ORC group :)

Very interesting people. Is the way they follow order a kind of magical binding or is it just through their own choice because they have agreed to be in the service of someone else for a certain time and they respect honour very highly? I imagine there are still certain limits to what command they would follow, like not attack their own country. Would they attack other ORC group following orders from someone else?

Yes they only follow orders if paid or for some other form of service and also then only for limited time. In general they obey many many rules even attacking other ORC groups. They don't indeed attack their own anyone they see as belonging to their own group though.

A nice twist on the warlike trope of orcs. Perfect Mercenaries, giving them the feeling of a more orderly sort of combatant in a fashion, instead of the general trope they are wild and a bit insane.

Thank you! ^^ Yeah I wanted to have them act differently since I dislike the idea of them just all being stupid or wild :p

Nice! I like the all caps thing... small thing but definitely makes the iceberg bigger. Very groovy

Thank you :) The reason for it can be found in the secret section ;)