"The Cada Cratal Rift is one of the first-ever known Rifts, and the first to be fully understood. As students of spellwriting, you too shall understand it by the end of your instruction. The dangers of Rifts are told of in many rumours, and doubtless you have heard some. But this class is not concerned with such things - we examine the naturalistic evidence of the properties of Rifts. Would you please gather at my desk to examine this copy of a scroll from the late first century - this represents the first ever serious naturalistic study of a Rift."

The Cada Cratal Rift is situated in the centre of Cada Cratal, positioned inside a 500-metre exclusion zone. The surrounding terrain is treeless and flat, but is covered with multicolored grasses, fungi, and molds. There is also a Wardwrit painted in the shape of a pentagram on the ground around the Rift with roughly 300 metre side lengths.   The mixture of unearthly colours and black lettering brings a feeling of any observer being out of place, as though the area was not meant for their eyes and never will be. At the centre of this area is the rift itself, a hovering dark blue diamond-like shape that spins ever so slowly while remaining in place.

The Rift is surrounded by many coloured grasses, mosses, and fungi, which were among the products of it that were not dispelled by the Wardwrit. Naturalistic study of these organisms has yielded many interesting results.

The grasses around the Rift come in multiple different colours and shapes. Typically quite hard and spiky to the touch, each colour of grass has been found to have different properties. Most are useless, a few are dangerous and perhaps two are actually beneficial.   The yellowgrass, for example, is highly flammable and can be used to superheat things if enough is collected - but there is so little of it that harvesting enough of it takes too long for it to be of use. The dangerous redgrass is sharp to the touch and can cause hallucination and paralysis if an individual is in contact with it for a prolonged period. Purplegrass is the most useful of all the riftgrasses, as it grows in abundance and can be chewed to soothe headache or migraine.

The mosses around the Rift are also in multiple colours, although they tend to favour less garish shades than the grasses such as brown, white, grey, and black. As yet no use has been found for these, although the local wildlife of Cada Cratal can sometimes be seen eating them, birds in particular.

There are only a few types of fungi around the Cada Cratal rift, and all are avoided due to their highly toxic nature. During the process of writing the Wardwrit, Sienna Yesana noted that even the Riftbeasts that fed on them fell dead within days, and recounted a tale from a traveller who passed through the area of somebody dying after coming into contact with a mushroom. This was confirmed by visible dead animals laying near the fungi.

The only truly useful natural resources provided by the Cada Cratal rift is purplegrass, which is collected occasionally by locals in head-to-toe covering so as to avoid the dangers of the other plants in the area.

The Cada Cratal Rift was the first to be discovered and is presumed to be the first that was created. First reports of its existence can be found in the few remaining texts of the pre-century, with contemporary historians writing of "a ſudden appearanſe of a fantaſtical object, around which all manner of ſtrangeneſeſ are found." The Rift's properties were not properly documented until the late 1st century, and in this account it is stated that at this time the Rift was active in producing riftbeasts - only minor ones, such as shadowboar and talldeer, but their unnatural natures caused the Cratal area to remain uninhabited for the majority of the 1st and 2nd centuries.   Once it was understood that Rifts were brought into being through careless spellwriting, a group of spellwriters began research into the Rift's properties. This group included the famed Poet Skadari, the prominent early naturalist Sienna Yesana, and the Proseweaver Talas, as well as many others whose names are lost to history. After conducting several studies of the Rift area, Skadari and Talas combined their talents to create the first and so far only Wardwrit. In a fit of inspiration over 3 weeks they composed and edited, before painting the letters by hand onto the ground in the shape of a pentagram. They named the piece Cada Cratal - two words that nobody has yet understood, not even the spellwriters themselves. Upon the writing of the final character, a sound was heard that Talas later described as "a sort of cracking moan, or perhaps a moaning crack - it set the very hairs of my back on end, and I hope I never hear its like again."   From the 3rd month of the year 102 onward, the Cada Cratal Rift was rendered inert - it ceased to produce Riftbeasts and became safe to approach.

The Cada Cratal Rift is the one that all student spellwriters visit during their training, in order to understand the magnitude of the effect that a miscomposed spellwrit can have, and for them to examine the pentagram inscription. These students are typically permitted to venture inside the exclusion zone, whereas most other tourists and citizens are encouraged to remain outside it. Other visitors to the Rift include the occasional Rider troop, and the odd overly curious citizen of Cada Cratal.   Visitors typically stay in one of the many hospitality establishments in Cada Cratal city. 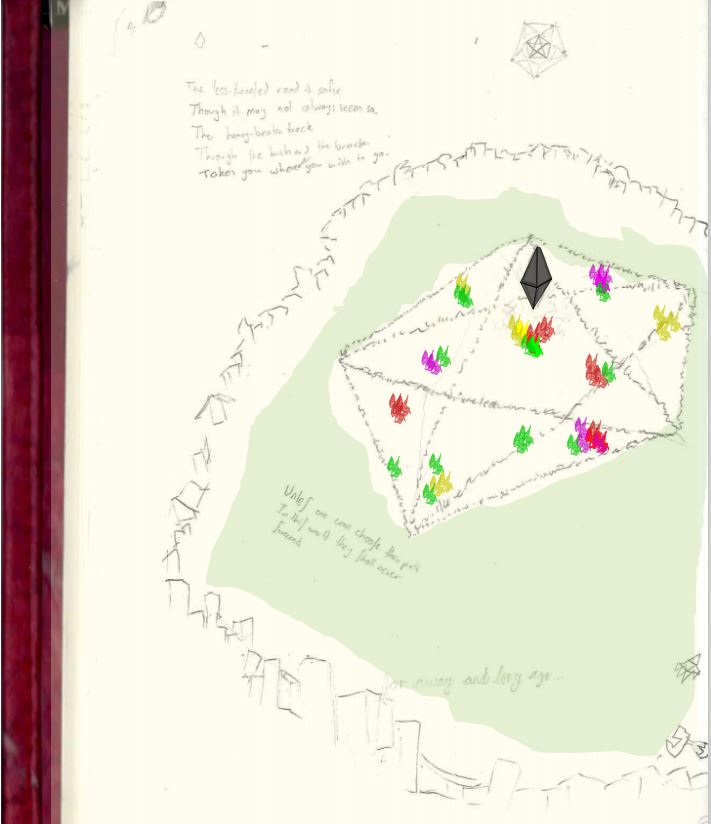 Such a cool place! I really liked all the details that you included, from the grasses, the fungi that eventually renders anyone that eats them dead, to the detailed history of the area.   I would suggest to break longer chunks into paragraphs, as it will make it nicer for the reader.

Thanks so much! Very glad that you enjoyed it. I will get right onto the paragraphing :)