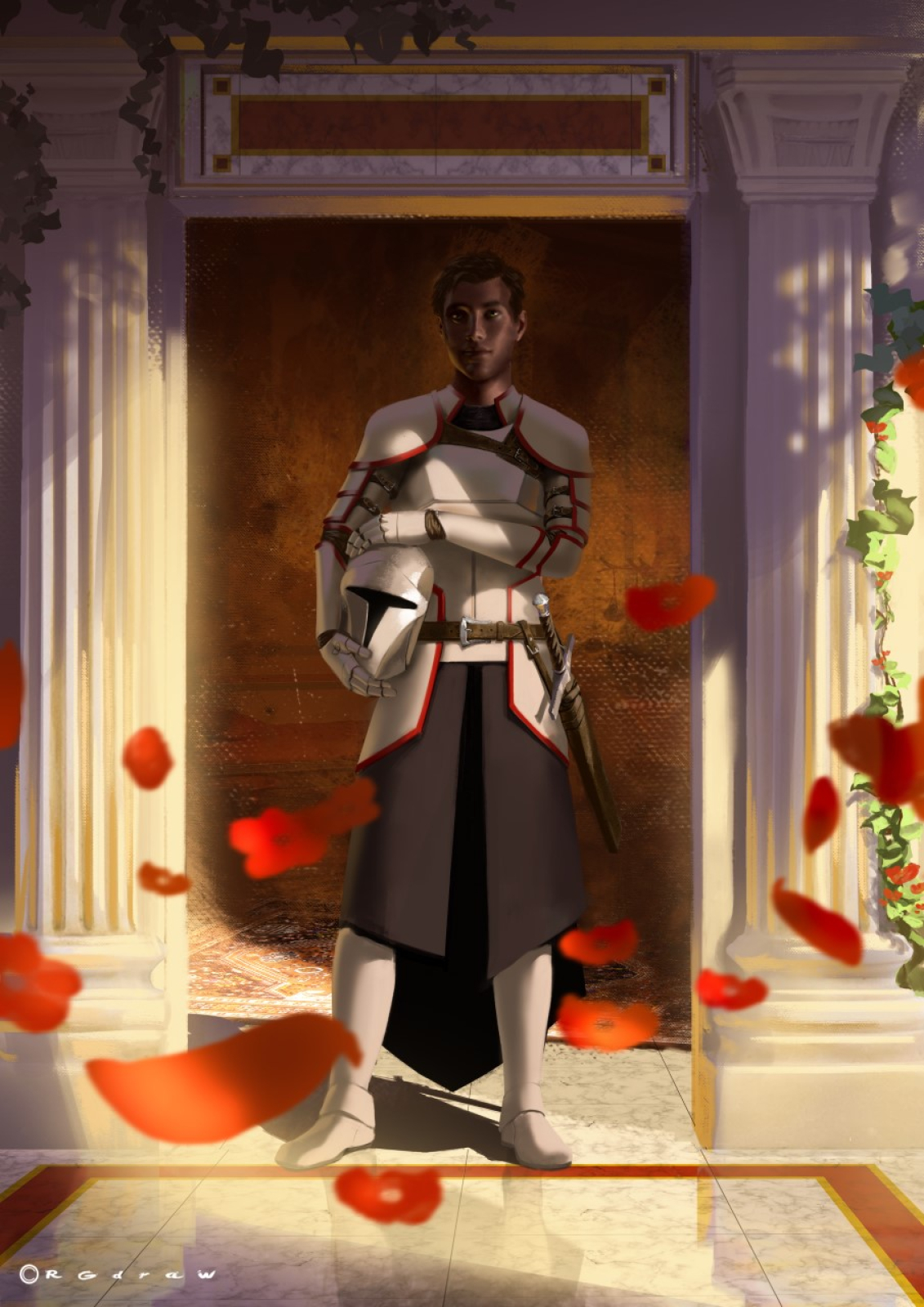 "I have heard stories from the other guards that you normally are very cold and professional over everyone else, I mean I have seen it at that underground tournament, but with me you act in a totally different way, why?”

Azran grew up in the small village of Buan in the southern part of Dercia where his family had a blacksmith, that he would help in after school, not that he ever wanted to become a blacksmith and take over the familiy business so when Azran got old enough he signed up for the legions. He spend the first 2 years of his time in the local legion until he got assigned to the 9th legion and that gave him the option to spend time when having time off in Pearlhal  this is also here he would run into a girl that called her self Ria, Azran and Ria would run into each other a few more times before Azran was assigned to the Imperial Guard  where he would only get to serve around a week and a half before his world would change forever, after having saved Ira from faling out of her cart, and he recognized that the girl he had known as Ria was actually the Crown Princess Ira .

Given the almost ridiculous amont of training he have been through the last 4 years, he is arguably in the best shape and fitness he can be.

He have a rather muscular body.

For a legionnaire he have some very kind eyes, together with his laughter that is easy to identity for anyone who knows him.

When off duty, Azran likes to wear a loose black shirt with some matching pants.   When on duty he of course wears the Imperial Guards uniform/armor.

Azran have received a basic education in the local school, later when he joined the legions he began to collect knowledge and information so that he later on could advance in ranks.

When he was not studing in school he would be helping his familie in their blacksmith, when ge got old enough to join the legions as a Legionarie he would serve 2 years as a legionarie where after a successful campaign against a warlord he then got transferred to the 9th Legion where he served for around 2 more years where after he got selected for the Imperial Guard.

During his time in the legions, Azran was part of many missions and during one of those missions where they had to raid a warlords camp, the officer in charge got taken out of the fight early with an arrrow. Azran thinking fast took control over the unit and lead the men to victory.    Is one of the youngest to ever be selected for the Imperial Guard.

Have experienced quite a few embarrassments when it comes to talking to girls, specially those he find attractive.

Ever since he was little Azran have had a desire to join the legions of the empire and that way making a name for himself, later on when he had joined the Imperial Guard his priority became to serve and protect the royal family.

A fiercely loyal friend, and a man of good humour

When off duty Azran would either spend the time training, studing or spending his time walking around Pearlhal and getting to know people.

Still having the charisma of a boy from the province, Azran was well liked among the people around him. The only person who had the ability to make Azran speachless was Ira.

Generally speaks with a gentle voice.

Ira met Azran in the Kingsway Inn and when the bar fight broke out she came to sit at his table, he had a table that was not affected by the fight, they talked and she became interessted in Azran and every time after that she would try and find him every time she went to town.

Calls Azran for "dumb human" when he teases her.

Ira is extremely fond of Azran, she feels like he is one of if not the only one who treats her as a normal being and not the heir to the empire of Derica.

Coming from a small village blacksmith, Azran have never had much when it comes to money. It was only when he joined the legions that he began to have a decent income.
Alignment
Neutral good
Species
human
Age
24
Date of Birth
23/10/1261
Birthplace
Buan
Current Residence
Pearlhal
Biological Sex
male
Eyes
Green
Hair
black
Skin Tone
Tanned
Height
1.86m
Weight
95kg
Quotes & Catchphrases
Hello there   oh, here we go again
Aligned Organization
Empire of Dercia
Other Affiliations
Known Languages
understands common and elvish

I'd put a few more periods and tweak the grammar, maybe read some parts out loud to find where the rub lies, but it sets the mood and explains the character quite nicely.