The capital city of Freynia, Treyburgh, is a setting of many chilling stories. Stories of The Great Vampire Conspiracy are well known, commoners often arguing whichever noble or rich merchant has sold their soul to demons to become a vampire - but some stories are less fantastic and possibly even weirder. Such is also the tale of the Treyburgh Spinster.

Case of Treyburgh Spinster is one of the oddest criminal cases in Freynian history. Urban legend created by the events told about a spiteful older woman who would prey on people either from vanity or dismay. Once a person had crossed her, she would stalk them from the shadows and eventually kidnap them.

It was unknown what she would do to her victims. Some pondered she would kill them, and some speculated she would make them as slaves or maybe sell them away. Some even wondered if she ate them, or made them into magical potions to extend her youth, or used them to dark rituals. 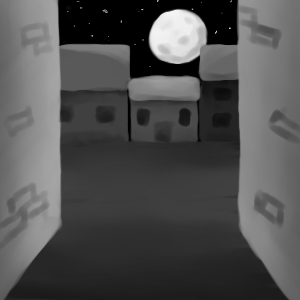 One sure thing was that the victims would never be seen again. The only thing anyone would ever receive telling about the victims' fate was a yarn made from victims' hair, that would appear on their doorstep some days after the disappearance.

Starting from year 3912, Treyburgh was plagued with the series of strange disappearances, with even stranger aftermath.

In the 4th night of Jun, miss Elena Dalais vanished from her backyard garden, while she had been reading a book in the patio before getting to bed. According to her maid, she had just told goodnight to her children and had told them to inform her when her husband would arrive. But at the time the maid would approach her, she was gone. According to the witnesses, her shoes were left behind, and there was a print of her barefoot on the soil of the flowerbed. The residence of the house nor neighbors had heard any sounds.

Elena would never be seen again, despite several attempts to search her. About a week after her disappearance, a servant of the house would find a bag on the front door. In the bag, there was a spool of thread spun from human hair, color matching Elena's own.

Elena was the first recorded victim by the person public would name as "Treyburgh Spinster." According to the historical sources, between the years 3912 to 3918, the Spinster had at least 14 reported victims, and possibly some unreported ones in lower classes. Most of the victims were women, and almost half of them were children. Victims came from several different social levels and ranged between ages 11 to 30. 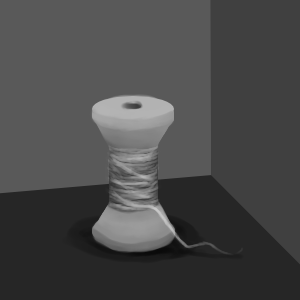 Spool of thread by Tiirikka

In 3914, a woman by the name of Annik Hollow was accused of being the Treyburgh Spinster and hanged for the crimes after the kidnapping of the 11-year-old Nesor Bonet. She worked as a housekeeper in the Bonet household and was widely disliked by several locals. As the disappearances would later continue, officials ended up in an awkward position to apologize and compensate miss Hollow's execution.

Despite several desperate attempts, Spinster was never caught, and the sudden disappearances would stay as a mystery. Guards were called, and several scholars and detectives were put into the case with no avail. In almost every case, the victim's shoes were found close to the spot of their removal, and on every case, spool of thread made of human hair would appear to their home or last place they stayed in. Few reports tell about low humming that could be heard moments before discovering the spool.

According to some sources, the Treyburgh Spinster was hypothesized to be a literal Hag, but no actual proof of this exists. Also, it was theorized that Spinster was more likely a man, as a woman might have more trouble to overwhelm their victims.

The possibility of these crimes to be made by a group of people working together was heavily considered and thought to be the most probable conclusion. This take, however, wasn't as "romantic" interpretation, so later tellings of the events often treat the cases as they were all made by just one person.

The incidents of the Treyburgh Spinster has also been speculated to be part of the plans of The Great Vampire Conspiracy. Others have suggested that some of the victims might have staged their disappearance to leave their lives behind.

Spinster has become something of an urban legend, and the tale is often used to warn children about strangers. Some have invented tests of courage to call for the Spinster's vengeful spirit. Such games are popular among teens, who are trying to show off their bravery. These often manifest with rhymes that are often read alone in a dark room, sometimes with the use of a mirror. Spindles are commonly used in these dares, and the participant wraps around one of their hairs around the spindle.

Despite this more light-hearted approach, the mystery of the Treyburgh Spinster has stayed as a horror tale in the public consciousness.

Story of the Spinster Has also gotten surprising retelling as a book called "The threads I weaved for you", where the Spinster is depicted as a woman in love with a crown prince, who instead of her keeps fancying on other women, often complimenting their hair. On this retelling, the Spinster is driven mad and drowns her victims, making thread from their hair to send others as a warning. Book had a very mixed reception but has its cult following.

The Spinter has also appeared several times on several other books, most famously in the detective story "Snerlon Molch, and the hair raising thread." She also had a role in "Prince Braveheart and the Common thread" as the dangerous femme fatale.

Recorded victims of the Treyburgh Spinster 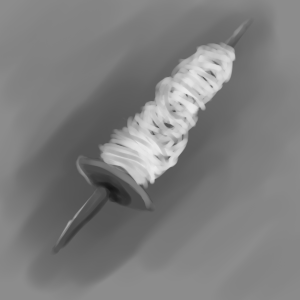 Spindle by Tiirikka
Myths and Legends

Melyria is a custom roleplay setting made to work with Dungeons & Dragons 5th Edition by Tiirikka and friends.
Melyria draws is inspiration from several Dungeons & Dragons settings and their lore, mainly from Forgotten Realms.
Dungeons & Dragons belong to Wizards of the Coast and I claim no ownership of it.
Melyria and it's quirks belong to me and getting inspired is very much allowed and credits appreciated!

This article was written as a part of a community challenge "The Cold Case". Visit the challenge page for more information!

Hi there! Awesome work on the article! Intense stuff and also quite tragic. You depict the story well, going into detail of conviction and execution of Annik Hollow, the lovely list on of victims, the focus on dates and years, it all adds up to a lovely entry. Great work my friend, and good luck. As a sidenote I'd recommend a solid glance at editing. There a few errors here and there, but nothing that really took away from my enjoyment. :)

Thank you, Dylon! x3 I will definitely make some editing rounds. <3 I'm glad you took the time to see my article!

You're quite welcome! It was a pleasure. Ill keep an eye out. I'm following now, sorry I forgot to like XD

Quite mysterious. The hair-thread and the "Bloody Mary" style teen games are an especially nice touch.