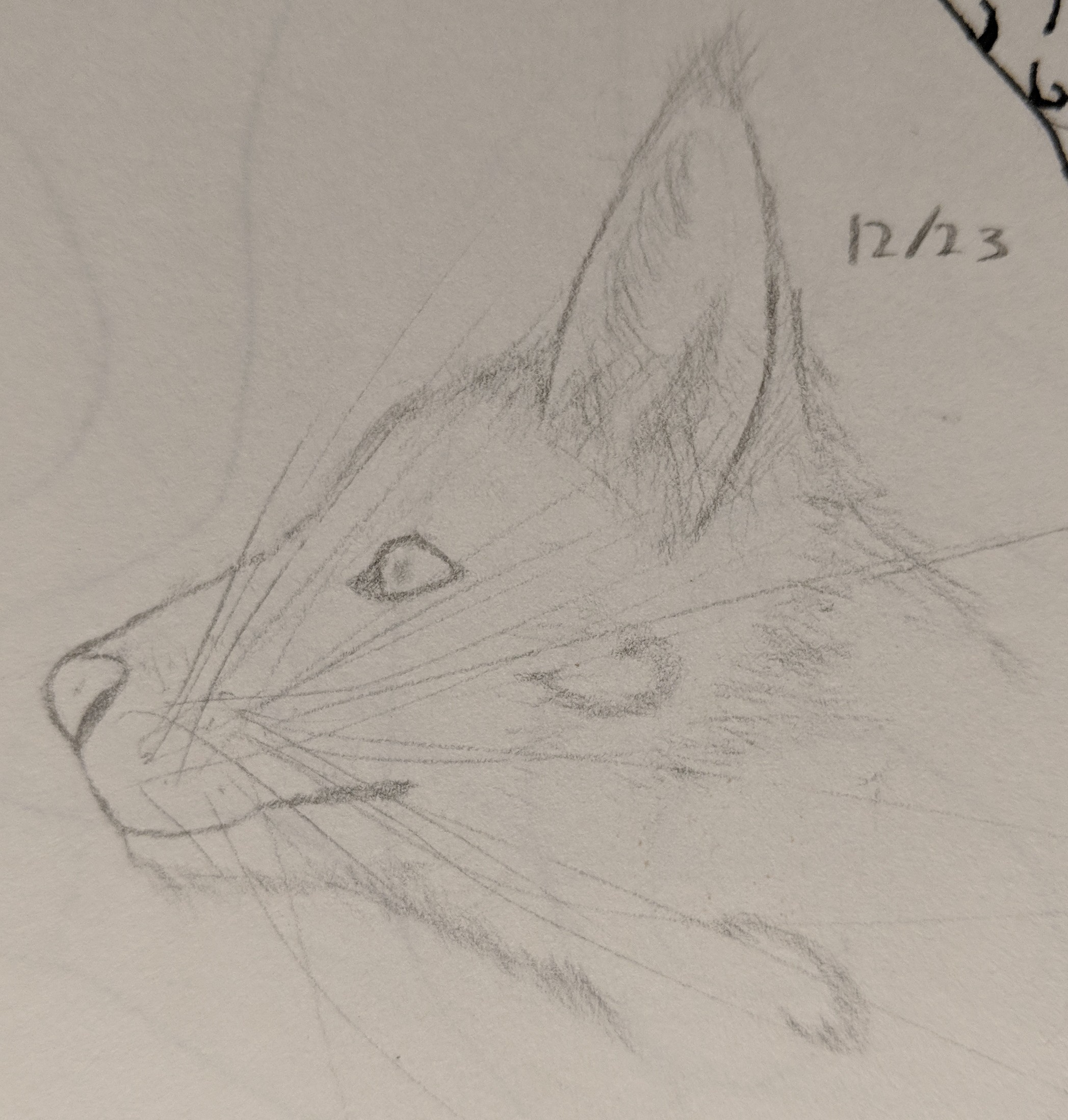 Fur
The most defining feature of a Vinsel is not their long-haired tails nor their thick whiskers nor their smoke covered paws, but their vibrantly colorful patterns of swirls hat dot their bodies. While their fur's base colors are shades of dark brown, the swirls which adorn their body are vibrant and of similar colors to their lineage. Emerald greens, sky blues, bright yellows, each family has their own shade, the shade of their offspring being similar to their father's. Vinsel are born without these patterns, their fur one solid color. It is only after their first year of life that they gain a single swirl, and one each year thereafter until they die. Where the swirls appear on their body seems to be random, and can appear anywhere on their body. No two Vinsel have the same pattern of swirls.
Vinsel's have a very thick but short coat, with the exception being their tails. In contrast with the rest of their body, the fur on their tails grows absurdly long, each hair being the same length as their body. It is quite the chore to keep the lengthy fur clean as it drags along behind them. Because the fur length has no gradient between the beginning and end of their tail, their tail gains the appearance of a cone or bell, having others affectionately calling them "bell butts".
Their tails are not the only things that are incongruously long on their bodies. Their whiskers, while not quite as long as their tails, are of considerable length and thickness. They use their long whiskers to pick up minute changes in the air around them, sensing movement of a small mouse near ten minutes of walking away. When not trying to sense their surroundings, they fold their whiskers to be flush with their body.
Body
At a glance, one might be confused on whether they are a canine or feline, having attributes of both in their facial structure and body structure. They also have ears more similar to a foxes with small tufts of fur atop them. Their sense of smell and hearing are satisfactory, relying more on their whiskers as their primary sensory. Their teeth, while good at ripping apart prey, are not the strongest nor longest.
Their paws, on the other hand, are another unique oddity of the Vinsel. They have special glands at the base of their ankles that expel a gaseous substance at will. This gas then encapsulates their paws, obscuring them from view. The gas quickly vanishes when it strays too far from their paw, looking like puffy gloves. They are able to congeal and harden the gas surround their paws into whatever shape they wish. This allows them to grab and hold things, create claws many time stronger and sharper than their small and thin claws, and even create blocks that they can then jump off of to jump around in the air. As the gas is very dark, an outsider is unable to see object the Vinsel creates.

Vinsel are carnivores, eating both small critters that scamper across the forest floor as well as larger herbivores that feast on bushes and tall grass. They use their whiskers to detect changes in the air to find prey. When hunting small prey, they are solitary ambush predators; when hunting larger prey, they are hunt in packs as pursuit predators. They are not the most efficient in either, getting to antsy to wait for long periods of time or slowly come up on the prey, and ill equipped to hunt anything their size or larger.
One of their primary hunting methods for both sizes of creatures is to take to the air. To do this they congeal pads of their expelled gas below their paws and hop off of them. The congealed gas quickly sublimates and dissipates after it leaves the range of the paw. They do this to hop quietly through the air. After they are in the air, the dive on their prey, them not suspecting a creature their shape to come from above. This is especially useful in the season of floods, when the forest floor is flooded and they would be very loud sloshing through the seasonal marsh.
Ambush
To catch small prey such as rodents, they first find them with their whiskers, a distance further than they would be detected. After they come close enough where the small creature would detect them, they either take to the air or wait patiently for the creature to come close to them. In the latter case, they often get too antsy and try to pounce before the creature is very close and the potential meal gets away. In the former case, the are often heard before they are able to fall upon their prey (though they are less likely to be heard than if they stayed on the ground). Because of their lackluster skills when hunting smaller prey, they usually can't hunt well enough to properly feed themselves. They only catch enough to keep themselves fed between greater hunts.
Pursuit
Vinsel subsidize their inability to catch enough small creatures by hunting herbivores many times larger than themselves. Their bodies are not naturally equipped to handle larger beasts and must both work with others and implement tactics when hunting. To take down larger beasts, they have to get inventive, falling from the sky and having them bleed out by many small cuts is usually not enough. One of the more popular methods is to first single out a solitary beast if they're in a group, pressure them in a specific direction to a predetermined location, and use traps to incapacitate or kill them. These traps can be as simple as covering a cliff face with a brush so the cornered creature doesn't see it coming, or as complex as a series of strung together ropes to trip and ensnare the prey.

Vinsel form packs for protection and hunting. Each pack has one alpha that is the most fit and dominating of the group, which can either be a female or a male. While they are not hunting, every other in the pack, excluding the alpha, has equivalent social standing. But during a hunt, when a select few branch off of the larger pack, they have an unspoken power structure. To them and anyone watching, the order of who is most important is evident, the most important giving orders while the others follow and the least important providing support. Each hunting expedition seems to have different pecking order, one member who might lead the hunt one day might be bottom of the chain the next. They themselves say there is no rhyme or reason for who is picked, it's something they instinctively know only when they set off to hunt.
Packs can consist of any amount of Vinsel, entire cities being considered their pack by those who live there. Because they can have such great numbers in their packs, they often have several squads to hunt either sequentially or all at once, depending on the abundance of prey within their territory.
A Vinsel's litter does not bare as many males as they do with females. Due to this, it is often the females who must either share or compete for mates. Sharing is more common, but if their selection of males aren't so fecund, they might fight over breeding rights. Males are all around smaller than females, being, at max, only three quarters the size of a female. Though males hold as much social status in normal day to day affairs, females collectively "own" the males when it comes to breeding, commanding them to do as they please. Males do have some say with who they decide to breed with first, often choosing a female with more vibrant swirls.
When a Vinsel female has a litter, usually four to six pups, she keeps her distance from the pack. She stays in loose contact, teaching her pups without outside interference. She is still cared for by the pack, them bringing her choice meats for her and her pups while she expends all her energy protecting, teaching, and nurturing her pups. Pups are typically born at the end of the season of floods, dependent on their mother's milk for half of the overgrowth season (about a third the year). When her pups are able to hunt, she teaches them ambush tactics first. She takes one pup out to hunt for a short time before returning to her den and bringing the next pup out for training. Once the pups are big enough, she takes them out for them to learn to work together to take down larger prey.

Vinsel originally inhabited the overgrown forests of northern Hasehak. They lived in areas with thick overgrowth, areas that had two predominant seasons, the overgrowth and the flood. They make their homes on top of mounds and small hills to avoid having their homes destroyed by the yearly floods (the floods creating a layer of water all across the forest floor). Originally they would seek out these mounds with adequate amount of foliage to conceal them, but now they grow it themselves after learning about agriculture.
They fashion their homes from densely packed grass, bushes, and ferns, using it to hide themselves from would be predators (no longer much of a concern). Originally they would just hide within the grass or bushes, but now they craft how they grow and have furniture and other necessities of modern living. Common homes consist of the thickest of thickets of Leiprod tied together at their tips, and the centers hollowed out.
To keep their homes from being eaten or infested by bugs and insects, they use their bushy tails to coat their homes in their saliva which acts as an insecticide. And any herbivorous creature that assume their lush homes would make a great snack, they quickly kill and eat the invader before they even get a bite.

Bathing: As they use their whiskers to feel the wind, if they get them wet it makes it much harder to perceive the world. So to keep clean they use their tongues to remove dirt, licking themselves and each other. Their saliva is both slightly viscous and venomous. The venom is not made by them but by the bacteria in their mouths. It is harmless for any decently sized creature, but for small insects it's deadly. The venom repels parasites for them but also help the plants they use to make their homes. Their saliva dries quickly in the open air (leaving their fur in a nice sheen), but takes longer to dry under the long thick fur of their tails. This excess saliva within the fur of their tails rubs against the plants of their home, coating them in an insecticide. They spend hours grooming themselves and others of their packs, taking a long time to clean their tails.

Vinsel are able to articulate words about as well as a Drake, though they pronounce similar sounds differently due to their fatter tongs (Ex L's as R's and hisses as growls).

Their major Reln is Mur.

Very detailed, it makes for an interesting animal. I think the first sentence ends up being a bit odd.   Great layout! Especially with the typeset.

Thank you so much! I reworked the first sentence to hopefuly be easier to read per your suggestion.