Blazonry is an addition to clothing one only finds among HavocBreakers, thought mostly the pirate variety. It usually takes the form of a small decoration, suck as a lapel pin or cap adornment, though full trim at the top of a garment is not unheard of.   The outstanding thing about Blazonry, at least among normal folk, is that it is made from the fur, hair, feathers, or scales of other vie.
Among those outside of pirate culture blazonry is seen as horrific, or at the very least distasteful. Seen as some sort of grizly and twisted boast about a slain enemy, or a reflection of how little they value the lives of others.   In reality though, Blazonry is a way of showing affection for someone important to you. It's seen as carrying a part of them with you at all times.

Blazonry materials are often gathered from shed, then specially treated and coated to make them last longer. Most opt for smaller knickknacks, like pins or a bit of flare in a cap, due to the process of hand stitching loose shed into the trim of clothing is time consuming and tedious.
Chiuov have no shed, so it's a running joke among pirates that no one loves them.

Some wear thier blazonry only on very important occasions, such as days honoring the one they're made from, or when trying to show off who they are connected with.   Some wear it as often as possible, due to an overwhelming sense of respect or love for the person they're made from. Or just becasue they like how it looks.   Both forms are acceptable, but the more you wear a particular peice of blazonry the more upkeep and matanince you have to put into keeping it preserved. 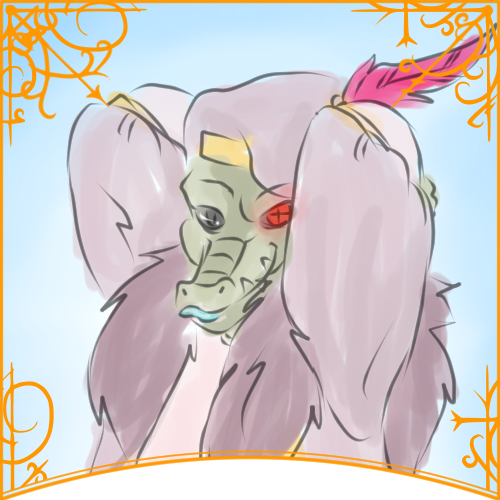 Ora by Lengna
A pirate with both forms(pin and trim) of Blazonry
Item type
Clothing / Accessory
Related ethnicities
Rarity
More common among those from in Vullavual Laud, specifically The Pile.
Raw materials & Components
The shed (fur, hair, feathers, or scales) of a loved one.
Clothing and Fashion
In response to the prompt Write about a clothing item worn by an organization with bad reputation. What's its purpose and what does it represent?
Setting | Characters | Story
Click here to see more form the Kriocesocr System!
Or you can peep other tangentaly connected worlds in the Misc World Index!
Consider supporting Lengna on Ko-fi.
Cover image: Setting Cover by Lengna(Paper)