Temple of the Divines

Speakers of the Six-Fold Truth

The Temple of the Divines is a major religion originating from the region now known as the Kingdom of Brisland. The reach of the Temple has spread since its humble origins almost fifteen hundred years ago. While Brisland remains the heart of the religion, it has a strong presence in both the Principality of Remaria and in Teugoras. There is also a substantial foothold in the eastern portion of the Marsden Empire, Argastilan, and Ghalt. While attempts at reforms among the tribal peoples of the Farasti Plains and the Vostian Confederation have been made, they have yet to bear fruit. There are also branches of the Temple establishing footholds in the western realms, most notably in the heart of the Marsden Empire.   The main tenant of the faith of the Temple of the Divines is the worship of six celestial figures believed to have created the world and to now lord over it as shepherds of humanity. The officials of the Temple, called Speakers, claim to speak for the Divines themselves. While some more liberal - or humble - speakers may say that they simple interpret the will of the divines; other more ambitious among their order claim to literally converse with these higher powers, and that they are the instrument of the Divines' wills upon the mortal world. 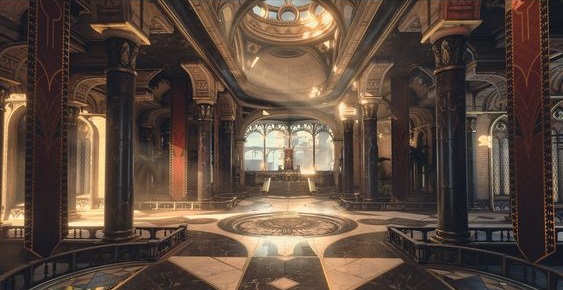 The Temple is lead by Grand Speaker Mathias Justinian from the Grand Temple of the Six Pointed Star in Brisburgh, in the Kingdom of Brisland. Most major cities within the realm have an Arch Speaker who oversees the Temples within the city and those of the surrounding lands. In all, there are over two dozen Arch Speakers. Whenever the current Grand Speaker either steps down or passes on, a new Grand Speaker is chosen from among the Arch Speakers.   In smaller settlements, there may be only one temple present, but a number of Speakers. When this is the case, they are lead by a Speaker Dominus appointed by the local Arch Speaker. Many missions sent abroad are lead by a Speaker Dominus as well, usually appointed at the time he or she is given charge of the mission. Almost every settlement in Brisland, Remaria, and Teugoras - even small villages - will have a Speaker and a small temple. While the temples in larger towns and cities are often massive stone edifices which are richly appointed monuments of opulence, those in small villages may be a humble wood building which also serves as the domicile of the local Speaker.

The main goal of the Temple of the Divines is to be the instrument of the Divines in the realms of man, guiding humanity towards a better future according to Their will. The leaders of the Temple strive to spread their Six-Fold Truth to all distant lands, educating all people in the way of the Six-Fold Path.

The Temple of the Divines has become an economic and military powerhouse to rival even many Kingdoms, even without holding any land themselves other than the ground their Temples stand upon, the lands of their foreign missions, and some small parcels surrounding the monasteries of the orders-militant.   Tithes are collected from the people, which might range from a gift of a piece of fruit to sizable donations of coin depending upon the source. All are encouraged to give what they can without causing themselves hardship, but hoarding wealth that could be used to further the will of the Divines is discouraged. Many successful merchants and pious nobles almost bankrupt themselves in their generosity to the faith, some even believing they can buy the favor of the Divines themselves with their tithes. This belief, naturally, is encouraged by the Arch Speakers and the Grand Speaker himself.   In spreading across the lands, the Temple found long ago the need to protect itself. Newly built temples in foreign lands were often seen as offensive to the native folk and attacked. Pilgrims on roads in far-off lands were robbed and murdered. During times of war, the heart of the faith itself could be subject to offense from the sword of another nation. In the spirit of defending their assets and the spread of the Six-Fold Truth, the Temple formed a number of military groups called the Orders-Militant. These groups, often formed around a core of knighted warriors who have devoted themselves to the faith, often live separate from the rest of society in secluded monasteries. These monasteries, in fact, often resemble military fortresses more than refuges for the faithful.

According to the oldest texts of the Temple, there was a man in a small fishing village along the southern coast named Kallen. (Some believe that this village would eventually grow to the town of Rawlsey, though none can corroborate the story with confidence.) While Kallen was out fishing in the early morning, he saw a shooting star streak across the sky towards the west. He spoke of the star to the other villagers, but none but him had seen it. He felt this was a sign, and set out to find out where the star had landed.   With naught but a few fish, the shirt on his back, and a pair of worn sandals; Kallen set out on his pilgrimage. He crossed the fields near his home, trekked through the swamps at the delta of the Silver River, and made his way through leagues of forest before coming to the base of the Cragoran mountains - farther than any from his village had ever traveled. By the time he reached the mountains he had not eaten for a month, nor drank of fresh water for a week. His sandals had long since fallen apart and his feet were raw and bloodied from the barefoot march.   Upon the entire pilgrimage, Kallen did not see another person. This was until he reached the foot of the Cragoran Mountains. There he was met by a man in tattered robes who said nothing - even when Kallen spoke to him - but gave the pilgrim food and water. The robed figure also tended to the tattered flesh of Kallen's feet. After filling his belly, Kallen is said to have slept for six days.   Upon awakening, he asked the robed man once more if he had seen the shooting star. This time the man answered him, and told him that it landed at the top of the tallest mountain in the Cragorans. He said that he was a herald of the gods - who at the time were mysterious figures feared by all - and that Kallen was chosen by them to become their new herald. First, though, he had to climb to the top of the mountain and pass six tests along the way.   The specific trials Kallen faced are not written about, and it is said that each herald must face their own personal challenges. To this day, pilgrims travel to the Cragoran mountains to climb the highest peak in hope that they too might face the challenges of the Divines. What is known of the nature of the challenges faced by Kallen is that they are challenges of strength, humility, love, honor, wisdom, and death. The last of these is argued by many even to this day, but some say that Kallen was required to die and be reborn to become the Herald of the Divines.   After passing these tests, he returned to the base of the mountain and found many people waiting for him. He told them of his pilgrimage, and that he had spoken to the gods. He told them that there were six Divines, and that they had told him their Truth - the Six-Fold Truth - and told him to invite others to walk the Six-Fold Path. He founded the first temple there, and around it grew a town that became a small city. That city is known, to this day, as Kallenston.

The Temple of the Divines originated in the lands currently known as the Kingdom of Brisland nearly fifteen hundred years ago in the town of Kallenston, named after the man who founded the religion - Kallen. After seeing a star shooting across the heavens, he made a pilgrimage across the land until he reached the Cragoran Mountains. There it is said he undertook six challenges before being granted the right to speak for the Divines.   Since its founding, the faith has spread across the region. It was first organized around the river basin running from the Cragoran Mountains south to the fledgling town of Riverton. It quickly spread to Brisburgh, and the shared faith had a hand to play in forming the close relation between the two city-states that eventually lead to the Riverton Alliance, and later the Kingdom of Brisland.

The belief of those that follow the Temple of the Six-Pointed Star is that all of creation was formed by the six Divines, working together to bring life to lifelessness. Before this, there was nothing but their own celestial palace floating in an endless void. After shaping the world, they created humanity to be the caretakers of the world. They then left to return to their celestial realm, guiding humanity from afar through the voice of their Heralds.

Articles under Temple of the Divines