Order of the Burning Lance

The Order of the Burning Lance is one of several militant groups serving the faith of the Temple of the Divines. These Orders-Militant all evolved to help protect the people of the land surrounding Kallenston, the heart of the faith and destination for pilgrims from all over the region. The Burning Lance was formed later in the history of the Temple, during the fourth century I.R. With an increasing number of outside threats encroaching on the region, a large number of pious warriors felt it was their duty to not only push these invaders back, but to chase them to the ends of the realms if need be. Banding together, they rode out to hunt down the mountain tribes, the hill tribes, and even to raid into neighboring lands such as the Malavian Confederacy - as it was called during that time.   Over the next several hundred years, the Order of the Burning Lance swelled in numbers. Pillaging as they invaded foreign lands, they quickly became one of the wealthiest single military forces in the eastern realms. This wealth enabled them to equip their men with the best possible arms and armor, pay new recruits handsome salaries, and ensure that the entire army was well fed and supplied. Allying with states that were viewed as potential converts, the Order continued to have success after success on the battlefield. Grateful city-states and fledgling kingdoms paid generous tithes in exchange for the aid of the Burning Lance, and thus their coffers stayed full. Seeing how well the brotherhood treated its own, converts flocked to join them. The ranks swelled with fresh faces, many of different cultures who prayed to different gods. While the core of the order remained faithful to serving the Temple and devoted to Savas, most of the brotherhood was made up of foreigners and nonbelievers by 550 I.R.

While the face of the Order of the Burning Lance is that of a pious fraternity on an eternal crusade to purify the lands of the unbelievers, the Order long ago became little more than a mercenary organization. The Order accepts alliances with any faction no matter their faith or intent to convert bases solely upon the coin involved in the transaction. While they do negotiate terms of public acceptance of the Temple of the Divines - often including permissions for Speakers to establish missions in these foreign lands - these are often secondary considerations to the payment rendered for the services of the Order. 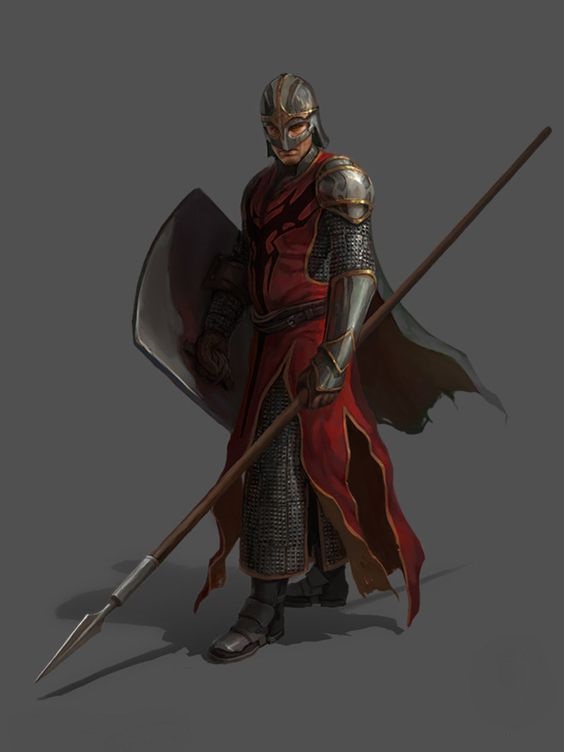 While the origins of the Order of the Burning Lance are shrouded in the mists of time, it is known that armed bands of pilgrims - many of them experienced warriors - were raiding the mountain tribes near Kallenston as early as a thousand years ago. The Temple of the Divines formerly recognized the order, which had already grown into a sizable army, during the Fisher's War in 331 I.R. This brotherhood of pious warriors, ordained by the Temple and funded by the lords of Riverton and Brisland, marched to battle against the invading forces of Estwich and Malavas. 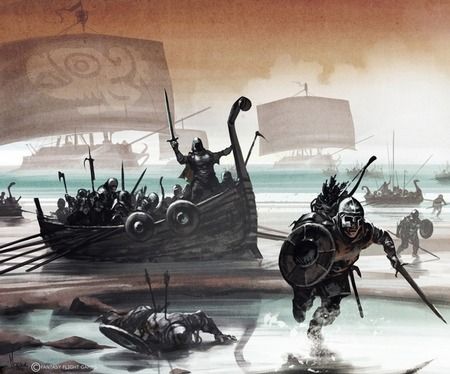 Later, after the Riverton Raids of 337 I.R., the Burning Lance pushed raiding forces all the way back to Estwich and were responsible for the razing of several villages near the town. The Order was about to march on the town of Estwich itself until they were paid a generous tithe by the king of Malavas in exchange for turning away. After this they shifted their attentions to the forest tribes to the north, further garnering support from Malavas and Estiwich, collecting more tithes, and cementing a positive relationship with the powers that would soon form the Malavian Confederacy - and later the Principality of Remaria.   Campaigns similar to this continued for the next few hundred years, and as the ranks of the Order grew, so too did their reach. They were instrumental in several battles during the Greenfields War, including the siege of Halsingly. After this, the Flaming Lance operated in the wilds to the east; once more hunting down and scattering tribes that threatened the borders of what was considered civilized lands. They even had a hand to play in the wars that led to the eventual unification of Teugoras under a single king in 678 I.R. By this time, the Order of the Burning Lance had already spread to the western realms. They had cemented a relationship with The Mardhelm Empire in 578 I.R. by fighting to clear the Gheltish Pass, and from there forces of the Order had spread to the southern reaches. Currently, there are few regions in all the realms have not been exposed to the fury of the Burning Lance.

By flame and lance we purify the unbeliever.

Callum Ulthredson is the Grandmaster of the Order of the Burning Lance.


Callum stood shoulder to shoulder with his brethren, their crimson surcoats swirling in the desert wind. He thrust forward with his spear, impaling one of the heretical Yemites. He swung out with his shield, the edge of it caving in the man's helmet, and pushed the already limp body from the shaft of his weapon. Nearby were similar scenes of carnage. The smell of blood and urine filled his nostrils. The screams of the dead and dying filled his ears. The Yemite line buckled, and soon the bronze-skinned foreigners were on the run. A crimson wave erupted around him as the brothers of the Burning Lance surged forward, not yet content with the blood spilled this day, and Callum joined them in their charge.


Remove these ads. Join the Worldbuilders Guild
Order of the Golden Stag
Orders-Militant