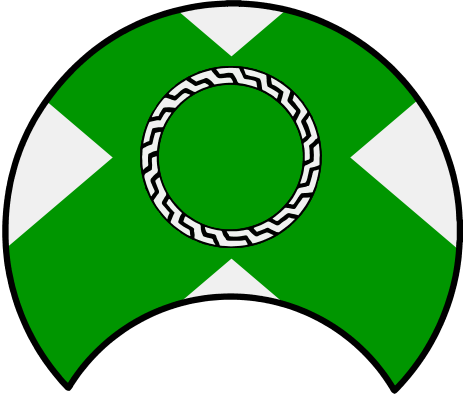 Minas Amer is a fortress-library on the shore of Lake Encarthan, south of the port city of Greengold. Perched high atop a cliff, it overlooks the lake and has stood for thousands of years. It is home to elven monks and high ranking clerics of Nethys. It also often houses visiting representatives from other knowledge-based churches as well. Contained within its many chambers is the sum knowledge of all life across Golarion; events from the mundane to the extraordinary are included for the sake of completion. It is said that at least one copy of every work ever written is secured inside so that it may be preserved for all eternity.

The outermost buildings include private dormitories for the monks and public quarters for visitors, as well as amenities one would expect to find in a self-sufficient settlement (bathhouses, clothiers, granaries, gardens, and so forth). Minas Amer even has a pub called The Enchanted Falcon.

The pyramid is the central structure in which Minas Amer is built around. The Great Archive and various rooms of study are contained within. The Pyramid, and the keep as a whole, are protected by magical wards as well as the Draa'kyl and numerous archmages who reside in Minas Amer.

The Council of Knowledge

The inhabitants of Minas Amer consisted mostly of elves who have devoted themselves to the gathering of knowledge to add to the Great Archive. Acolytes were a group of non-denominational, cloistered monks who tended to and protected the great library-fortress. They came from all walks of life; from clerics of the deities who personified the search for knowledge to wizards and even some warrior-monks. These monks, the Draa'kyl, were united in their scholarly pursuits and their duty to preserve the collected knowledge and lore of Golarion, in all its forms. These were elves who would often brave the world beyond the walls to gather rare books and knowledge to bring back to the Great Archive.   However, not all inhabitants were elves. Humans were also permitted within the walls of Minas Amer. They maintained shops and businesses, tended crops and gardens alongside the elves. For the elves, this was part of their goodwill and a way of burying the hostile past between the elves and humans. The elves of Kyonin frowned on this, but the people of Minas Amer worked together in harmony nonetheless.

Minas Amer is a tall pyramid surrounded by walls and smaller buildings. The pyramid itself appeared to have been damaged at some point; a large crack stretched from the base up the entire eastern face almost to the top. The crack has been repaired, but the scar remains visible.

The pyramid structure itself was created two hundred years before Earthfall. It was originally one of the temples of the Sa'har Order that survived Earthfall. However, during the Age of Darkness the temple was attacked and damaged. Who - or what - attacked the temple was unclear. But whatever caused the damage was driven back at the cost of the remaining sa'har knights.   Elven troops rediscovered the temple once the sun had returned to the sky. A returning band of sa'har knights, along with scholars and archmages, restored the temple and were surprised by the surviving libraries that remained intact. The temple became a sanctuary of knowledge, dedicating itself to the preservation of all knowledge across Golarion.
Type
Keep
Parent Location
Kyonin
Characters in Location
Related Report (Secondary Locations)