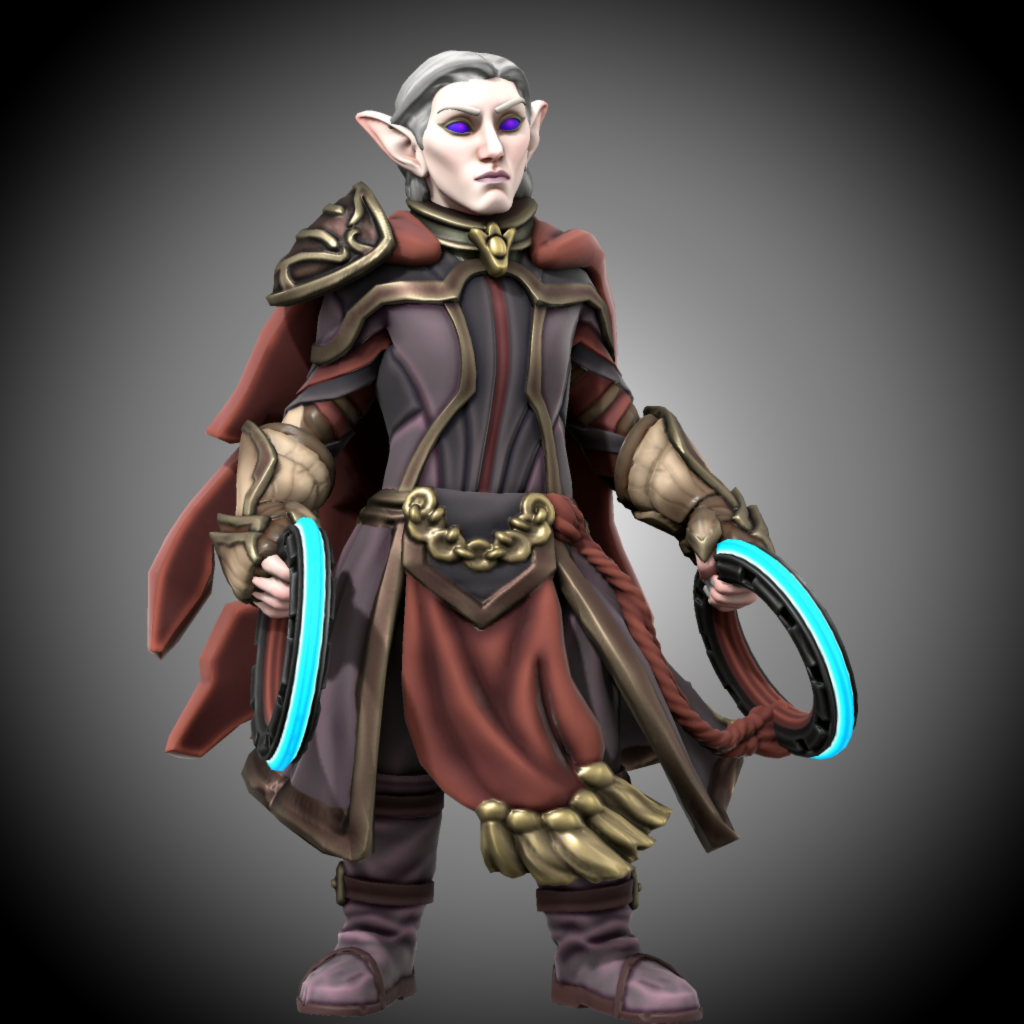 A former Sa'har Master and High Consular, Khaylin was one of the elves who stayed behind during Earthfall. He led an army of elves deep below ground to seek refuge in the Umbral Temple, a temple devoted to the Sa'har Order. With Ardura Tor'lyn by his side, Khaylin fought to keep the elves alive. But between Earthfall, Rovagug, and an onslaught of Demon Lords forcing their influence, Khaylin succumbed to the darkness and became one of the drow. He further slid into the void as the whispers of Zalatas corrupted both him and Ardura.   But that would not last.

The scene opened deep in the Darklands. A temple, its stones carved from polished obsidian, reached high into the blackness. A lone figure stepped through the doorway wearing a hooded, ash-grey robe. He crossed the threshold and lowered his hood. The drow Khaylin Cirdanas looked around the huge expanse before him, taking note of the various new changes in the structure and even the iconography that lined the walls. Statues, murals, all devoted to the celestial dragon Zalatas.   Khaylin entered the room. A woman looked out the window, the light from the lake of molten stone casting her silhouette into the room. Her back remained to him as she spoke. “You return, husband,” said Ardura. “I can’t say I approve of your choice of wardrobe. I thought you had burned all your old robes.”   “It helps me to focus,” Khaylin told her. “It helps with my meditation.”   “Your meditation took you far from the temple,” she said. “You have been gone for many days.”   “With all the work being done to the temple, I felt it best to step away and find serenity in the darkness. I see that the work has been completed.”   “It has. The Umbral Temple has now become the umbral gateway. Soon we will find the seals, open the gateway, and release Zalatas from his prison.”   Khaylin noticed the bow resting against the wall near the window. It was a lethal blend of wood, steel, and arcane - Deathwhisper. “I see you brought your bow to the temple,” he said. “Were you using the lava whelps for target practice?”   “Like your robes, Deathwhisper helps me focus." She paused. "Zalatas spoke to me.”   Over the past few years, Khaylin had learned to keep his focus strong when he was around Ardura. It kept her from reading his thoughts if she wished to do so. That focus remained in place as his hand moved ever so slightly toward the discblade, the chakram, that hung off his hip. “It has been a long time since he has spoken to you,” he said.   “But not you, apparently. He told me he offered to make you her scion." Another paused, filled with bitterness. "You.”   Khaylin watched her. “He has the might of a dragon, Ardura. Dragons are attracted to power.”   “You’re saying you are more powerful than me?”   “Perhaps he thought so. Who can know the thoughts of a creature claiming to be a space dragon locked away in the abyss for millennia.”   There was something in her shoulders that Khaylin noticed. A tension. Perhaps he struck a nerve when he used the word "claimed" when speaking of Zalatas. She continued. “He said you refused.”   “I did.”   “He asked too much of you…”   Despite the lava flowing outside the window, the air in the room felt colder. “He did,” Khaylin said.   “Great power often comes with great sacrifice. It takes a great deal of strength to make that choice.”   Ardura didn’t move. Her back remained to him, but Khaylin could feel something around them move. The air itself seems to take on weight, pressing against him. “Can you feel it?” she said. “This is what you gave up.”   “But what did you give up?”   Ardura turned around. Khaylin didn’t see her face in the shadows, how it was cold and devoid of emotion. He didn’t see her hands, fingers splayed, seeming to control the very reality that surrounded him. Even in the shadow, the darkness, it was what Khaylin didn’t see that froze him in place. The child that Ardura had been carrying inside her just days before, was gone. Her stomach was flat and smooth as if there had never been a living being inside her. “If it’s any consolation,” Ardura said. “She didn’t feel a thing.”   His words could barely leave his throat. “She…”   “Congratulations,” Ardura said. “It was a girl.”   Khaylin’s focus dropped. Any walls he may have been holding up fell away. Horror and rage crashed through him. His arm was a blur as the outer edge of the chakram ignited in a thin edge of green fire. It took flight like an emerald meteor heading straight at Ardura’s neck. It stopped in mid-air, but Khaylin felt the flow rushing through him, through the air between him and the chakram, inching the blade forward.   Ardura did not seem concerned. “I remember when you tried to teach me about the akasha, how it was all around us. One of the first lessons was to use it to feel what was around you, even things you could not see. How soon we forget.”   Khaylin never heard the recital of the arcane words behind him. By the time the world started to blur around him, it was too late. He felt himself being pulled backward, saw him being pulled out of his own body. Whisps of smoke filled his vision, then blackness.   Urthadar lowered his staff as the blue focusing gem at the end of it stopped glowing. He held up a white crystal the size of a fist. Something dark swirled angrily inside of it. “He will have to be restrained,” he said. “This won’t hold him forever.”   “It will by the time I am done with it.” Ardura picked up the chakram that had fallen to the floor. “I’ll put it somewhere safe.”   Urthadar looked at the body of Khaylin. It had fallen but hovered in the air. “Fascinating,” he said. “What are you planning to do with this?”   “Toss it in the lava I suppose,” she said.   “I think the akasha is still flowing into the body. I could use it to make this into a formidable weapon for you.”   “Interesting. Very well. Take it and make my weapon. But I warn you, Urthadar. If you fail me, your fate will be far worse than that of my husband.” 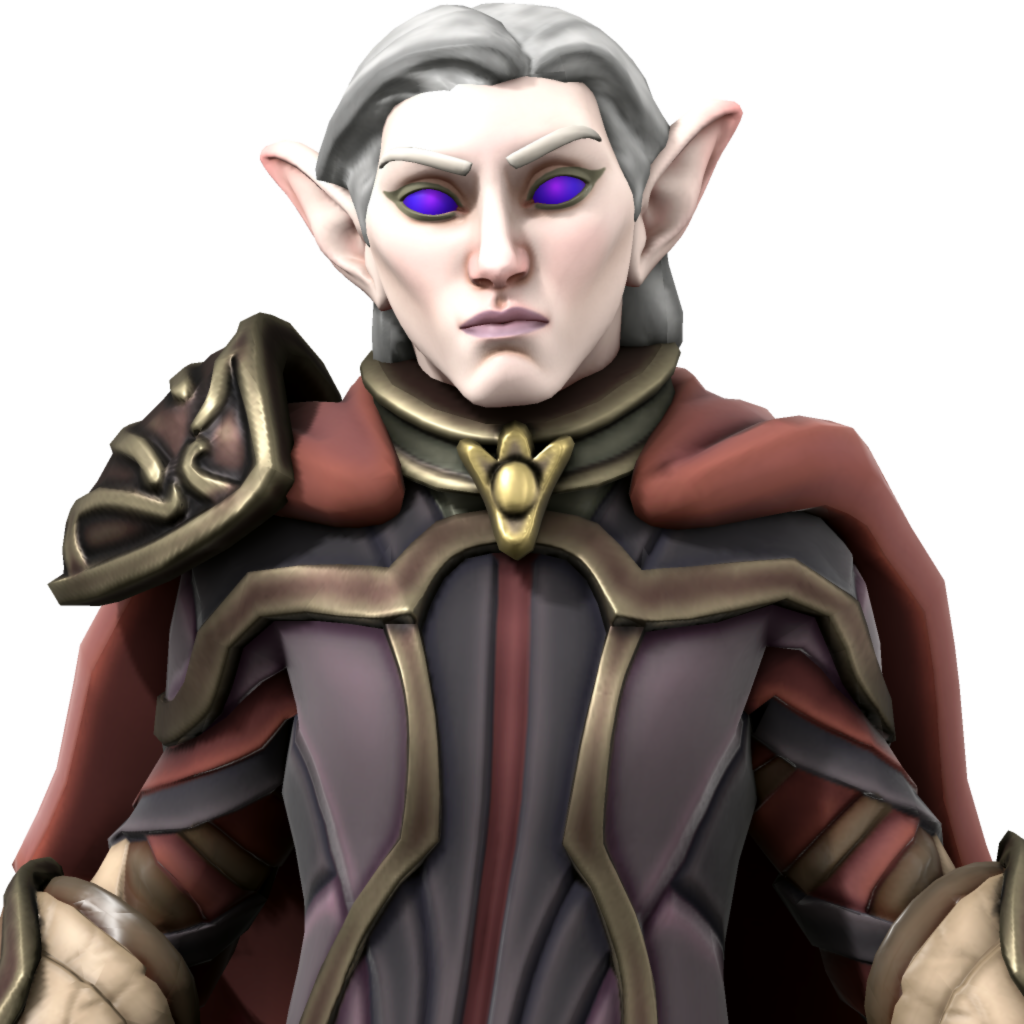