Before the Fourth Reckoning, the Valaran Empire ruled the entire southeast peninsula of Cuyania and the southern coasts of Kaabara. They controlled the majority of trade moving from Kaabara to Cuyania and frequently traded with the Kingdom of Tanish. After the Reckoning, the empire fractured. Today, the empire has dissolved into a collection of city states.   The Valaran Empire at its territorial peak: 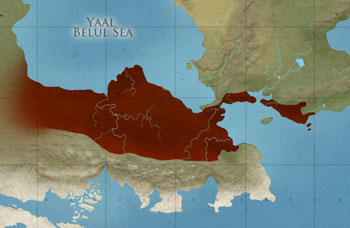 Valar was especially known for its contributions to science and technological development.

The empire was ruled by the Imperial Rector, who was the rector of the Valara Academy and lord of the city-state that surrounded it.

Beneath him was the Academic Council, made up of the rectors of all the great academies within the empire. They had some influence in the direction of the empire, but the imperial rector had the final say. Upon his death, his successor was voted on from among the council, based on one's academic contributions.

This feud was only the beginning. Once the rector of Valara had a taste of conquering, he didn't want to stop. The pockets of Valara's administrators practically doubled now that they also collected tuition fees from Istru Academy, and their eyes began to turn to the regions other centres of learning.

Over the next two centuries, Valara gradually expanded, taking over all the academies in the region. The small villages between the academy cities were swallowed up in the process, creating an expansive empire. When all the Rall people were part of the empire, the imperial rector at the time was still not satisfied and continued expansion into Kaabara. Though there were no academies in this part of the world, they profited off them as any empire would.

The empire became the superpower of the Fourth Age. Any scholarly-minded person travelled there to study, and they grew wealthy off their vassal states. They likely could have continued longer, if not for the Fourth Reckoning.

The Valaran Empire was badly damaged by earthquakes, floods, and wildfires. Trade routes broke down, impoverished vassals could not supply taxes, and the rise of leviathans in the ocean made long-distance trade highly dangerous and more expensive than other. Pieces of the empire broke off, and they lacked the resources to corall them back into line. Finally, the rector of Istru Academy declared themselves independent, and the imperial rector lacked the troops and funds to force them into obedience. Not long after, the rest of the large cities in Rall territory did the same, and the empire was no more.
Capital
Valara Academy
Type
Geopolitical, Empire
Alternative Names
Valara
Demonym
Valaran
Subsidiary Organizations
Related Ethnicities
The Fourth Age