The Northland's beauty and wonder inspire endless songs and poems. Still, beneath the glittering frost, savage lands of brutality and hazards await. Only those strong enough to follow the Primal Deities and struggle for the sake of wealth and honor can hope to withstand the harsh winter. A life of idleness means an early grave in the Northlands.


The Northlands continent is comprised of five landmasses in the Frigid North, northwest of the Tonarian continent. The land has many small towns hidden in vast wildernesses where northlander’s carve a life in the unyielding landscape. Many northlander’s farm, hunt and scavenge, while others choose to raid, taking what they need from their brethren to survive.   The harsh environment results in an arduous journey across the terrain, but the hearty people who call it home have adapted and thrived. With a multitude of mountain peaks and valleys and so few willing to endure the frozen winter, possession of land is mainly a matter of who is stubborn enough to claim it. Over time, many Jarls and their clans have risen, fallen, and risen again.   At times the Northlands boasts many Jarls, but rarely do the Jarls last longer than a few generations. Kingship is not regarded as sacred, and the power of Jarlhood attracts plenty of rivals and invaders. Only a Jarl who ascends to Warlord in the largest city of the north, Sleet’s Landing, may ever hold enough power to unite the clans and form a Kingdom. This generally happens only by the backing of a Primal Deity or from unfathomable amounts of fame that none would dare try to take the throne. 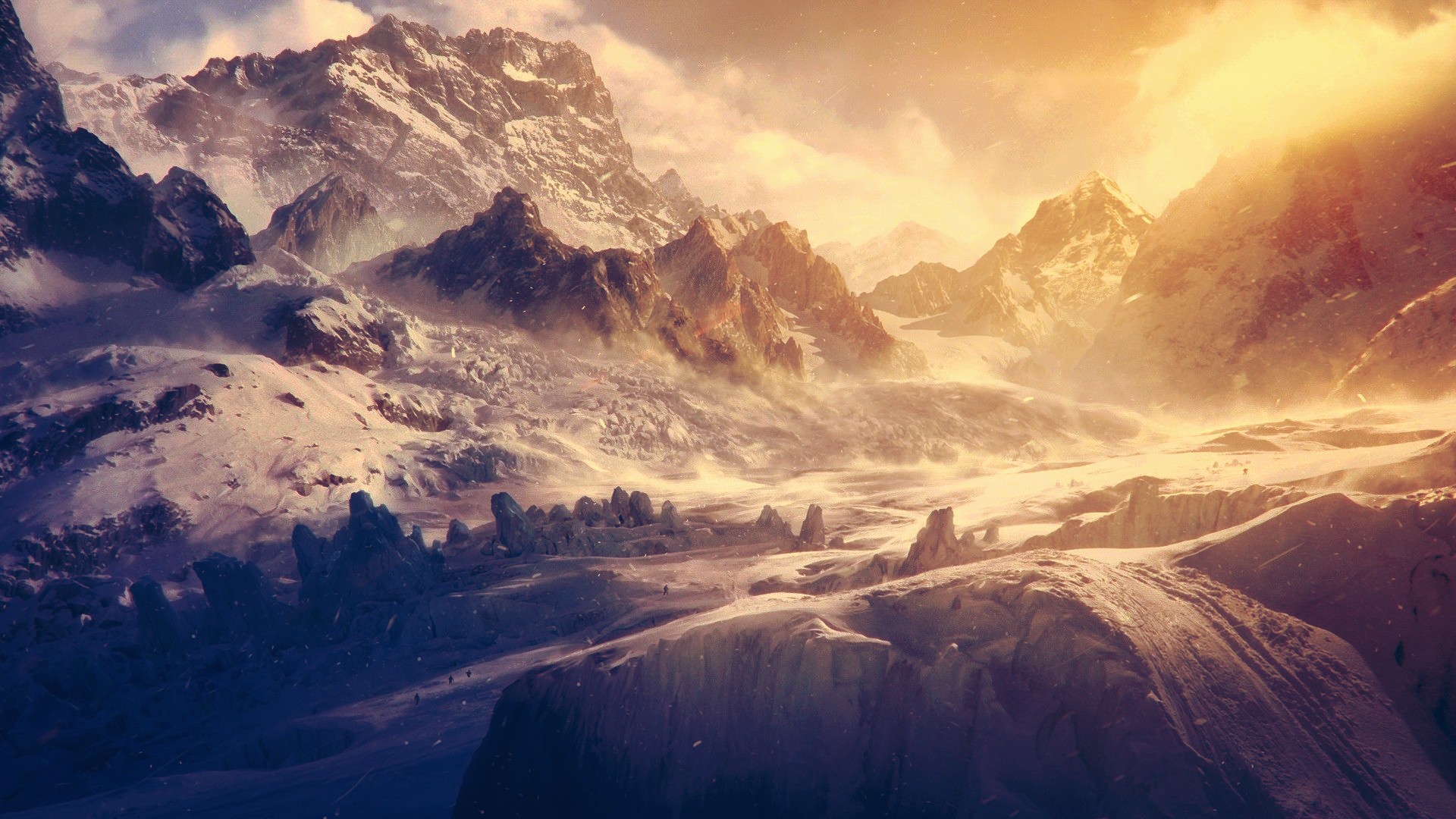 In the shadows of the towering mountains of Slumbering Peaks, the Frozen Mire is home to the village of Kul’mek and the Pale Mammoth Clan. A thick pine and larch forest spread across the northeast landmass, where large mammoth tracks are typical, and dangerous beasts such as the sabertooth tiger and snow leopard prowl.

West of the Slumbering Peaks, the timbers of Grand Wood split the Aurvang and Torvard settlements. In the center of the Grand Wood, the large lake, Bedoma’s Tear, is fed from waterfalls caressing off the mountain. The crystal clear lake occasionally sees gold and silver streaks shine across it, resembling the colors of the Last Guide.   Many Northlanders believe this to be the spot where Bedoma betrayed the other Primals during the Great Sacrifice. A common Northlander pilgrimage is to trek to Bedoma’s Tear, casting away important relics or sacrifices into the waters while shouting for mercy.

Boasting some of the oldest structures and ruins in the Northlands, Icehaymer’s dangerous ice-covered mountain peaks show glimpses of otherworldly battles waged before the Great Sacrifice. Unfortunately, traversing these structures is almost impossible due to the harsh lands and remains relatively untouched.

The smallest Northlands island hides the ruins of Wolfheim and the scorched Pyrelands. The Pyrelands island is merely a smoking volcano with an active caldera of bubbling magma, slowly burning away the forest. Dormant for centuries, the Pyrelands volcano only recently began to heat – shortly after Hrólfr, the Ancient Wolf was freed from his prison.

Home of the Rook’s Shadow clan from the trading port of Vartungard. The people of Vartungard rely on trade, whale hunters, and herds of ox and reindeer thanks to the cursed Skavian Wilds lacking adjacent farmlands. Many Northlander’s question if Rook’s Shadow brought this curse of dishonor upon themselves by angering the Primal Deities, while others wonder if it is merely the Matron of Raven’s will.

The mountainous Slumbering Peaks runs the length of the largest Northland landmass. At it’s highest peak above the Ice Troll King’s city Dwesrek, the mountain is believed to touch the Above, acting as a way for mortals to reach the angelic Harmony’s Rest.   Deep inside the mountain, the Earthbound Dwarves of Dworn lavishly rule over the rich Black Ice mines. Out of fear of losing such a valuable trade good, admittance into Dworn is challenging and typically refused. However, this has not stopped the neighboring Trollkin from trying, as the war between Dwarf and Trollkin rages underground.

Directly south of Icehaymer, the Southern Pines are known as one of the most dangerous places in the Northlands. A natural habitat for great beasts, most settlements are quickly destroyed. Only Skavius, a small settlement from Vartungard, has stood the test of time.

The trance-touched Syrpine Eves are home to the Snow Elves of Hvalsyr. In this dense timber thicket, you can almost taste the magic of the bond in the air. It is said that by bathing in one of many magical hot springs, you’ll experience a vision. These vague visions are thought to be the voices of a Primal Deity. However, the Hvalsyr Snow Elves believe that the island is a land spirit itself calling to those who know how to sincerely listen.

The Frigid North Ocean stretches from the ice tips of Erenel and encompasses all of the Northlands. The chilled winds howl as dark blue waters carry Caelian longships between each landmass.

The windswept lowlands of Wild Coast are soggy in the summers and frozen in the winter. This protection allows Sleet’s Landing, the largest city in the Northlands, to flourish under the rule of the current Warlord. Fortunately, the land closest to Sleet’s Landing is soft and fertile. Prime soil for the many farmers who feed the Warlord’s army, and in return, are protected from raiding parties.   In the center of the Wild Coast, a large crater, the Wrath of Ødger, serves as a reminder of Ødger’s strength. Caelian honor the large crater as the site of Ødger’s victory over Jotakent and his Storm Giant army.

Home of Flock’s Hill, an Aves nest for the Blood Eagle clan, Witchwood Dales is avoided by most Northlanders. A dense fog permeates the gargantuan trees, lending to the idea of the Witchwood as a haunted place where spirits lie trapped, unable to find the Last Guide Bedoma. Week-long thunderstorms echo voices between the bark as the cruel and cold hearted Winter Witches reach beyond the Winter’s Dream of the Trance, calling to those foolish enough to listen.

Adventurers in the Northlands could involve defeating the local threats or simply surviving the harsh environment.

The blacksmiths, woodcarvers, and traders found in the Northlands craft their native weapons and armor primarily from the natural resource Black Ice. Ice in name only, Black Ice is a hardened stone that appears fragile and easily manipulated until forged. Thanks to the ease of sculpting the stone, crafters can conveniently shape the stone in exciting and deadly ways.

This work is licensed under a Creative Commons Attribution-NonCommercial-NoDerivatives 4.0 International License.
The Erenel Fictional Universe is presented under the OGL rules for 5th edition. All artists have been duly credited.If you would like to have your art removed, please contact me immediately.
System Reference Document 5.1 Copyright 2016, Wizards of the Coast, Inc.; Authors Mike Mearls, Jeremy Crawford, Chris Perkins, Rodney Thompson, Peter Lee, James Wyatt, Robert J. Schwalb, Bruce R. Cordell, Chris Sims, and Steve Townshend, based on original material by E. Gary Gygax and Dave Arneson. A special thank you to the many talented people who create the world's greatest role playing game.
Cover image: by Marthe Jonkers