The Erenel site is undergoing major changes and lore updates. Please note only articles listed in the Gamingbrew Discord are finalized. All other articles should be considered outdated lore.
Reverent people with deep spiritual roots, Orcs born of Or'nn enjoy hunting dangerous predators for sport and honor across all the Architect’s universes. Old traditions cultivated over thousands of years guide the Orcs, who use a combination of technological advancements and primitive weaponry to honor the hunt.

Until recently, the Orcs of Erenel believed they were born from the Architect Al’Madoon, much like the other intelligent races found on the mortal plane. On his deathbed, chieftain Graaer Deathbrand of the Broken Tusk clan would reveal this was not the case. The first Erenel Orcs crash-landed a civilian transport spaceship near current-day Valor’s Endland, shortly after the Great Sacrifice. While chieftain Deathbrand believed the Great Sacrifice caused the ship's malfunction, he could not be certain.   The Orcs of Or’nn did not possess the means to rebuild their transport ship and decided to inhabit Erenel instead. Highly spiritual, the Orcs could still feel their ancestors on Or’nn, but new spiritual guidance washed over them as they became attuned to the might of the bond and the ethereal plane. Listening to the spirits which called out to them from beyond the veil, the surviving chieftains decided it was in their people's best interest to abandon Or’nn and instead embrace their fate. Vowing to not forget their ancient traditions, each chieftain of the original Or’nn bloodlines would carry the weight of this information and pass it down as needed.   Thanks to Deathbrand’s revelations, current-day Erenel Orcs face difficult decisions which have begun to splinter smaller clans and form new alliances amongst the populace. Clan leaders now search for the following answers as the final two Or’nn bloodline chieftains withdraw to their home territories of Valor’s Endland and Bastion.   As the Orc’s spiral from the news, civil war looms.

Orcs are tall and muscular humanoids who stand well over 6 feet and a broad 180 to 320 pounds. Their skin usually has an earthy tone or shades of gray, with broad jaws and prominent lower canine teeth. These two lower canine teeth are referred to as tusks and can grow quite large. Female tusks are typically larger than males.   Orc males and females never cut their long dark hair, as it is a desirable trait when finding potential mates. They use string and other simple accessories to keep their hair from their face in battle.

Unique to Orcs is an extra bone that can be extended and retracted from one of their forearms. The forearm, which contains the extra bone, is often their dominant hand. When extended, the bone glides outward painlessly and appears similar to an elongated blade with an arrowhead tip. This blade bone is often used in combat, while eating to pick up meat, and to carve symbolism onto their hunting trophies.

Orc culture centers on the ritualistic hunting of species deemed dangerous. Hunters will travel great distances to face opponents considered a worthy challenge. After successfully completing a hunt, the Orc will claim a trophy from their kill. This trophy varies on what remains after the hunt but is generally a tooth or claw.   When a younger Orc completes their first hunt, the bottom jaw of their kill is removed and fashioned to wear over their own mouth with string and sinew. This lower face mask can be highly stylized to showcase the orc's clan and personality.   Defeat in a hunt against a worthy opponent is considered the perfect death. An Orc would rather die during a hunt, at the peak of strength and skill, than endure the slow decay of old age.
Lifespan
Orcs reach adulthood in their mid teens and can live for almost 100 years.
Average Height
6ft - 7ft
Average Weight
180 - 320 pounds 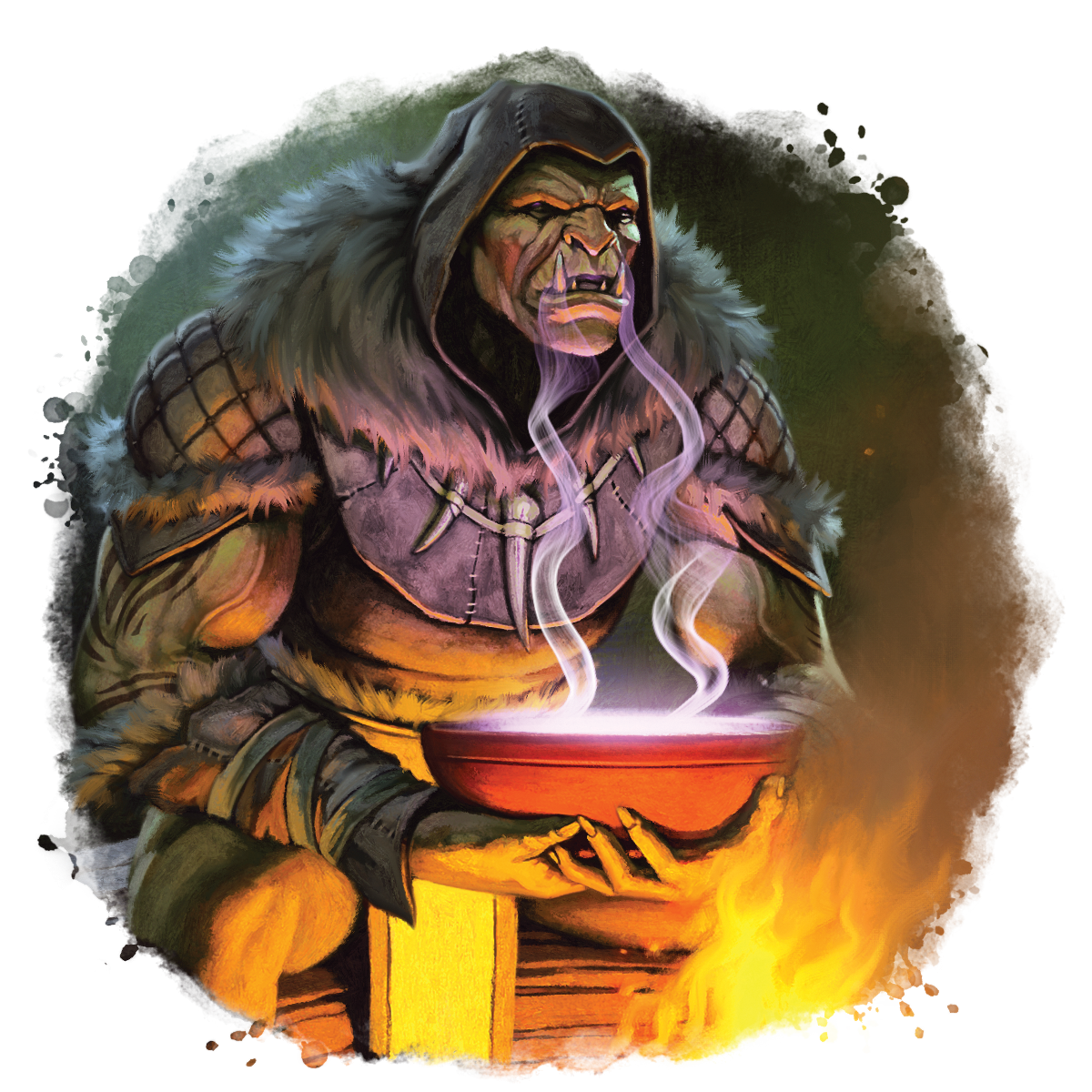 All Orcs feel the call of their ancestors from beyond the veil in the ethereal plane. However, since their arrival, Orcs born of Erenel have felt a strange calling beyond the stars. Before Graeer Deathbrand’s revelation, Orc’s struggled with the meaning of this calling. Now, Deathbrand believers look to the stars and wonder what their ancestors on Or’nn are trying to say.   Rumors swirl that the Or’nn Bloodline Chieftains have always been able to speak with their ancestors across the stars. Perhaps, this “civilian transport spaceship” can be repaired if their Or’nn ancestors can guide their hand from the afterlife. 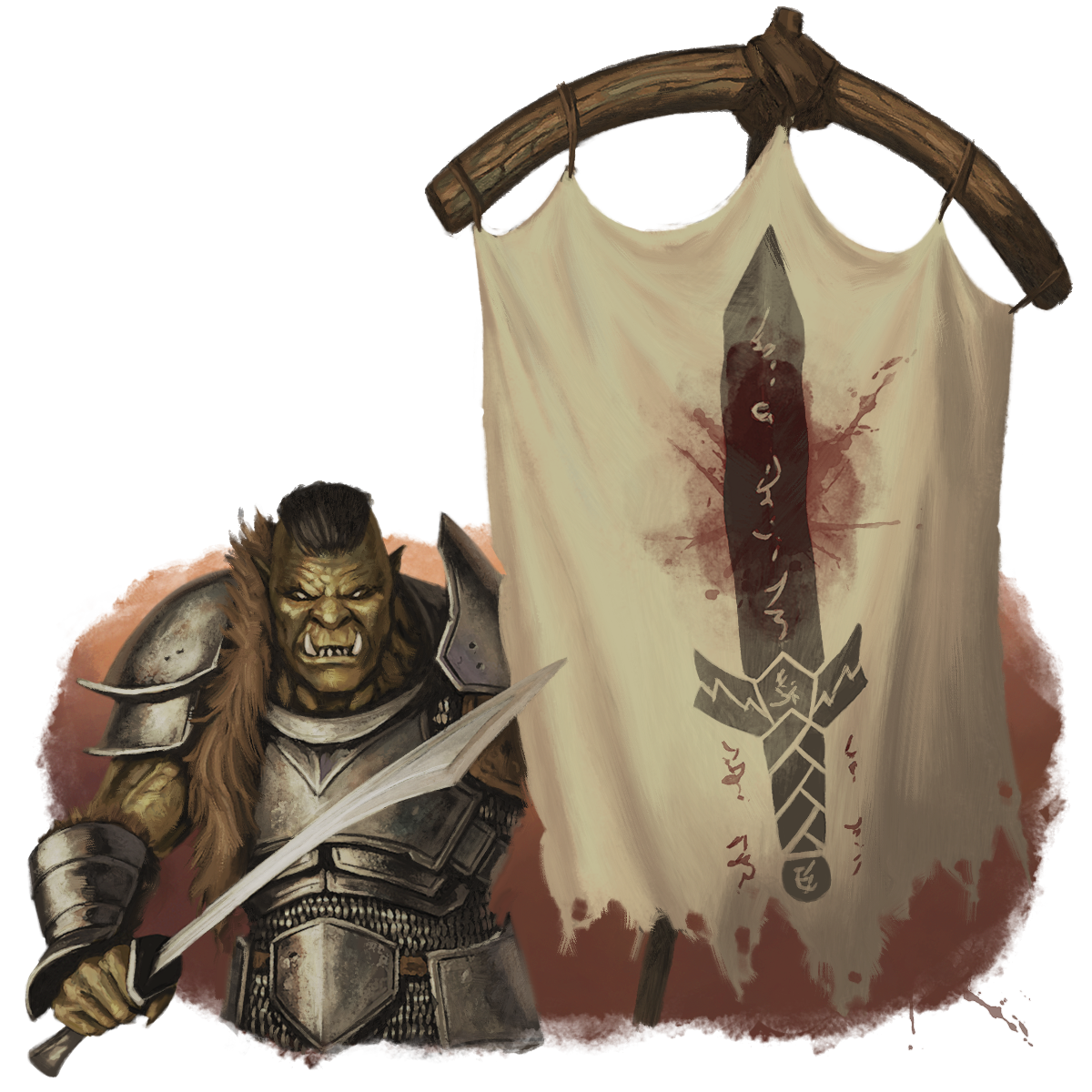 Chieftain yet to be named
Territory: Northern Wildwood

Your Orc character has a variety of natural abilities common with your ancestry.
Orc 5E Racial Traits

As a bonus action, you can extend or retract a blade from one of your forearms. The blade emerges from the top of the wrist and can be used to make unarmed strikes. When you hit with it, the strike deals 1d6 + your Strength modifier slashing damage, instead of the bludgeoning damage normal for an unarmed strike.

After slaying a worthy opponent, your kind keeps a memento, placing ancestral power and the memory of the hunt within the creatures’ bones. As an action, remove a bone or tooth from the corpse of a CR 1 or higher creature that you killed within the last 10 minutes. During a long rest, you carve memories onto your trophy, giving it enhanced power. You can have one trophy at a time.   After collecting and enhancing your trophy, you wear or stash the keepsake in a readily accessible location. As a reaction when you roll a d20, but before you know the outcome, you can look to the ancestral power in your trophy. Add your proficieny bonus to the result of your d20. After using a trophy in this way, it shatters and turns to dust.

You have proficiency in the Survival skill.

After countless hunts, your experience has made you aware of your surroundings. As a reaction, you heighten your awareness and gain advantage on Wisdom (Perception) checks and Wisdom (Survival) checks for the next 10-minutes. Once you use this trait, you can't do so again until you finish a short or long rest.

Human
Major Races
Sanguis
Join Erenel Discord!
A special thank you to all of Gamingbrew patrons, friends and family who make this possible.
A big thank you to Wizards of the Coast for the Open Gaming License and allowing a writer the chance to chase his passion. The Erenel Fictional Universe is presented under the OGL rules for 5th edition. All content and images, unless otherwise credited, copyright ©2022 by Gamingbrew Media, LLC.
All Rights Reserved.
Open Game Content: Except for material designated as Product Identity, the game mechanics of this Gamingbrew product are Open Game Content, as defined in the Open Gaming License version 1.0a Section 1(d). No portion of this work other than the material designated as Open Game Content may be reproduced in any form without written permission.