A druid's work is never done. However, sometimes a druid needs a little help.

This spell allows a druid to conjure, some scholars say ‘summon', a little helper from the Outlands. When cast, green and purple mist form and flow around the druid that eventually settles into a cloud at the druid's feet.

This cloud materializes into a 1 foot tall humanoid shaped wisteria plant. Its arms are braided vines, feet a sturdy pair of braided roots and the head another mound of vines. A pair of emerald green eyes peer out from a face framed with a full 'beard' and 'hair' of drooping purple wisteria blossoms.


Really... when I saw this, I had no words. Still don't really.
— Stefanos Vel-Barboza, Seskyalii skald alchemist


While active, this little wisteria can run about, performing simple tasks at the druid's command. It can deliver messages, fetch items, and more. But there are limitations.

The only way it can communicate is through hand... or in this case leaf... gestures. It can also shake or not its 'head'. It isn't uncommon for druids who frequently use this spell to become quite adept at charades.


It's the interpretive dance that gets you. You just can't look away...
— Stefanos Vel-Barboza, Seskyalii skald alchemist


Rumors persist that some druids have taught a Druid’s Helper to use a pen and ink. Except, the little fellow’s penmanship is often rather lacking. However, simple pictures are a safer bet.

Another limitation is on what it can, or cannot, carry. It will help however it can. But it isn't very strong. This little fellow can only lift objects weighing up to 5 pounds. It cannot open doors, or perform more complex tasks such as picking locks.

Since they are able to walk or run, a Druid's Helper scurries around following the druid where they go. As a Druid's Helper is wisteria, this may also include scurrying along walls and ceilings!


I must point out, this is a horrid sight to see the first thing when you wake and haven't had any caf or root tea.
— Stefanos Vel-Barboza, Seskyalii skald alchemist

As mentioned, the Druid's Helper may not lift anything heaver than 5 pounds or perform complex actions such as lockpicking, opening locks, casting spells, and so on.

A Druid's Helper may not attack or engage in combat. It has no attack roll and will attempt to run from being attacked, usually to its druid. A Druid's Helper has an AC of 14 due to its small size and quickness. However, if an attack succeeds, a Druid's Helper only has 6 hit points.

If the Druid's Helper loses those 6 hit points, runs beyond the range of the spell, the spell ends. Which will return the magical duplicate of the creature back to the Outland realms.

A one foot tall, humanoid-shaped, wisteria plant that can walk and grasp objects 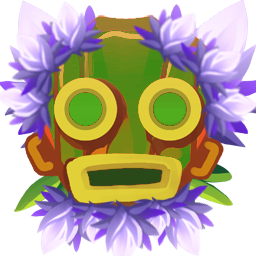 Druid's Helper by CB Ash
Gestures & Ritual
To cast this, a druid must rub a mixture of mint leaves and dried bayberries together in their hands. At the same time, they recite the following incantation in Kayam...


Wisteria helpful, quick and deep with many promises to keep

Rise from your gentle bed and help drive some worry from my head.

These sound wonderful! I'd love to be able to grow a wisteria helper. They look so cute!

Thank you! I loved coming up with this. I just imagined this little wisteria-humanoid figure running like mad, helping a druid get things... purple blossom bearded head bobbling like mad the entire way! :D

I can't with how *cute* this is!! The commentary from a somewhat traumatized Stefanos make it that much better! I love it!! :D   Can the helper wear a tiny backpack/messenger bag?

Heh, thanks! And yes, Stefanos does tend to wind up taking the brunt of things in these articles. Between this and a couple of others, he might need a small vacation!   And yes! I would think the helper could wear a tiny backpack/messenger bag! However, it would probably be best if it came from the druid. Since the Helpers are a little bit focused and devoted to their druid, after all. :D

I just saw a picture of someone's pet bun wearing a tiny backpack, and it made me think of how neat getting a message by little Helper postman would be. Definitely one way to ease the blow of bad news!   I *really* like the premise of your world; it's marvelously unique. I'm one billion percent In for more reading!

Ha! I can *so* see a Druid Helper trotting up , fishing out a message from its backpack and holding it out in front of it proudly like it just conquered the world! :D   Thank you! Elohey really does have its own "voice" that I love hearing and sharing with others. I hope you enjoy reading! :D

I want a little druids helper, maybe then all my plants wouldn't die right away. This is a really cool idea, and well written at that.

Thank you so much! I really thought "Well, Wizards get like invisible servants and so on... why shouldn't druids get little 'helpers'?" the rest... well... became the article! :D

Thanks! Oh, I think the are just amazing! :D I always picture them just cheerfully bopping along on floor/walls/ceiling running some errand for a druid

Equivalent of 'Kick the puppy': Kick the helper.