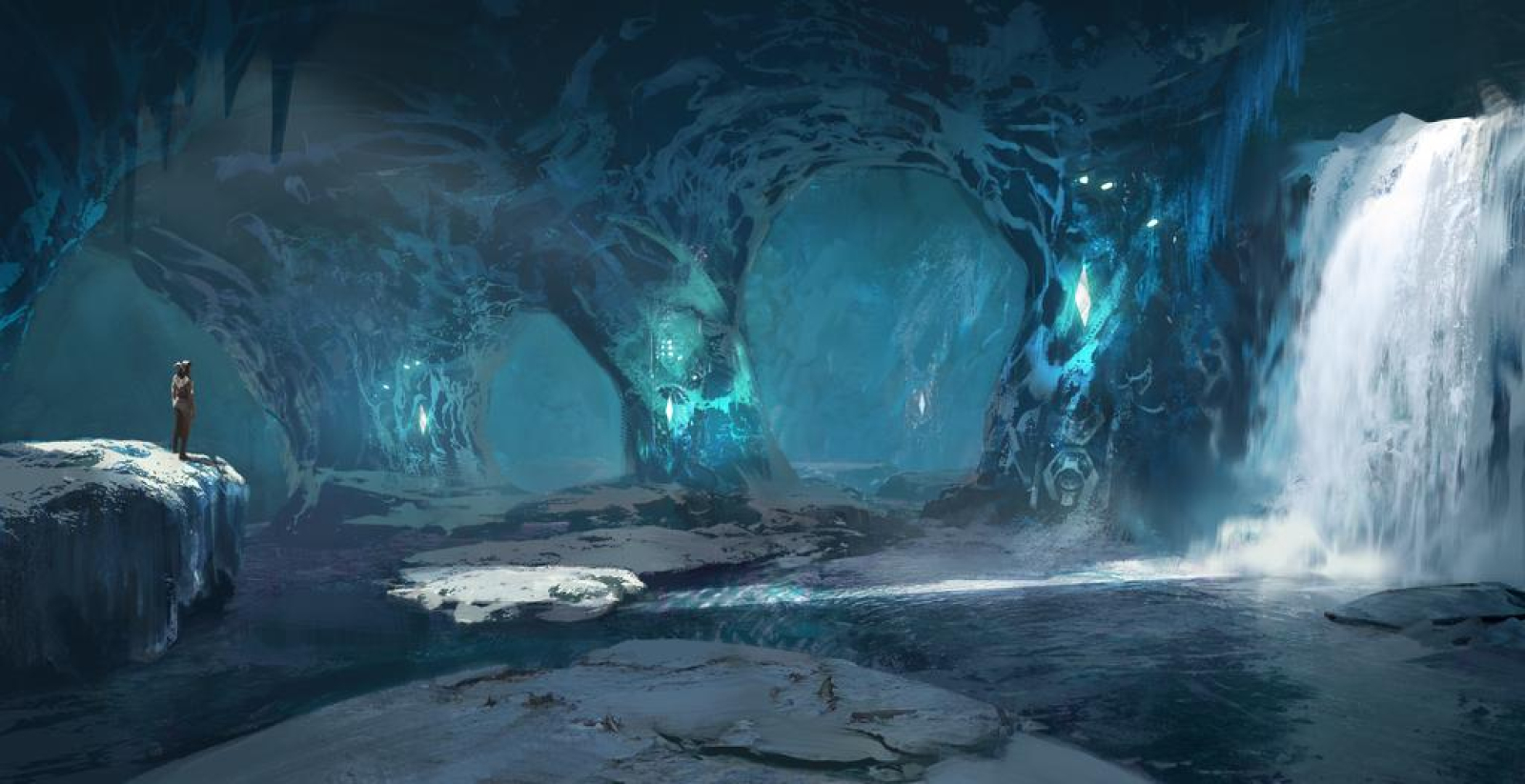 We knew we were close to the end of the ice, but we didn't expect what would be on the other end. As we finally got to the end, Stella was given the honor of striking the final bit of ice. As it fell away, we were left in awe of what we saw.   A new world. Plants grew everywhere, plants we have never seen before. They were brightly colored and many bloomed with wondrous flowers. There was also a sound, like someone was crying.   I don't think anyone expected this under all that ice.
Journal of the miner Rical Sinrock

Paradise sits on a massive chunk of ice and the Cryo sits several miles down, under the ice. This area has unique natural caves. The ground seems to have an odd soil that naturally grows some very unique plants. Many of these plants are bio-luminescent which creates an odd multicolored glow in many of the caves. There is a light crying sound that echoes throughout the strata as well. One of the biggest challenges was creating a civilization here without upsetting the natural ecology.

The crying sound originates from a very special plant called the Weeping Moss. There are a group of caves that are largely left alone by the people. The Weeping Moss crawls up the walls and pillars of these caves. It has leaf like tendrils that coil into funnels of varying sizes. They seem to grow even more around very small gas pockets that will occasionally shoot out into the funnels. This creates a very odd sound that most echoes throughout the caves. The sound of a crying child.   The Weeping Hollow is avoided both because the crying sound can be very intense in these caves and because the gas from the pockets are toxic to people.

The Cavern of Rebirth is unique compared to the other Caverns. While most of them have the Beacon in the middle, Cryo has a unique ecosystem in the middle and to avoid disturbing it too much, they built everything further away. Strata Lift shafts are the only thing built in the central area. Tunnels were actually carved almost a mile away from the central cave structures. Movement into the Cryo Caves is strictly controlled as to protect the plants and creatures. Families would have large estates carved out to try and create small eco-farms to grow and farm many of the plants and creatures.

These unusual plants grow under the muddy ground. They have vine-like stems that spread across the mud like a net. They appear to feed on particles in the mud itself. During Bellow and Krail, the vines will grow these small pods. Stepping on them makes them burst and the mud becomes even stickier than normal and stains your feet purple. The Tiern pods have a unique quality though, the purple slime inside is also used to create a very good cream that helps fight infection from cuts and wounds.

Still Moss grows from the tiny air holes in the ice. They are as thin as hair and almost invisible. When the moss grows almost 2 feet in length it will start to curl back up on itself. This will eventually create the Still Pawns. These very hard oval seeds can be collected and are commonly used like a tea. You can drop the Pawn in warm water and it will slowly disintegrate giving the water a bluish color. Pawn Tea is very helpful in treating simple sore throats as well as more serious throat infections.

This reddish mold seems to grow in several areas around the region. The moist air is perfect for the Copper Mold and it usually grows on rocks and columns. By itself the mold can be toxic. When burned, smoke seems to improve headaches. It is dried and sold in small pouches that can be burned.

Rebirth was the theme of this Cavern because of the shear number of new medicines that became available from the plants and creatures of Cryo. Medicinal research had been pretty stagnant since the Phase of Creation because most of the other Stratum had very little new plant life. Hundreds of new plants and creatures led to dozens of new medicines and treatments for common conditions. Anyone who wants to learn about medicines is required to come to Cryo for a portion of their training.   This also had the amazing effect of extending the average lifespans of all of Crevice by a little bit and creating an explosion in population

Sadly in recent years, Cryo has suffered significantly from the quakes that shake Paradise and the people are struggling to keep the ecosystem balanced. There has also been a recent decline in the economy of Rebirth. There is a growing poverty problem and it has become a common hideout for cultist groups.

Lessons of the Cascades

As people started populating the new stratum an area called the Cascades was found. These caves have a stream of water rolling down them as the ice above melts. It is warmer than most of the stratum and created almost a swampy feel to on the ground and a mist in the air. The Cascades had many unique creatures and plants never seen on the other strata. People started building structures to take advantage of these new resources and study them. Sadly the Cascades could not survive the intrusion. The ecosystem was much more delicate than they expected and the arrival of people had a surprising impact. Within just a few years, there was a slight temperature change in the Cascades as more people arrived. Although researchers tried to find ways to reverse the increasing temperature, the plants and the creatures could not handle it. Within another year, the Cascades are little more than a big mud puddle. There is a hope that new things may grow there eventually.   Many of the areas in Cryo are similar. This area has never been touched by humanoids and the environment was very stable.
Included Locations

Answering: "Describe a location in your world that is brimming with diverse or bizarre flora and fauna."
Visit ScaleyDragon's Competition Page Check all other answers to this prompt Competition Homepage