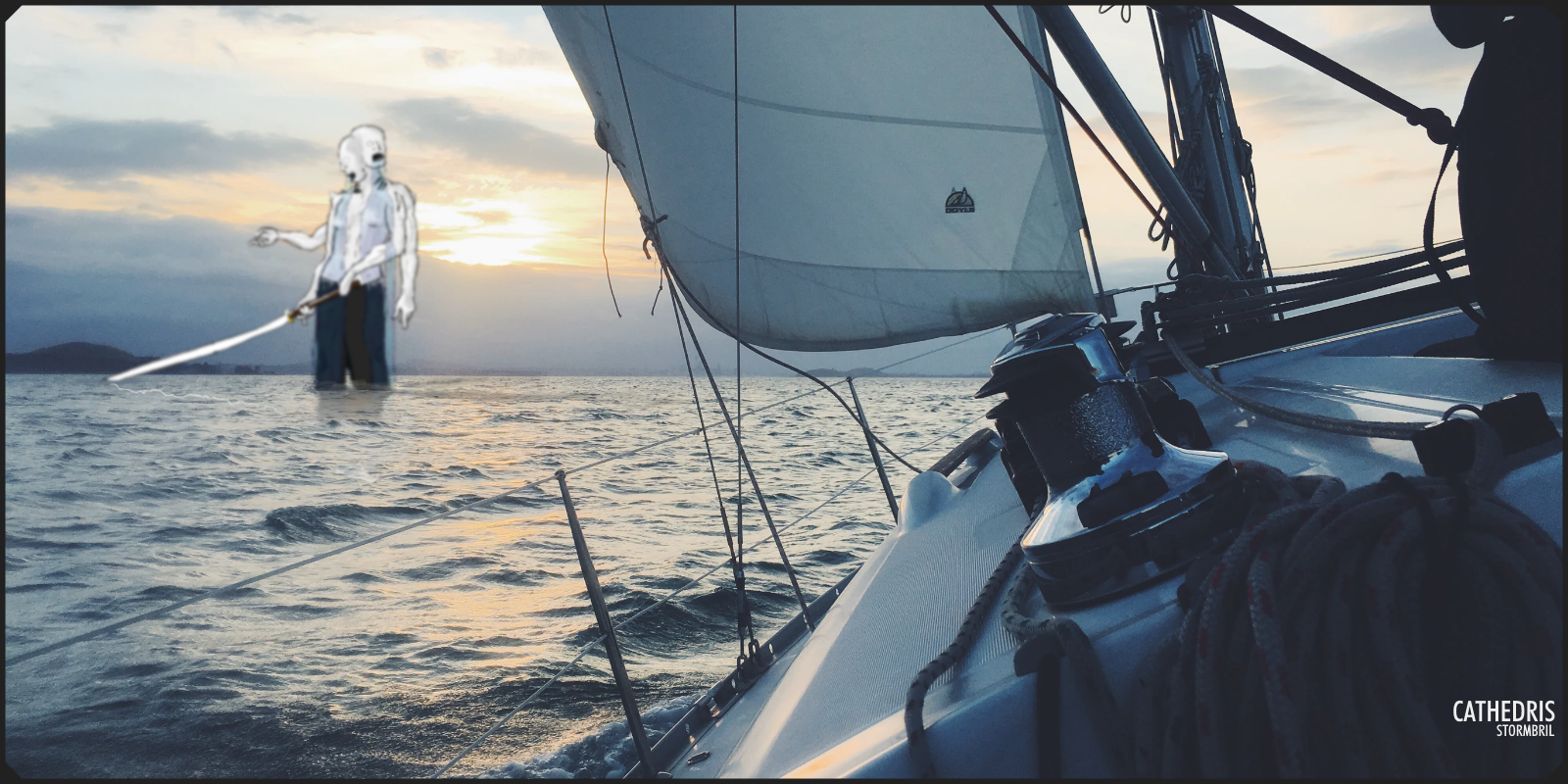 A Coming of Age, or an Ending of Youth

You didn't even go between Sharenskus's legs, you went behind em. Come back when you've done the real thing, this table is for adults only.
— Young adult rivalry

To many foolhardy youth that live across the coastal city of Russin, the path to adulthood is routed between the two giant legs of the water bound God-husk Sharenskus. If one wishes to think of themselves fully mature, they must undertake the extraordinarily dangerous stunt of captaining a sail or steam ship through Sharenskus's legs, while he is in mid stride.

The tradition is an extremely popular talking point among all those who call Russin home -- yet barely a fraction have attempted it, due to both the theoretical danger and the proven deadliness it possesses. Tales of splitting the stride are passed from older generations to the younger as a warning not to attempt the ridiculous maneuver; those tales are then passed around between students on lunch break as mythical stories of those who attempted the impossible.
Every single year, even with all the warnings, a few dozen people attempt to split the stride. Most are stopped long before they even reach Sharenskus; there's a watch tower on Break Point exiting the Russin harbour district, as well as always at least one guard boat in the water. However some still manage to sneak through -- and while there are a lucky few that survive the extremely risky ritual, a significant portion never make it back to shore.

Oh, no, absolutely not. I never even dreampt of splitting the stride -- at least, not after I watched my closest friend attempt it and nearly die.
— An older Russinian, reflecting. 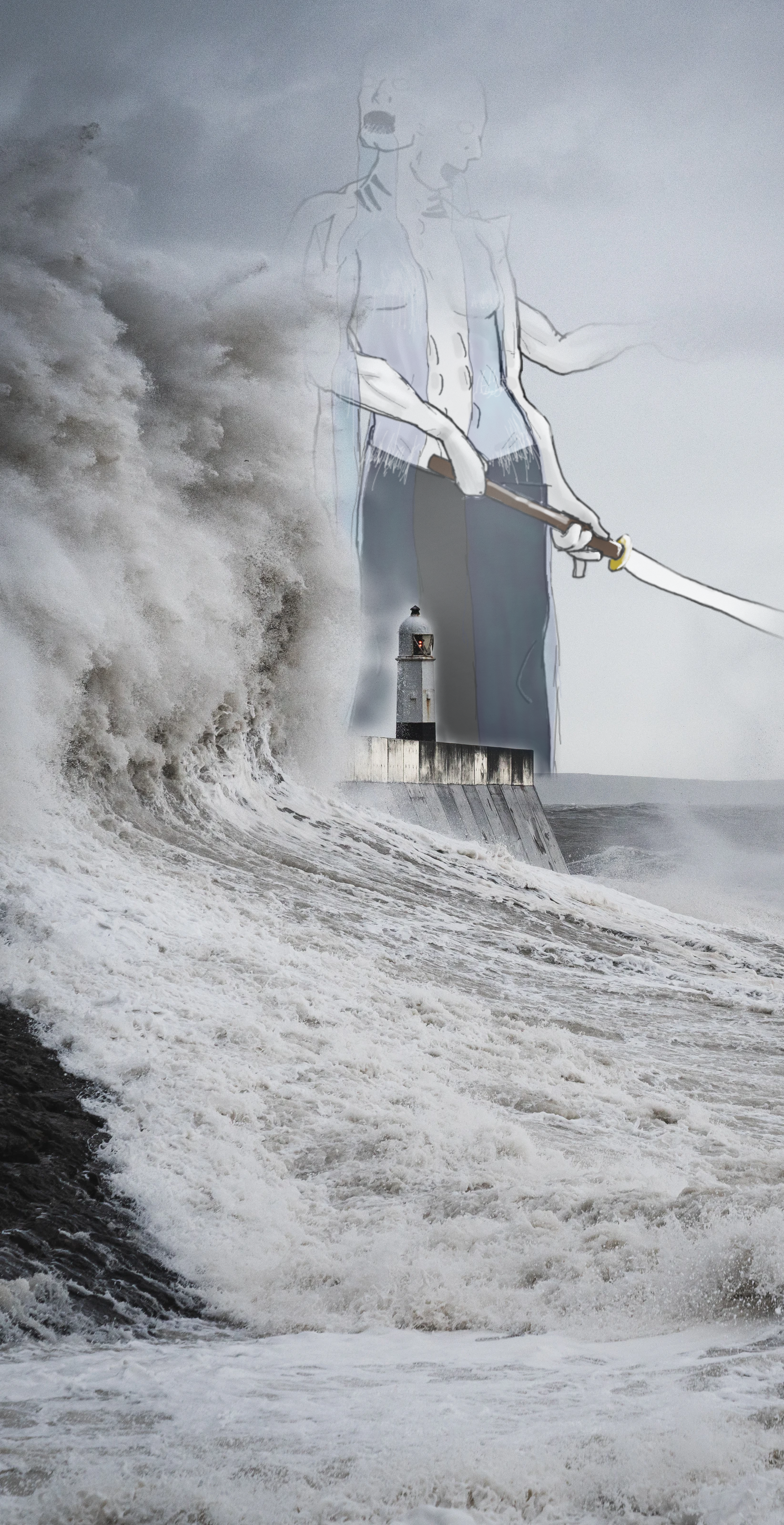 by Marcus Woodbridge, edited by Stormbril

I'm not even kidding, I heard that once someone split the stride accidentally. The captain had a few too many Russin-specials, and fell asleep drunk at the helm just after loading his boiler with coal. Woke up when the spray from Sharenskus's legs hit his face, and by that point it was too late to change course, so he just held on tight and prayed -- and popped out the other side unscathed.
— A popular drinking story

Answering: "a coming of age ceremony"
Visit Stormbril's Competition Page Check all other answers to this prompt Competition Homepage

Join Cathedris Discord!
This work is licensed under a Creative Commons Attribution-NonCommercial-NoDerivatives 4.0 International License.
All content, unless stated otherwise, copyright ©2010 - 2021 Devon Ruscheinski. All Rights Reserved. All images are made by Stormbril, unless otherwise specifically stated. World Default Header Image (Interior roof of a Cathedral) originally by Derek Story, edited by Stormbril.
Background image composited of a Cathedral Photo by Odin Lee, with mountains behind by Sorin Sîrbu, combined and edited by Stormbril.
Developed by Stormbril
Want to support me and get some neat Cathedris art? Check out the stuff I have on Redbubble!
Cover image: Art by Stormbril, base image by Artem Verbo

I love that you made a coming of age ceremony that only the foolhardy would attempt. Many such examples in our world, it is nice to see it done in a fantasy setting too!

Thank you! Yeah, I definitely remember seeing a lot of that sort of attitude when growing up -- "you're not cool if you don't do BLANK!", so it's really fun to take it in a fantasy direction too :)

Great article Storm, I especially liked the Captain that Split the Stride on accident :D   Also, I am wondering are there similar tests of courage performed with some of the other God-Husks?

Thanks Sloqush! :D   There definitely are -- many of them are more extreme versions of Danger Tourism, done totally unsupervised! Not many are as iconic as sailing through Sharenskus's legs mid stride, though.

This is such a cool take on the prompt. I could easily see this being a thing in cathedris. Well done. The quotes were a nice touch as well.

As always, I am both afraid yet interested. I think I would end up being the people stopping the foolhardy children attempting this. Gosh, it sounds so cool though.... i love it :)

Absolutely! A little bit of risk is okay, but danger on this level for what might be considered a "dare" -- no thanks! xD