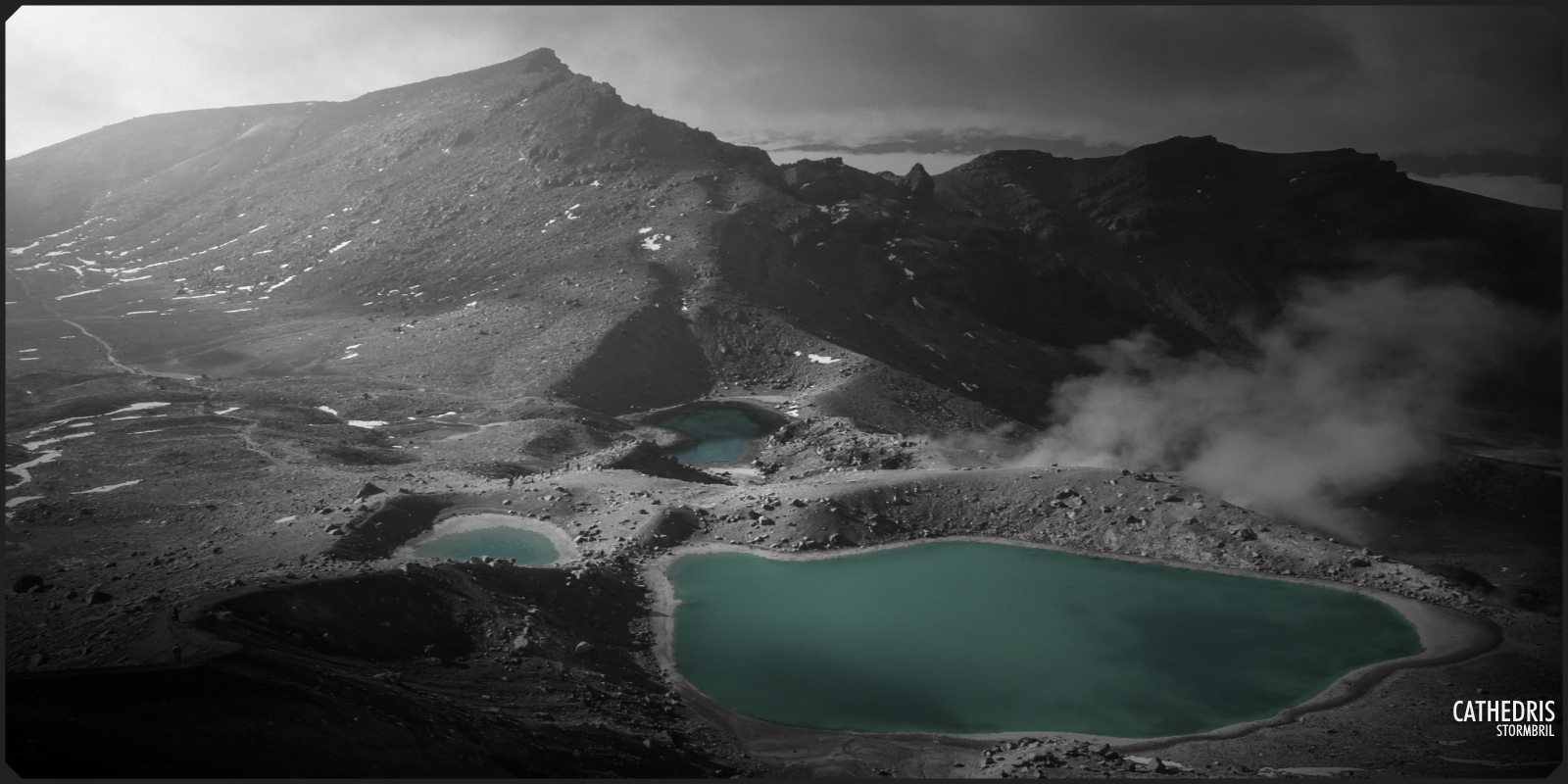 It's said that only once did He'an ever weep -- the day they learned of their death, and the trials that would befall humanity following it.
— He'an Mythos

He'an Wept is a series of closely clustered lakes found in central Moonfal -- the lakes themselves have no formal names, but are instead referred to as the "teardrops". The lakes are all close enough to eachother that some consider them as just one giant lake rather than a cluster -- each of them are fairly shallow, with uniform, circular shapes and smooth shorelines. These lakes, and their origin, are tied closely with the God-husk He'an.

Tears of a god

It's commonly believed by all who live near, or all who worship He'an, that these lakes were formed by He'an themselves, when they shed giant, god-sized tears long ago. Many theorize that He'an had gained insight into the future, and that knowledge of coming events caused He'an's great overflowing of emotion.   However when it comes to theories on what caused the tears, there is far less agreement. Some believe that He'an wept with joy, while others think sadness, fear, or even pain, caused the tears to flow down He'an's face.

Some will say these were tears of sorrow, but don't let them fool you. These lakes were born of love. Patrons
click
tap
here for bonus info
If you want to see extra info, consider subscribing!   ~   If you already are a subscriber, you may need to log in!
— He'an Mythos

He'an, above all other gods, loved humanity. They loved humans as they were -- to He'an, humans needed no change, and deserved no hardships.   This love was so strong, that some believe it resulted in tears flowing from He'ans eyes, as they looked with heart full of love at the perfection that was humanity.

Other theoriests have similar, but slightly different ideas regarding the cause of He'ans tears; some think that He'ans love was consistent, and thus needed some event or trigger to begin the weeping. These theoriests believe that when He'an learned of the future, they wept great tears of joy knowing humanity would survive, and even thrive, after the assasination of He'an.

The most common of all the theories is that He'an Wept, and the lakes within, were created when He'an cried tears of sorrow. Most think that when He'an learned of their impending doom, they cared not for their own life, but instead wept for the hardships that humanity as a whole was about to endure.   Many point to the difficulties of daily life -- the Rendlings, corruption within the Legion, and abundance of Snakes as proof of the pain that He'an saw coming.
Type
Lake

Flora
Devoid of trees, but featuring many species of grass, lichen, and fungi

Favourite among the gods

He'an held a special place in humanities hearts, both before and after The Seven Day War, when He'an was murdered and life on Cathedris was changed forever.   He'an was the largest of all 14 gods, and seen as the most beautiful of all. They, above all other gods, cared most for humanity. Humans were to be protected and loved, and if He'an had their way, would never befall a single hardship or experience any misfortune. Humans had no need for change or adaption, because to He'an, they were perfect.

Do you... think it's possible He'an loved us too much?
— Gentle questioning

The story of the assassination of He'an, one of fourteen Gods of Cathedris, whose body now resides in stable orbit around the planet.

Answering: "an area or geographical landmark wrapped in myth, legend or superstition"
Visit Stormbril's Competition Page Check all other answers to this prompt Competition Homepage

Lovely, just lovely. A creation myth not mainly rooted in pain. I like the different interpretations as well. Great article :)

I adore this. "Some will say these were tears of sorrow, but don't let them fool you. These lakes were born of love." --> This quote really hit me in the heart. I really like the theory that as Ha'en's love was consistent, lan event or trigger was needed to start the weeping. It's just brilliant.

Thank you Brins <3   He'an is a lovely god to write -- there's this strong, simple core to them, that really is great to expand upon.

I like the different theories. If the lakes really comes from He'han's tears, does the water have any particular properties? since the blood give rise to the Rendlings, I'd expect tears to also do something strange even if not necessarily bad.

That's the thing -- as far as people can tell, there's no immediately apparent properties of the water. It seeeems just like regular water.   But for whatever reason, the people who visit the tears report slightly higher happiness in general, following the visit!

This is such a cool landmark - the literal tears of a god, forming lakes. Such an amazing concept, amazingly executed :D   Does the water here some special properties, real or imagined? :D

Why thank you, Q! :D   As far as tests and instrument readings go, no, there's no detectable properties in the water. However, for some unexplained reason, people are slightly happier after the visit these lakes and swim in/touch the water. Who knows!

I know I don't comment often, but I always enjoy every single one of your articles. Today though I wanted to make the time to mention how this article really touched my heart. Especially the sorrow theory. Because that is the one I believe in. Truly wonderful work, as always. :)

Aw, thank you so much! There's no need to comment at all, because just reading is amazing -- but this comment definitely made my day :) The sorrow theory is my favourite of the 3 as well, and if I had to choose, that'd be the one that's canon :)

;-; He'an   My eyes filled with tears as I was reading this. Maybe I'll create my own lakes.

All of the God-husks are really well thought out and always entertaining to read about, but something about He'an just hits different. Everything around them seems so sad and tragic, and then to be cast into space with so much mystery around them...   Excellent stuff, as always.

Thank you so much <3 That's a really meaningful and touching comment to leave -- I'm really glad He'an resonates so well, I love writing about them and the impact they have on the world!