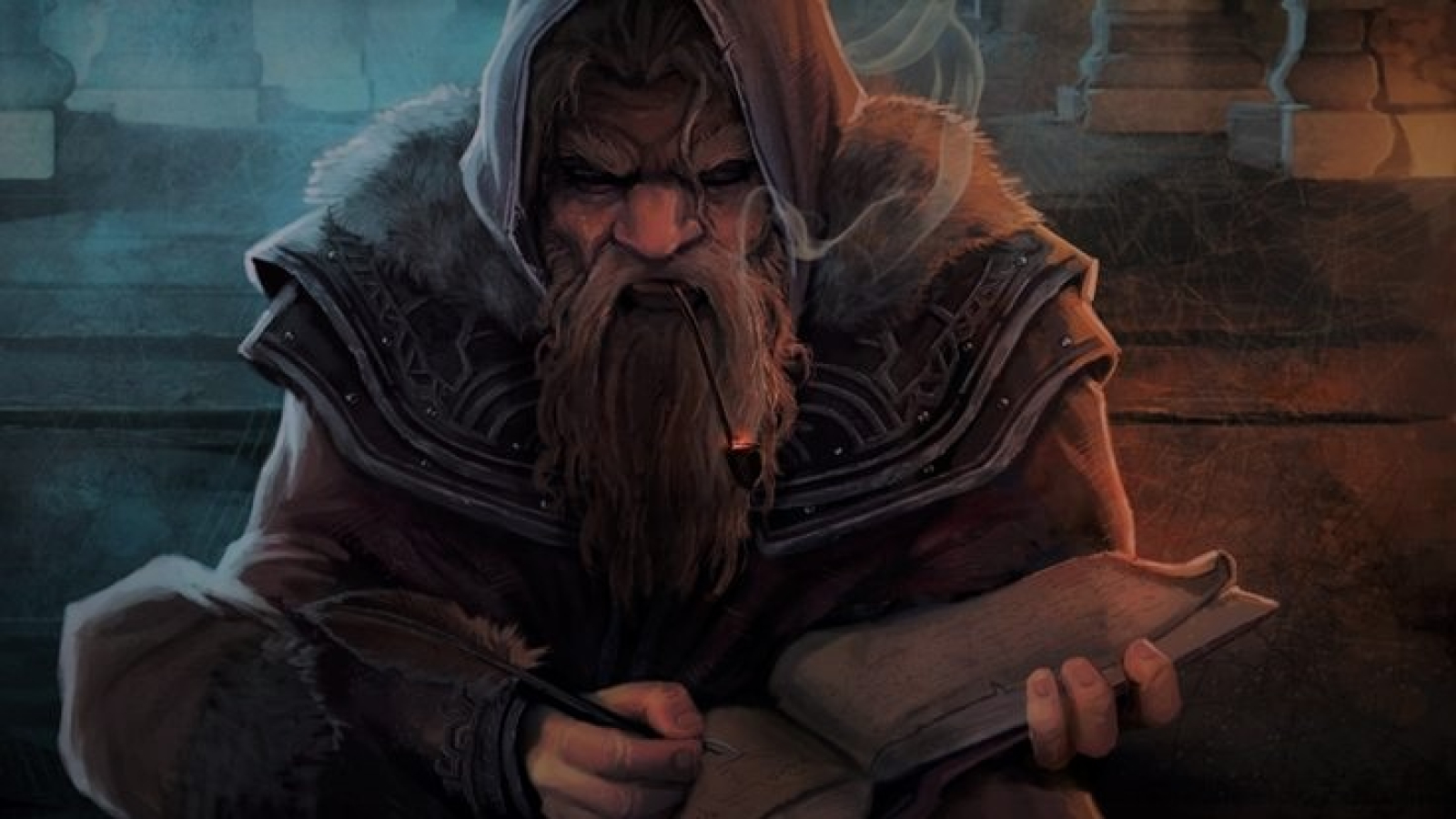 The tale of Krotar Shadowthane serves as a constant reminder to all those tempted into searching for forbidden knowledge.
— Tivon Ressler, Human historian & author of the book 'The Dark Council'

Krotar is well documented as being a curious young boy, always with his head in a book. The Shadowthane family as a whole were, and indeed still are, regarded amongst the top families for research and learning. Many of the family members are the top or near the top of their respective research fields. The majority live up to their family name and research into ways of defeating the potential evils of the world.   Krotar himself though, particularly enjoyed learning about the unknown and was drawn the mysteries of the Primal Age. However, such knowledge was deemed forbidden by the Scholar's Guild due to its inherently dangerous nature. The beings of that time literally were capable of ripping apart landmasses and reforming them to their own desires.   However, Krotar pursued this line of intrigue in secret, until one day he was witnessed performing a ritual from what appeared to be an ancient manuscript. The result was a tremor that shook the entirety of Khul Boldir not powerful enough to cause any real damage, but noticeable throughout the capital and deep into the mountain itself. The manuscript was gone and Krotar, following a trial, was banished for his actions.

Free from the rules and restrictions set upon him by the Scholar's Guild, Krotar accepted the invitation to join the Dark Council. Krotar became the sixth member. It is unclear when Krotar discovered his new connection to a much more powerful entity, but it is assumed that it was the ritual that caused his dismissal that forged the connection in the first place. Astrona Emberwild's notes recovered following The Siege of Arkran, speak mostly of her own actions. As such, there is a gap of knowledge following Astrona's references to bringing in Krotar and when Lothaire's notes (the eighth member) begin following the vampire's own recruitment months later. Lothaire's early notes do confirm that Krotar had already managed to become a competent, at least, Warlock by that time and refer to the arcane training the sorcerer in the Council was providing. Orsa Algrun, as she would later be identified - for she was still working within The Dawn's Guard as a mole until a year later. However, as Astrona's adeptness in magic was divine, and then necromancy and the last addition of the council, Thanoth 'Nightcarver' Gathakanaki's being druidic, Orsa was the de facto mentor to Krotar.

Even though Krotar is older, at least I think he is - Orsa has an ageless quality to her, it is very hard to tell - he remains a dutiful student. He listens and he practices her teachings. Orsa does not display quite the same set of magical abilities, but the techniques seem be transferrable, judging by Krotar's progress.
— Lothaire, from Lothaire's Journal.

Under her guidance, Krotar became a more formidable opponent each time he faced off against the forces of Light. He, like Astrona, was not seen on the frontlines very often, only ever seen in major conflicts like the corruption of the Ancestral Tree. It was as if the Council were protecting a valuable asset. The reason why revealed itself late on in the war, when an unimaginably destructive force was unleashed upon Aldenia.

It is unclear whether or not Mohzall himself was Krotar's patron. However, Mohzall was the fearsome Earthquake Dragon brought forth through the portal to the Earth plane that Krotar created during the final year of the Cataclysm Wars. According to Astrona journal, a rudimentary agreement was formed between Mohzall and the Council. Mohzall could destroy whatever he wanted, as long as Arkran and the surrounding area was left untouched - in order for Astrona to complete her goal, whatever that may have been. Whoever Krotar's patron actually was, their apparent end goal was this escape.

Krotar died following Krotar & Orsa's face off against the combined magical forces of the Light's Army. They gave a good account of themselves until the sheer volume of magical attacks became too much to defend against and left the pair nothing but charred remains.

The Shadowthane family's reputation took a minor hit, but being part of a learned institution as they are, the community understood that one rogue member should not affect the relevance of the family as a whole.   However, the larger implications of Krotar's actions would change the landscape of the magical arts and how society viewed the Primal Age. The Earthquake Dragon and its fellow Primal kin were regarded as myths until one showed up and obliterated sections of the continent. Elemental Warlocks are regarded with even deeper suspicion ever since Krotar, purely because of the association to this singular individual. Ironically though, due to Mohzall's appearance confirming the existence of Primal Dragons, at least, careful and controlled research into the Primal Age has begun amongst the Scholar's Guild - the very thing that Krotar wanted in the first place.

Very good articlem though a bit confusing to read when you're not into the world yet. If you add excerpts to linked articles, those will show up as a tooltip when hovering over the links, so that might help a bit. There was an extra "through" in the second line of Mohzall i think. In that chapter also, according to what notes? Also, why was Krotar so interested in that particular part of studies? was it for protection, for his own power, or was it just pure curiousity that he was willing to risk life and limbs for? Was he always just a students, did he never become a teacher or equal even though he grew so much? What was his relationship to his family and what did they think of it/him after he was banished? how did he feel about them? did they do anything to protect him or prevent it? Hope some of this is useful to you and good work ^.^

Fixed the textual problems. As mentioned in the article, Krotar was drawn to mystery and the Primal Age was the biggest mystery of all as barely anything exists in regards to it.   I haven't written Orsa's article yet but she was a master of magic, so she was always the teacher in that relationship.   His family just pretended he didn't exist after that.

Quite a nice article! I was wondering why exactly the knowledge is forbidden (being kind of a truth-seeker myself)? I understand he went down a dark path, but why is dark magic all that bad? Wouldn't common knowledge of its benefits and risks be more than enough to deter those that try to research it (compared to just a hard "we don't go there").

It's common knowledge (among the learned) that the Primal Age was full of danger and raw power, which is why it is forbidden to directly research it.   Krotar didn't intentionally go down a dark path. In a way, his story parallels Astrona's in that whatever entity he communed with during that ritual had malevolent interests and turned him over time. Also, similarly his induction to the Council was much like Grevlin's, an outcast who was promised what society had forbidden him. Though, unlike Grevlin (who was just plain crazy), Krotar's personality did shift to the evil end of the spectrum somewhat.

I like the character well enough. Didn't notice many grammar errors so all is well :D now this is a world km not familiar with so its hard to kind of not ask questions abiut it lol. So if add some more info about why their is inherent danger in his studies. Im sure it part of your world but a little summery will explain a lot and give context as why things turned out the way they did maybe even provide foreshadowing for the various things that happened. Hmmm my question is this. How did the family feel abiut his banishment. I may have missed it and if i did lemme know I'll ask more. But i don't see much regarding how the character and the shadowthabes felt abiut it. I have many questions. Lol.

The answer to that is in another comment above. Essentially, they just moved on, took the minor hit to their reputation and pretended Krotar didn't exist, the standard response of noble families haha.

Oooooo why standard? Is it their image, indifference?

Well, I mean it's the standard noble family 'black sheep' trope seen in all the stories haha.