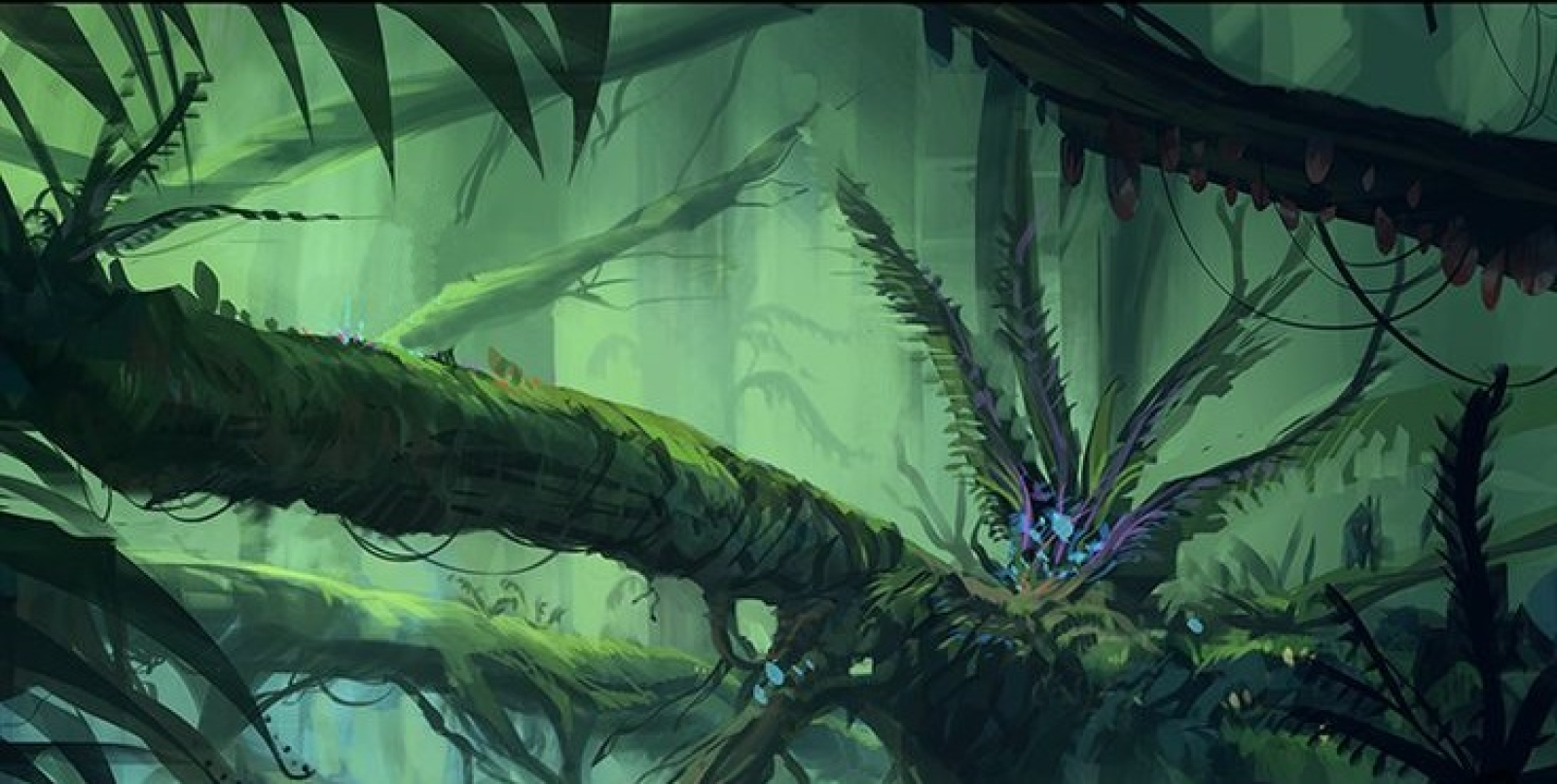 "Ten days have passed, since our little expedition finally managed to cross the mountainrange of the mist mountains and I first witnessed the forest from afar. An ocean of treetops spread out before my eyes, too far away yet to make out single trees, but the famous worldtrees I didn't see. These giants should have towered over the surrounding forest, each tall as a mountain, yet all I had been seeing for the last ten days was the ever closer coming spread of treetops lying like a green blanket beneath us. Whenever i asked Tiairi, our elvish guide, about the missing worldtrees, she just raised her right eyebrow and smiled arrogantly derogatory, which almost drove me crazy.   Today though we finally arrived at the edge of the mountainrange, after following the run of a rather broad river for the best of the day. I did hear the thundering turmoil of the waterfall already miles away, so i knew that this would be the day on which i could finally see the forest up close. Realizing this I increased my pace, soon almost overtaking the advance party with Tiairi. She held me back.   I was not prepared.   We did reach the waterfall and while the others began to set up camp for the night, preparing for the descend into the forest the next day, Tiairi guided me to the very cliffs edge next to the waterfall. I saw the water crushing down almost 3000 feet, but the green spread of treetops lay only about 600 feet below us.   Almost like in one of those pictures in which an observer could recognize two things at once, like an old women and then, suddenly, a young one, or the two faces that formed a vase, my perspective shifted and i inhaled sharpely...   What i had thought of as the tops of singular trees, had been merely the end of branches. The eternal forests didn't just contain worldtrees... they were made of them. And just like this my nervosity and anticipation was replaced by something much more fitting when facing the eternal forests...   Fear"
— Excerpt from the diary of Sulacio Kerbikonen, found next to his gnawed off mortal remains on layer 4.

The so called "Eternal forests" constitute the single biggest continuous arborean body on Ardu, not just in area, but also in height. Dominated by the gargantuan Onauru trees, the largest kind of world tree, whose treetops reach heights of up to 2400 feet (800 m), the forests are home to a mindnumbingly large number of different species, preying on each other in a neverending fight for survival that plays out not over one, but over seven different biospheres.   Starting from the lush tops, which bristle with life, especially the flying kind, and then climbing down, one would pass through seven different layers, each with different fauna and flora, before reaching the boggy ground, cast in the eternal shadow of the flora above it, and home to strange and oftentimes dangerous carnivorous life just waiting for one careless soul to find its way here (usually after an already fatal drop following a misstep).   The forests are home to the Sidhe or Sitha, Wood elves, which have their settlements usually on the third and fourth layer, protected enough from the flying terrors of the first layer, yet still far enough up to enjoy the benefits of greenish tinted daylight.   Further down, cast out from the Sidhe society to which they once belonged, live the duskelves, the Norns, in the constant twilit lower regions of their Hometree, those at least, whose ancestors didn't leave during the great Norn Exodus. They call all layers below the fourth their home, live in caves, tunnels or on alcoves formed into the massive treetrunk of their hometree, and take great pride in their ability to survive in this harsh and predatory environment.   Most hometrees also have Norntunnels that lead through some of its many rootstrands into the upper underdark, a web of tunnels and caves, which spans beneath all of Ardu, eaten into the rock by the roots of generations of former hometrees and thus supporting the elven legend that once all of Ardu was covered in forest.   No Norn of sane mind would have formed these tunnels through the roots of their hometree though, they were formed and used by Norns which followed the "Dark Call" and turned into drow after vanishing into the underdark below, in the process damaging the wood beyond repair, and thus preventing the Norns that remained from just closing these tunnels again.   Today they are called "Drowtunnels" and present an open gate for drow invaders or other Plague creatures, which dwell in the underdark. But, as nothing would prevent drow from just forming new tunnels into the tree once they reach it, the norn have, instead of just guarding the drowtunnels, begun to keep a foothold in the underdark itself, preventing the creatures of the Plague (and what else creeps in darkness), from even reaching the roots of their tree in the first place.

The flora or fauna of the eternal forests is far too numerous to give a complete overview. Also it changes, sometimes drastically so, depending on the layer.   A comprehensive description of which flora and fauna can be found in the descriptions of the different layers.

The most important natural ressource, which the eternal forests provide, is ironwood made from the Onauru tree. Being over 2400 feet tall, normal wood would't be able to sustain the tree's own weight and so older wood, like that of the layers four to seven, incorporates iron extracted from the ground below, by roots that run almost a mile deep into the earth, burying through rock and soil alike. Due to the iron, the wood of the respective Onauru tree slowly takes on a reddish tone, faint on the upper layers, but strong and prominent on the lower ones, tinting the bark and leaves down there in a dark reddish brown hue, which reminds in its colouring at old blood.   Forming this wood, or harvesting it, is an art in itself, as metal tools rarely survive more than a few strikes at old treebark before turning blunt. The Norns and Sidhe thus use their natural aptitude for druid magic to gather this special wood and form it into useful tools or weapons.   The Elves harvest only from their own hometree, to which they feel a special connection, thus turning every weapon into a piece of home, each with deep spiritual meaning to its wielder. In order to protect their home, the elves never take more than necessary, and even use their keen druidic understanding of balance to prevent taking too much and in the process hurting their hometree irreparably.   Other ressources provided by the eternal forests include curative berries and herbs, as well as Drak mounts and a nutritious juice won from the giant Onauru berries, but also deadly poisons and powerful mindbending drugs like Skeem or Cryst. 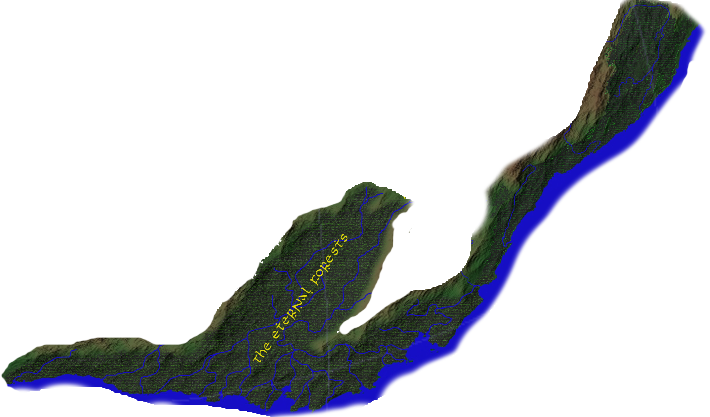 Thank you very much. I am just learning how to use World Anvil, yet i am a little exerienced with worldbuilding per se. I used to do it for my old RPG Groups. Now I am developing this one for the new campaign I am DMing and i am REALLY happy i found this page.   It is actually good practise to write everything down as it is also the very first try in explanation. A DM has to do it through narration / reveal by in game Characters later so it's good to train already. Also it clears up headspace to find flaws and inconsistencies.   Journal entries are easy to do usually, there is rarely any buildup necessary, and one can add any information directly under the presumption the writer of the journal entry wants to explain it too, giving some leeway with the "Show don't tell" rule.