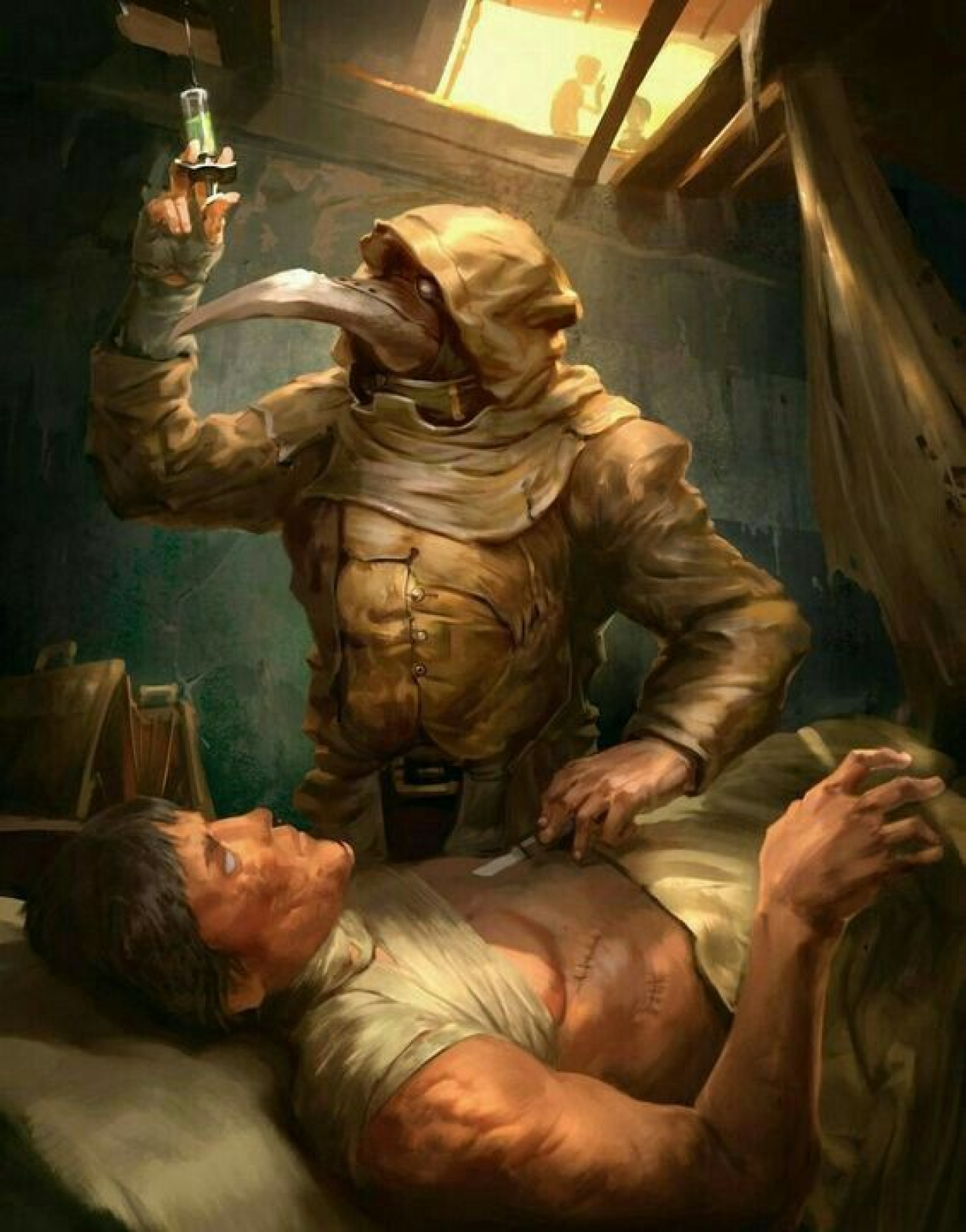 That yawning, infinite expanse above us made my head spin and my legs quake. The light was everywhere and stabbed my eyes like needles. Why did we ever agree to come to this place? We were never meant to life on the Surface!
— Sun-Sickness Sufferer

To those who have spent their lives deep underground, surrounded by stone by all side and shrouded in gloom, stepping out onto the Surface can be a traumatic experience. There is no ceiling here, no walls that make their world small. The sun and moon are blinding to eyes accustomed to darkness, while the ambient level of Blight is higher than anything in the caves.

Sun-sickness is caused when people from the deep caves emerge on the surface for the first time. Almost every element is foreign, from the wind to the vast expanse of land or the light of the sun. The sky yawns over their head and stars stretch on into infinite. To the unprepared, the Surface is too vast and too terrible to comprehend.   Even those who have been to the Surface before can be struck by Sun-Sickness after long periods back underneath the ground, though they tend to be less severe the more they've been on the Surface.

I couldn't understand how something could be this big. No matter what direction I turned there was blue above our heads as far as the eye could see. Never have I felt so small, so.. Insignificant.

The symptoms of sun-sickness range from physical to psychosomatic, with the latter varying more from person to person. The most dangerous and immediate symptom is temporary blindness as even the light of the moon is greater than what many see under the ground. At the same time, light makes the skin swell and turn an angry red. Nausea and vomiting follow quickly with dehydration being a serious concern on the barren surface.

Particularly mean-spirited Blight-Trackers who are guiding first time visitors to the surface sometimes start a bet about the volume and trajectory of their wards expulsions.

It is to the seeming infinity of the Surface that people react differently. Some react with wonder and awe, but no ill effect but others are not so lucky. Vertigo, loss of balance and or even paranoia can strike those who find themselves beneath the sky. Crippling terror can rob even the most stalwart of their voice.

The best treatment to Sun-Sickness is to stay hydrated and gradually acclimate to the environment. Experienced Blight-Trackers are particularly good at this and can take their patrons through the process until they can function. This process can take days and in some cases weeks, depending in part on where on the Surface they have emerged.   Some, though, are less gentle. They believe the fastest and best way to conquer the Sun-Sickness is immediate and total immersion. Sun-Sickness isn't usually fatal, but these sort of treatments risk the patient dying from dehydration.

Sick of the Sun

The phenomena of sun-sickness is well known and most of the mechanics behind it is fairly well understood. Even so, many who go to the Surface for the first time find themselves struck by the intensity of the symptoms. There are any number of home remedies and cures, with varying degrees of helpfulness, and endless charms that do absolutely nothing.   On occasion, inexperienced doctors will confuse Blight-poisoning with Sun-Sickness as they share some symptoms. This is twice unfortunate, should the poor soul be suffering from both.

How do you best deal with Sun-Sickness? My advice: Don't go to the Surface.

The Surface   Most who live in Araea do so far underground, for the Surface is a blasted wasteland. Haunted by terrible beasts and great Blight-infested dust-storms, it is a place hostile to human life. Sun-sickness is only one of many hazards awaiting those who seek to explore the Surface.   Read more about the Surface

No other tome on the surface has gained such popularity as "Surviving on the Surface - a practical guide and its application", despite the fact that is almost entirely wrong. To those who have never gone and might never go, the tome's confident tone can be very convincing but its advice on dealing with Sun-Sickness as mere "mental weakness to be overcome" is entirely unhelpful.   Read the guide to Surviving On The Surface

The elements of the Surface bring the body out of balance, causing the sickness. The Surface is a different world and requires a different balance. The patient should eat and drink to aid the transition to this new balance, focusing on dry and hot food with as much water as they can afford. When they go back beneath the ground, this should be reversed and water should be avoided while the patients food should be cold and wet.   Read more about Atma - the Science of the Balanced Body

The sun and wind are best thought of as a type of venom. Just as the spider-rancher soon grows resistant of their venom, so too will the patients body adapt to this toxic environment. Areas known to be Blighted should be avoided and the patient should stay out of direct sunlight until they feel confident they have adapted. Drink plenty of water. Some doctors recommend carrying a warding charm.   Read more about Deva - the Art of Healing

In your opening quote. Is it to live or for life lol i think you tried to has both and opening paragraph i think it's sides not side but enough about stupid grammar rules, i don't have much context on those who dwell in caves but i understood the article well enough. I'm curious as to why they end up dehydrated? Is it the expulsion? This could be my fault. I always understood vomiting as a process of emptying the stomach, and if there isn't much there, not much will come out, (though if I'm right on that this would mean a blight tracker can help with the symptoms by ensuring the afflicted don't eat before venturing onto the surface, which will lead to dry heaving but little loss of moisture Which is kind of a cool idea so head cannon ) if one was dehydrated before vomiting will make it worse but i don't know if would cause it. Something else is that vomiting so much puts a lot of strain on the diagram and ribs leading to muscle strain and I'm sure someone somewhere has broken a rib due to coughing and vomiting profusely. Gross but it's interesting and Just something i noticed. My actual question here is why it can take different lengths of time to acclimate depending on where they emerge? I like the idea and it adds a layer of realism that brings life to the world. Super cool stuff! Hope i didn't make a complete fool of myself cause I'm not a doctor but i enjoyed the article :)

Thanks for reading and I am glad you enjoyed it. I'm no doctor either, so no need to worry about that. :)   "I'm curious as to why they end up dehydrated?"   It's from constant vomiting, yeah. If you can't keep up with your expulsions from every end, and in the sun, it's not great.   "why it can take different lengths of time to acclimate depending on where they emerge?"   Some places are a bit less awful. Other places are high in Blight (radiation) or have extreme temperatures. Other places are just barren, dry wastelands but more on a "uncomfortable" scale rather than "immediately life-threatening". Kinda how you learn to swim better if you're not starting out in arctic waters and rough waves.   Thanks again for reading! <3

Ohhhhhhh every end....tasteful way of putting it and i missed it lol thanks for clarifying. My bad haha