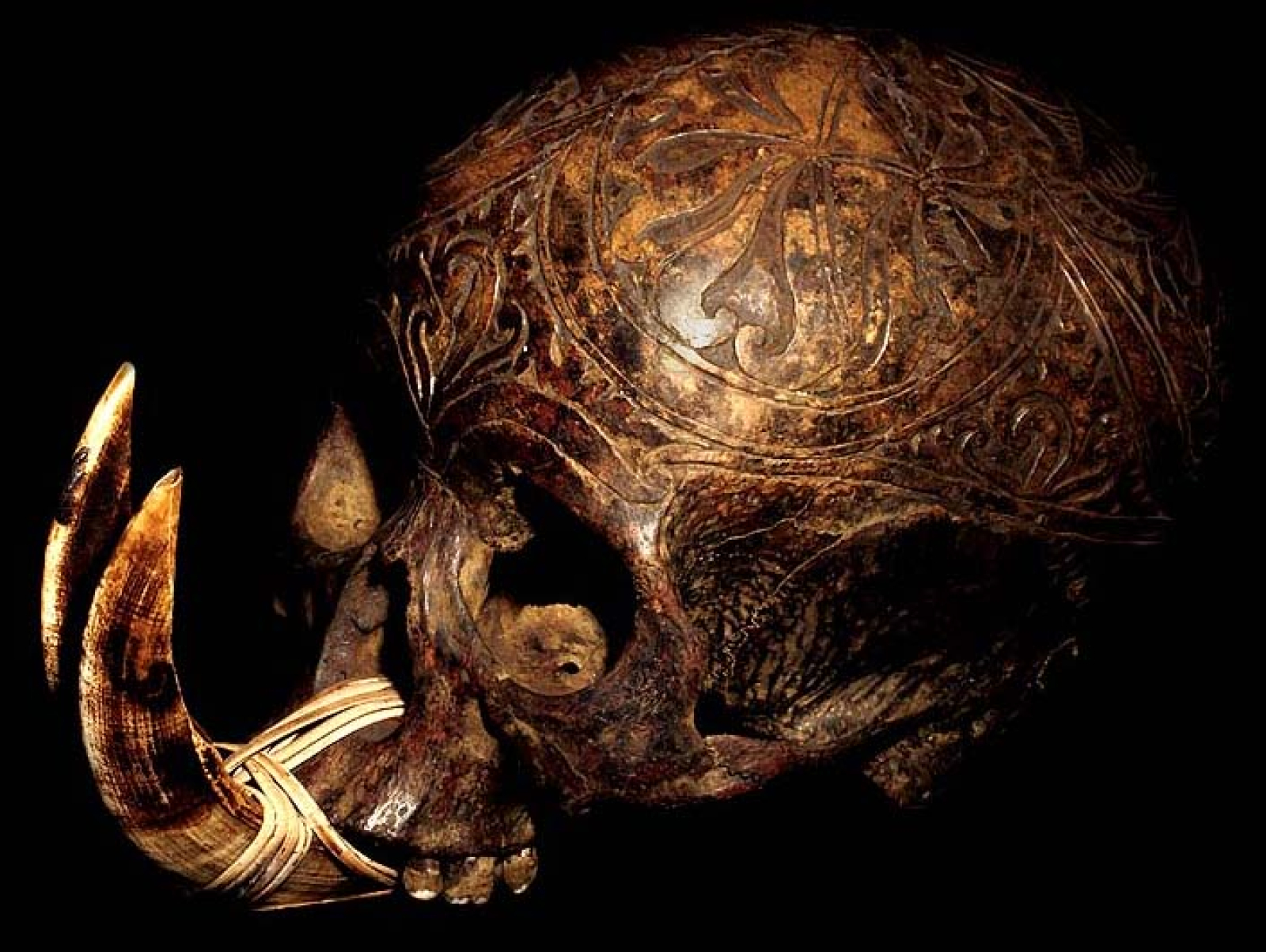 'To Honor the Dead'

First, remove the head. Leave the body for the pile.

Shikei is the wide-spread funeral practice of engraving and decorating skulls of the dead as a means to tell the tale of their lives for either good or ill; stories are carved into bone. Through this, the people of Araea venerate their dead or taunt their foes. Powerful ancestors are displayed with pride within homes or Shikei shrines, bristling with horns or tusks of wild monsters, decorated with beads or precious gems.   It is only the forgotten that leave a blank skull.

Speak For The Dead

Congratulations on second place.
— Carved into a warrior's skull

The Shikei carve stylized and elaborate hieroglyphs into the skull of the deceased, symbolizing the journey of their lives. Any event or triumph can be made one or several glyph, depending on its significance - and who has claimed the skull. as Shikei work on commission, embellishments are common and failures either forgotten or exaggerated. Besides the hieroglyphs, much of the Shikei's work is decorative, with intricate engravings spread across the skull.

Sometimes, the bone is cut of the skull entirely in the elaborate designs and some cultures light candles or incense inside the skull.

Actual writing on the skull is rare and tend to be only a few words or a phrase to explain some particular aspect of the story told or deliver one, final insult to the slain. 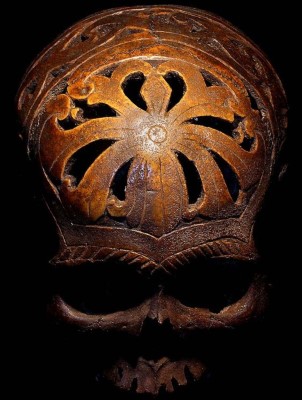 by http://www.tribalartasia.com/
In addition the engraving, Shikei will often decorate the skulls to emphasize some aspect of the dead. Horns, jaws or claws might be bound or glued to the skull of great warriors to tell of their strength, while others are adorned with beads, metal or even the tools they used in life. Other Shikei have mastered the use of fungal spores that soften the bone, allowing them to work it like clay.

For the wealthy and powerful, the Shikei add gemstone or precious metal directly to the bone. These are integrated into the design of the engravings and range in scale from rivets and studs, to plating most of the cranium in metal. The skulls of conquerors and merchant-kings can become worth more then their weight in gold after the Shikei have added horns, precious metals and stones.

Adding metal or gems is only done to flaunt wealth, with no practical or spiritual significance. If there is nothing else to say, at least the deceased can brag about their fortune.   It is common to say, "that one will leave a pretty skull" and it is seldom meant as a compliment.

If the dead have lead an especially illustrious and eventful life, the Shikei sometimes use bones to engrave additional details on. These bone-scrolls become critical parts of the shrines, without which the skull's work is incomplete. Even teeth are sometimes used.   Some long lost bone-scrolls of famous dead are sought after by many, hoping to uncover secrets or buried treasure.

The process of the Shikei begins when the corpse is first moved to the Shikei's workshop. The head is severed and the body is either buried in a mushroom grove or sold to bug-ranchers as food. The head is set into a pit filled with flesh-eating beetles and the remaining scraps of meat is carefully scraped off. Should the skull be damaged or deformed, the Shikei will attempt to file it down or patch it over. When the head is completely bare, it is is dried and cleaned before the second stage begins.   The Shikei use knives of steel or obsidian, but if the deceased was particularly poor, the Shikei will settle for painting the skull instead. Once the carving is complete and all adornment done, the skull is returned to whoever paid for the work. 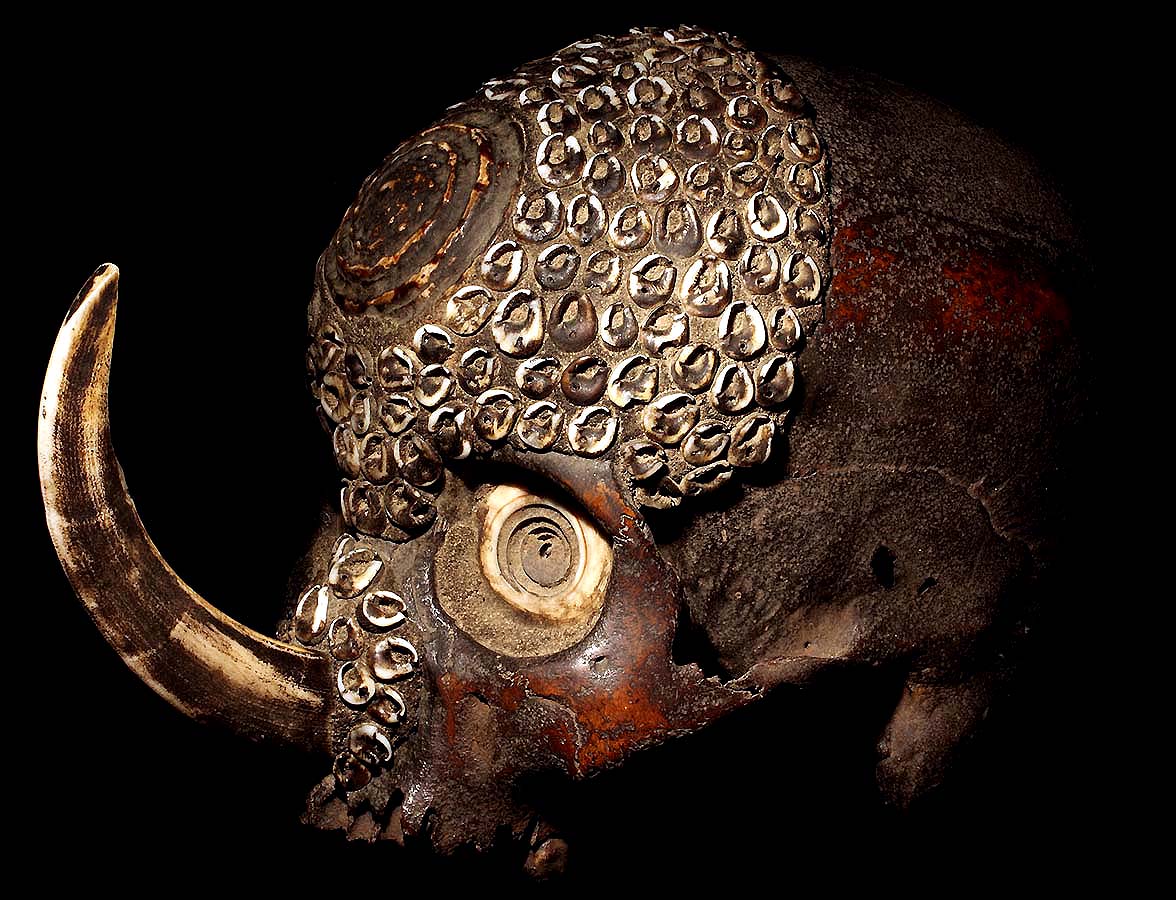 The skulls of deceased family members are often kept in the home, either in small shrines or encased into the walls or beneath the floor. The wealthy might have entire rooms set aside to display and honor their dead, though most make do with more simple means. Friend or foe, the dead are almost always put on display. Those who hide their ancestral dead are viewed with suspicion in many parts of Araea; what are they trying to hide?   It is not uncommon for the skulls of favored ancestors to be included in family events such as marriage or dinners. For others, the dead are displayed to speak of their own power. In Dhanû, the number of skulls claimed in combat is tied to personal prestige and glory. Those without at least one skull to display are seen as children or unproven.

Between some rivals, death is only the beginning. Some cultures hold that the soul of the dead can be kept within their skull, if the proper rituals are observed and maintained. 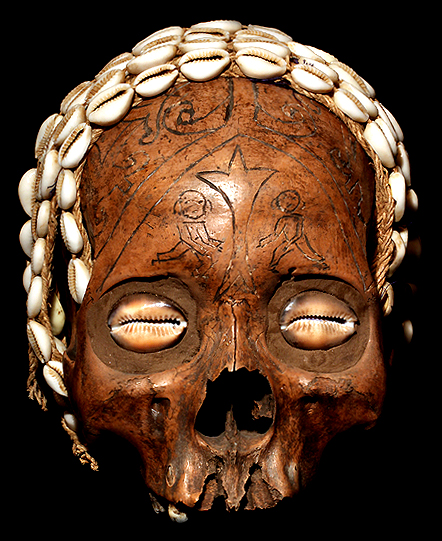 Shikei is both the name of the art and those who practice it. They are a respected cast of funeral-artisans who combine aspects of priest, mortician and artist.   Their work range from the practical such as disposing the body to the nearest mushroom compost to the work of stripping and treating the skull, with most of the heavy or unpleasant work done by apprentices.   They are part of every step of the funeral and the best of them can demand a high price for their work. 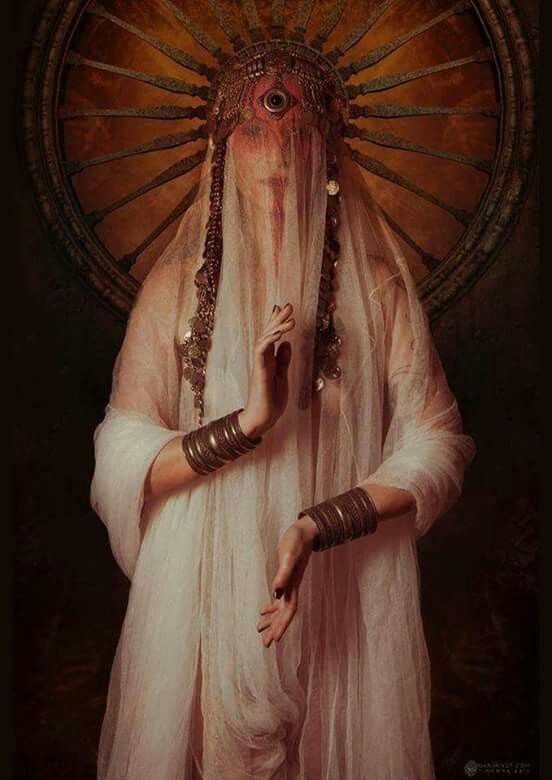 During war, armies collect the heads of the dead for counting and identification. Assignment to such a duty is usually a punishment, though marching armies sometimes employ low-ranking Shikei to lead the count and process the heads.   Other Shikei derisively refer to them as hack-jobs for the heavy cleavers they use.

In wake of disaster when there are too many dead, the normal rituals of Shikei are set aside in favor of expediency.   These skulls get the most simple of engravings and are set into communal temples where the skulls and bones of the dead are used to create imposing shrines. 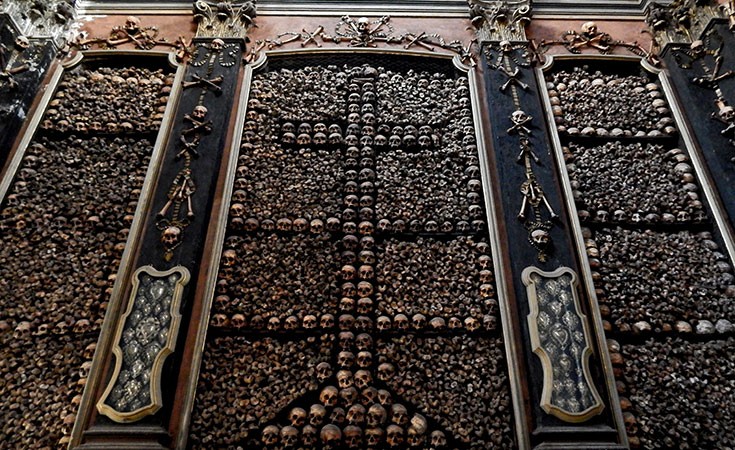 
The work of the Shikei can make grave-robbing a very profitable venture. Gems can be pried out of eye-sockets and gold-plating smashed loose.   Others sell the skulls whole to collectors who treasure both the artistry of famed Shikei masters and the legacy of the skull itself. 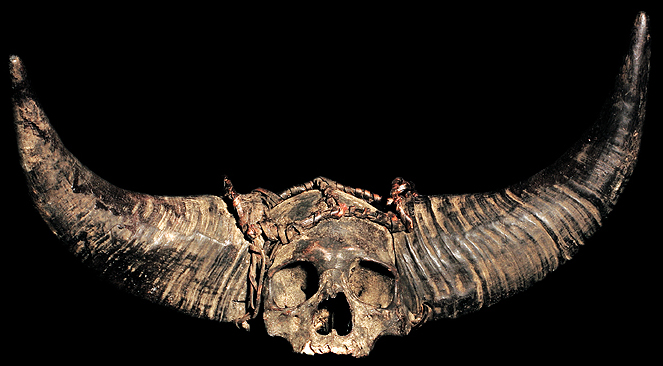 It is said that those who dabble in Thaumaturgy are cursed and their bones unwilling to sleep.   If care is not taken to dispel the wickedness with the proper (and expensive) Shikei rituals, it is believed the skull will return to haunt the living and drink their blood while they sleep.

Well this one looks good, I've given you some feedback in its current form, but let me know if you rewrite it.

Thank you, your proof-reading is a life-saver. :)

What a foreign tradition... severed heads, flesh-eating bugs and even cannibalism. The images really add to it. Great article!

It's based on some super-interesting real life things, some of them very modern. Modern skull-museums (which apparently is a thing) use flesh-eating bugs, for example. Learned that from watching Dirty Jobs. :)   Thank you! I'm glad you enjoyed it!

Grimly beautiful, the ideas behind this article are gorgeous. It leaves me with a few questions though, first being whether there is any significance to what is done to the skull, does one pattern or bone addition mean something else than another pattern or metal adornment? I also think it might be a good idea to place the cultural reasons of why one's skull is decorated in its own section rather than being interlacing it with the "Damn The Dead" section. It took me a few readings to grasp why they would do this in the first place, and I'm still unsure whether I fully understand.. Correct me if I'm wrong, but is it to set the souls free (as Damn The Dead stated that conquers would trap the souls) and to give the dead more significance in the afterlife?

Hey! First of all, thanks for some great feedback!   Those kinds of questions are great for figuring out what's missing from the article! Thanks! :D   To answer them, I added an entire section about the why's, in the "Purpose And Meaning". I kept the Damn the Dead side panel, but I moved it down so it aligns with that sections, so all information is in one place. Is that better? :)   In lieu of answering your question directly, I'll see if the updated article does that! :D

That does indeed answer my questions, and with flair to boot. I really like the saying in the quote, an insult in the guise of a compliment. And I'm glad I could help!

Wow! This is grim in the best way possible, the images you've used fit the article perfectly. How did this unusual practice become popular?

Long story short; there's not much space to store corpses and not really any soil to bury them in graveyard, so they got creative. :)   I'll see about adding a History section to the article! Thanks for the comment!

This article is such a beautiful detail that fits the grimness and harshness of Araea so well. I thoroughly enjoyed reading it. I think my favorite section was the "Damn the Dead" one because it shed a little light on the beliefs that underlie this tradition in the first place. That might be something to try to explore in the bulk of the text, specifically about whether or not it is believed that Shikei is necessary to allow the soul to pass on. Fascinating, horrifying, and thought-provoking as ever, Q!

Thank you so much :D