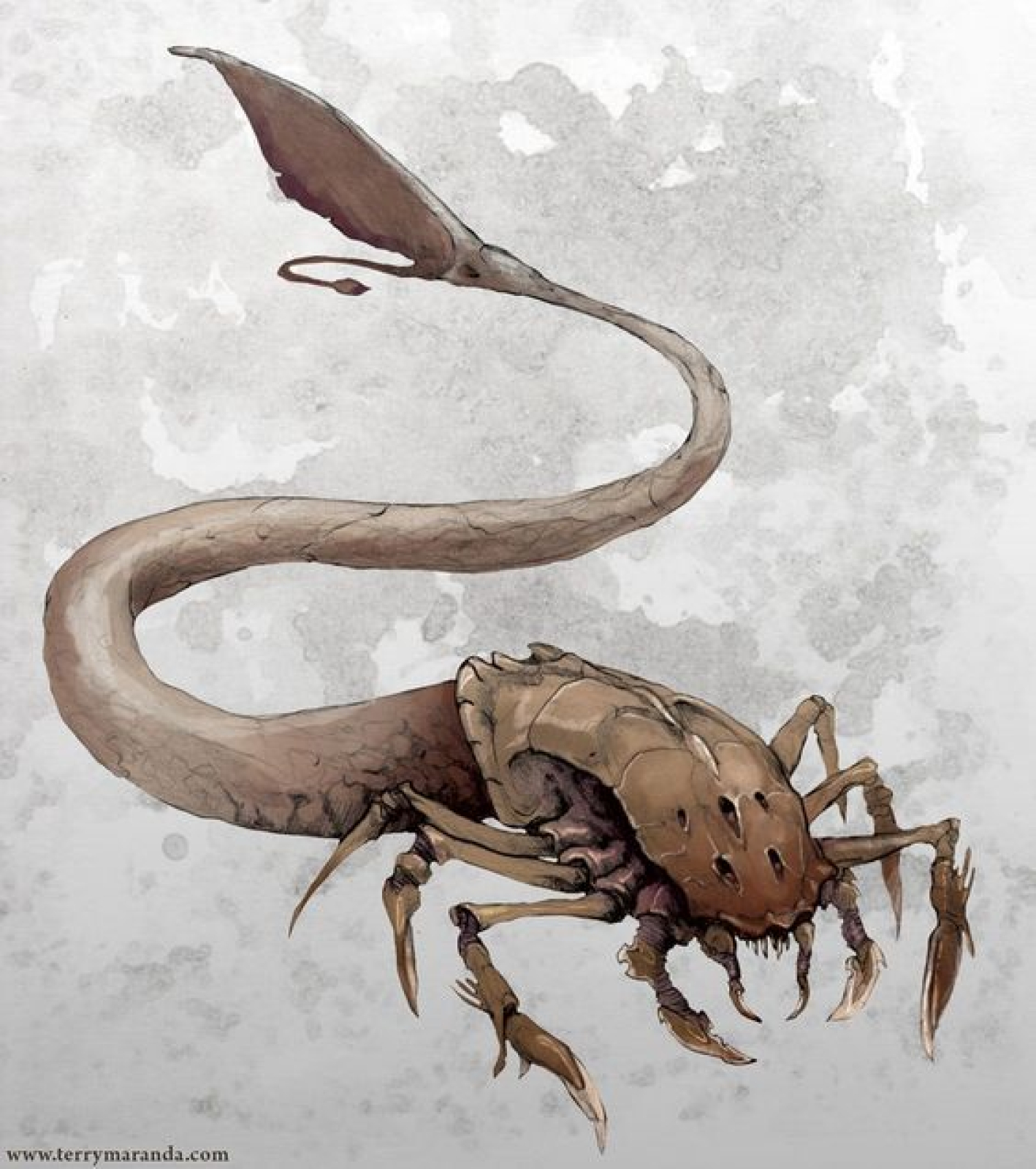 Meteorite Ticks are alien beasts that come to Araea riding on meteorites that fall during the seasons of storms. They haunt the areas of the world where such impacts are common, feasting on meteoric iron and any other metals they can find. They are not particularly picky if such metal being worn or not.

Covered in a mix of a shell of a crab and carapace of a beetle, the Ticks are long but small things with a powerful, fleshy tail that protrudes from its armored half. They have a multitude of clawed legs, ranging from six legs to as many as twice that, and several pincher-ended arms it uses to hold food or shovel it into its circular, fanged maw. When threatened, it can pull its tail all the way into its shell and use it as a spring to launch itself at both predator and prey. While the largest seen has been about the length of a man from tail to head, most are about half that size.   The shell of the a tick is a sickly sand-like color, with the flesh and claws a lighter hue of the same. The ticks have no visible eyes, only a handful of slits along the front of the shell located above the maw. 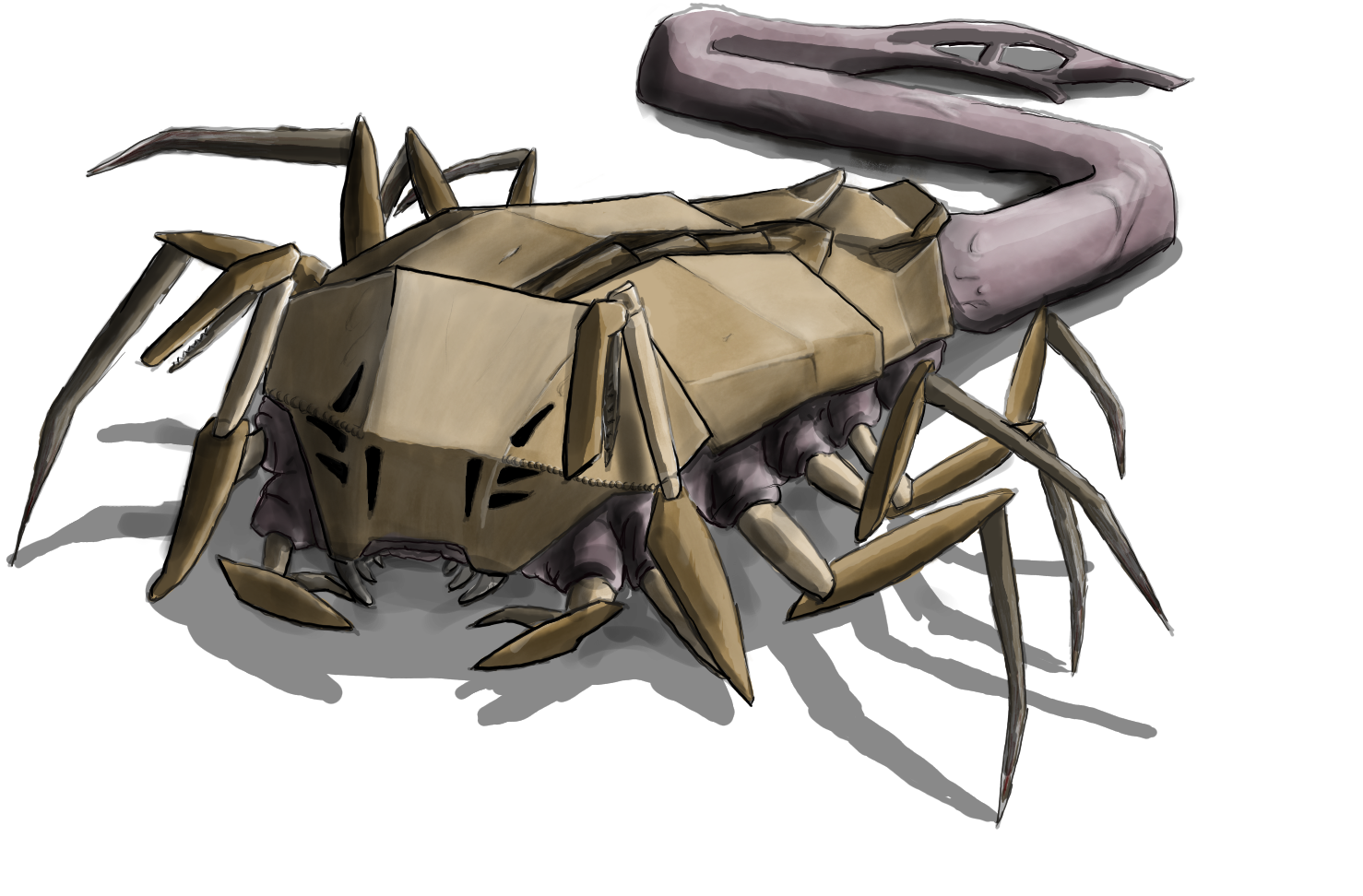 by Stormbril
The Ticks do not seem bothered by many things that would cripple a human, demonstrating no need to hide from either scorching sun or Blight. When sleeping, or dormant, they curl up into a ball and can from a distance be mistaken from rocks.

Where ever they come from must teach very poor manners.
— Sencha, Blight-Tracker

Meteorite Ticks are highly aggressive critters that have shown no trouble attacking even armed and armored humans when provoked. They are fast and vicious predator, chasing down their prey to tear at them with their powerful claws until they expire. Unlike many animals, they seem to kill prey even without feeding.

Meteorite ticks are almost completely silent, making no form of noise even when grievously injured. The only sound they make is clicking their claws together.

Some form of social structure has been observed, with the largest tick controlling the pack beneath it. If Ticks from different pack meet, it ends in battle until one of them either submits to the other or is killed and its shell eaten, with the flesh left to rot into a purplish gas. The pack structure is loose, with the Ticks all remaining in the general area and congregating on occasion, but just as often they will hunt alone.

by Rock Cafe.info
While they have stayed out of human settlements so far and made no attempts to enter them, people have claimed to see them try to devour the metal carried by their victims while ignoring the flesh.

Almost nothing is known about the life of the Meteorite Tick, outside their way of reaching the world of Araea. They don't seem to age (or at least it has never been observed) and seem to eat metal and ores more then meat and blood. There are those that claim the Tick is merely the larval form of another being, a hunter from the stars. Accounts are rare, but they speak of a creature that stand as tall as a man and a maw large enough to bite the head from the shoulders. 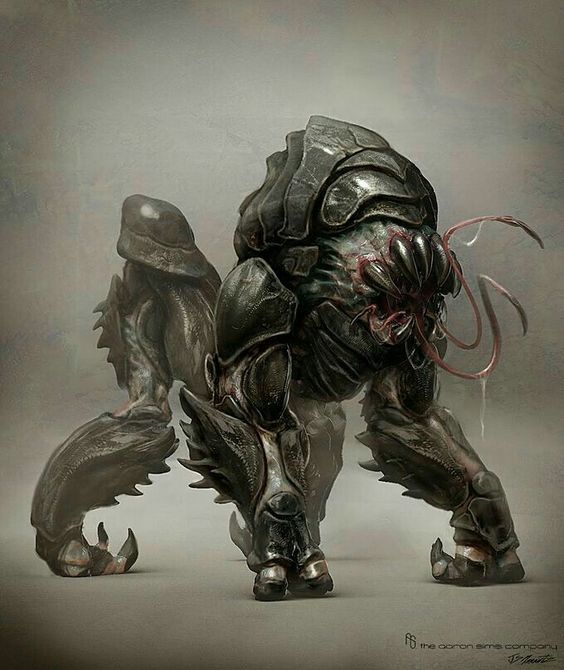 Most hope the tick is as bad as it gets.

by Rock Cafe.info
Meteorite Ticks are rare to find, most commonly found during the Season of storm when more meteorites then normal crash into the world. To the practical-minded Araean, the Ticks are less a cosmic mystery to be solved and more an dangerous pest that maul or kill the occasional prospector or Star-Chaser and eat ore that could otherwise be smelted to ingots.   On occasion, settlements troubled will do their best to exterminate or drive the ticks away from their immediate surrounding. In other times, the ticks will be specifically hunted for their tough shells for use in armor, being particularly valued for their seeming inability to catch fire or lead heat.   To most, they are just one more danger among many of the Surface

In desperate times, even the alien flesh from beyond the star can make it into the pots and over the fires. This has proven a poor choice and those who have tasted the flesh of the Meteorite Ticks have suffered from unusual new diseases, sometimes leading to death. In at least one instance, such a communal meal lead to the end of an entire surface village.   By those who survived, the meat has been described to have a taste similar to burnt soup, with a fatty, slightly chewy texture.

Some ticks have been captured, kept for study or simply for bragging rights. The creatures lose none of their viciousness in captivity and will maul any careless wardens.   Cutting off the end of the tail does much to incapacitate the beasts, if one can immobilize them long enough to do so. Most hunters of the Surface are happy enough with a trophy, leaving the capture of the beasts to those very few willing to risk it. 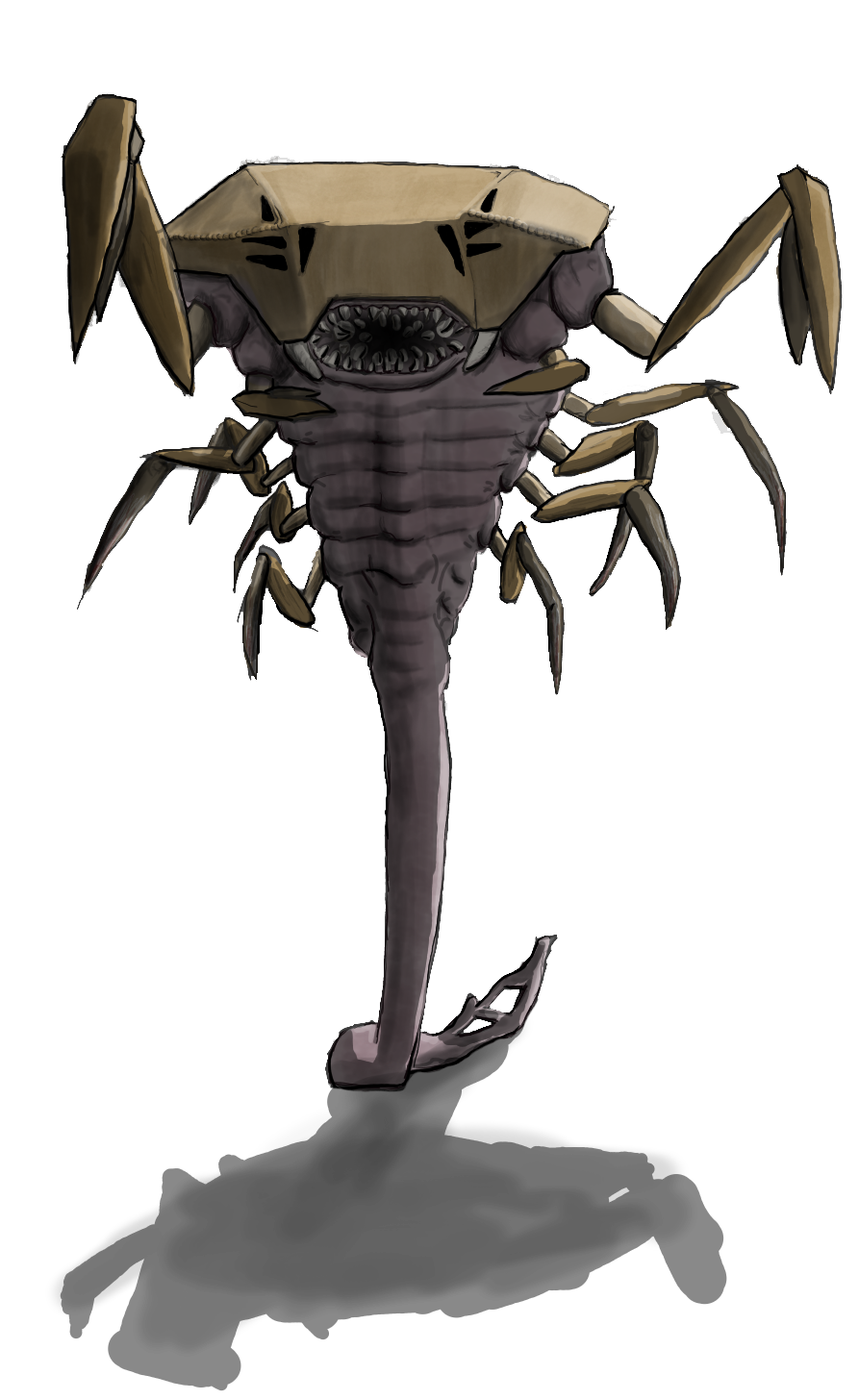 "Where ever they come from must teach very poor manners" lol. I think from now on I'll read your articles just for you quotes :P   Those look quote terrifying if you ask me, and you want to know if I would have one as a pet? Do people in this world really keep human-sized monsters as pets?   Jokes aside, they do look terrifying, both from your descriptions and from the "unconfirmed picture". However, I got the feeling that they are "just animals". Terrifying animals, but not just "placeholder monsters", so good job again!   I know you asked if we were missing something in this article but... uuh... I'm afraid I'm not missing anything ^^ See you around!

Haha, I'm glad you are enjoying the quotes. And I'm glad they sound like animals, that's more or less what they are. Alien animals! :D   And some do keep them, but they make very poor pets... :D   Thanks! <3

I enjoyed this. A creepy idea, really, and it gives me some flashbacks to Dragonriders of Pern and its aliens from the sky. The quotes were great, the prose sharp, and the concept fun and interesting.   How long have meteorite ticks been known about? Who found the first one? Have they plagued the people of the world forever, or are they a recent development?   One thought is using the sidebar for some at a glance info. Size, habitat, food, danger rating, whatever your people might consider important about them. Do they have any other names among your people?

Thank you! <3   I'm not familiar with the sky-aliens from Pern. But now I'm really curious!   I imagine the ticks have been around in some number ever since the planet has been bombarded with meteorites; pretty much since forever. But a lot of them probably get gobbled up by even *worse* things that live on the Surface.   I'll consider that and try to figure out what I want to add on the sidepanels in general for the species templates. My philosophy so far has been to keep things vague-ish; if you see one of these scuttling about, you'll probably go "about dog-sized" instead of specifics. But there's something to be said for omniscient author information, too. I'll have to think about it; thank you for kickstarting that process! <3

Cute! I want one! The amount of detail is phenomenal and they fit that 'creepy alien bug' vibe perfectly. My only real suggestion is increasing the brightness of the text a smidge, apart from that, good job!

Thanks! <3   I'll poke around with the text some.. Probably after WE, haha :D

Very impressive as is the norm with you. I didn't know that you had aliens in your world as well! Are they perhaps related to the evil beings that push the dimensional boundries of your worlds magic? Poor humanity seems trapped at all sides of with hard to understand threats.   I am curious if you could find a way to explain how a creature actually can digest and metabolize metal. Sounds like something that the humans of Araea wouldn't have time to try and understand, but it might be interesting if you could give some science. Also do they excrete anything useful? Any byproducts that might warrant someone capturing them?

Thanks Barron <3   They are unrelated to spirits but are somewhat related to the Q'x (stay tuned for that!): the people of Araea are just getting boned every which way.   I try to keep the article on the level of the people who live in the setting, so I'll probably keep it vague ("they seem to eat metal, the bastards") but the excrete is an interesting question. I'm not sure! So far, I thought it might just go into their shell, which is why it is so tough.   But worth thinking about! Thank you for coming to the article! :D

Rather than post anything helpful, I will say only this: ahem, story for Pete the placeholder bug! We want Pete! As you were :)

I love the idea that the tick may be just a juvenile. How creepy is that thought?   Stormbril's art really brings these to life and let's your words shine. I hope to never meet these guys.

Another nasty critter! Great article and art from Stormbril :D   And you answered the important question, what do they taste and can we have one as a pet XD   Only thing I was unsure was the size, since you said they're small but didn't give precision and this is Araea, so I imagined something enormous anyway XD Only realised my mistake at the end when you said there could be an adult form that is the size of a human.

I usually don't do specifics by choice, kinda to preserve a sense of menace and mystery. The more you know about them the less they become, in a way! That's the philosophy for Araea (and Shedim) anyway :D   And it's hard to say 'wolf-sized' when Araea has neither wolf nor dogs, so I'm still figuring it out! XD   Thank you for reading :D