"An anomaly. Unnatural. Repulsive. Do not let yourself stray too far from the path of Balance. The Void is not something you should play with."
— Ailill, the Druid


The concept of the "Void" is largely unknown to the common folk, and even to most scholars as well. At first, it was conceived just as an idea to name the lack of actual magic, but the Void goes beyond that. Indeed, it isn't "something", but the "lack of anything", a concept opposite to the idea of Balance, the Aether, and Magic, what is left when an element breaks out of the cycle and withers, eventually bringing the whole chain apart.

The event of "going void" or "voiding" is when an element is treated unduly, denied, or avoided, to the point it weakens and ceases to exist. This often happens by the over-focusing on either of the Light or Dark elements, which weakens and breaks the other ones down. When the first element falls, it is a matter of time before the whole cycle falls too, if the issue is left unattended, and the person becomes hollow.

Void is not an element, it is the opposite of aether, so there so no such thing as "Void magic". That said, through the use of Rune Magic, it is possible to artificially prevent the flow of magic, nulling its effect even when an element is present in the surroundings. In practice, this works as a sort of Void magic, that renders any and all magic useless. The Envoys of Tiamat of the Artalgnian Empire use runes this way to hunt and smite magic-users, as the Empire deems them to be heretics. 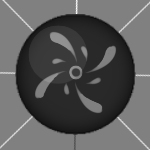 "Official" icon for the Void used by Wizards