All of us live with a demon inside. Some feed it, nuture it and then let it loose. Others repress it, starve it and confine it. Étharié, well, she was not of the second sort.
— Menelaus Menel, former first seat of Solaris Conclave

The world's inertia prevents it to ever change by itself. I wanted to change it so I did what I had to. I gained power. I obtained followers I even sold my soul to a demon.
I bled many times, I failed even more, but each time I stood back up I fought back and I changed the world. I owned it.
— Étharié Menel, Corruptress of the Dark cult

Étharié Menel was a High born Ereldar. She was known as one of the most beautiful women in the whole city of Solaris. One glance at her purple eyes could bewitch the proudest of the High born men, her bright red lips, soft as cotton, was the dream of many, her skin, the whitest of all the High born ladies, was described as silk smooth by her governess, and finally, her hair, translucent, which was kept short despise her high rank was adding a rebellious touch to that goddess of beauty, that magnificent doll that every High-born, middle-born or ground-born in the city wished to wed.
But beauty was not her only gift as she was also blessed with a magic potential surpassing the third seat of Solaris' Conclave, Menelaus Menel her uncle, to whom she was promised but yet to be married.

After the discovery of the ancient Eldar ruins and their explorations by Menelaus, Étharié found herself linked to the first demonic artifact ever found, Xérulath. Helped by the third seat of the Solaris Conclave Kanealoth, she slowly built the Dark cult, a secret organization using a demonic magic called Witchcraft and whose goal was to destroy the current ereldar society and their government the Conclave.

As the organization size grew, Étharié changed, the corruption of the demonic artifact spread in her mind altering her psyche. She became paranoid, megalomaniac and agressive. The Dark cult was finally discovered by the Conclave who decided to create a special police called 'Ithael' whose only goal was to hunt down the cultists and forbid the usage of Witchcraft. A civil war started in Solaris city bewteen cultists and Ithael agents. Menelaus, helped with his students (known later as the Nine), had discovered and learned Theurgy, a sacred magic that could block Witchcraft. He unmasked Kaneathos the traitor who was executed. Using the newly acquired magic, Ithael and the Conclave had the upper hand in the war and the rebellion was bring to its heels.
After the disparition of the Dark cult from the streets, Ithael and the Nine continued to track all the remaining cultists. This grim era of tracking, denunciation and killing is known as the Witch Hunt.

Étharié and the survivors of the Dark cult went back Corsolath pyramid. Inside a secret chamber in the pyramid, they found a way to summon in this world Xérulath brethren, other demons.
Fifty cultists executed the ritual during the event of the Blood moon night and more demons were summoned into the world causing mayhem in Solaris and the neighboring ereldar cities.
Overrun by the demons Ithael and the Nine tried to defend the city but it was a massacre.
During the same night, Menelaus, his two best students and some Ithael agent raided Corsolath pyramid in the assumption that Étharié and Xérulath hide there. After the battle, Xérulath was back to her dagger form and was sealed by Menelaus who later died of his wound in Ithael headquarter.

Without Xérulath, the root of Witchcraft, Étharié decided to flee the city with her followers while Ithael agents were busy fighting of the demons. They travelled east and many cultists from neighboring cities joined them, making the fleeing looking like an exodus.
Ithael agents tracked them to kill them but Étharié succeeded in saving her followers.
As the cult was moving east and getting away from Xérulath, the corruption they were all under weakened and with it everyone power but Étharié's.
They understood that they had been manipulated by the demon living in the dagger and that their only course of action now was to create a new society very far from the ereldar to be sure they would not chase them.

The cult decided to rename themselves Daeloth, blessed by the moon in memory of the blood moon night that they had survived. Under the direction of Étharié, their leader, the continued to travel east and were raided by an orc tribe that captured some daeloth as slaves. Weakened by the exodus and their curse, only Étharié was still powerful enough to fight back, she went to the orc tribe village and crushed them without ceremony to free her brethren. They even enslaved some orcs to use as carriers.

Finally, their quest of a better land stopped and they set up in a rainforest very far east, surrounded by swamp. There, nobody would find them and they started to live in peace. Étharié was elected Queen of the Daeloth and started a society based on egalitarianism and meritocracy. Every one was equal at first, but only the more invested aquired privileges.

Generation after generation, century after century, even millenium passed and the daeloth grew and became a large civilization under Queen Étharié. She was the only one that seemed to not age since the corruption of Xérulath and as their queen she would stay in function until her death.
The society was now less egalitarian and more meritocratic. The privileged Daeloth were divided in houses, a similar concept to the families of the ereldar society. Everything was not based on magic potential but on any kind of power. It could be gold, military, influence, information, technology, magic or anything that could give a house an edge over its enemies.
The old threat of demons had been slowly forgotten and a new kind of Witchcraft had been instaured, summoning demons was made psosible but only lesser and minor demons could effectively be called in our world. Summoning larger demons was impossible but a new type of spells was devised, called pacts, it was a contract between a major or superior demon and a member of house, with this contract, the daeloth could modify his body temporary to acquire a part the power of the under contract demon. In exchange, the demonist would pay the demon a fragment of his life force.
Daeloth houses were related to major demons thus creating a rivalry between them. But Étharié was against it. She remembered perfectly the time of the corruption of the ereldar, the evil that was within them and what the Dark cult had done, what she had done. She was scared that her subjects were falling in the same path all over again.
Her own government was working against. She wanted to forbid pacts and connexion with demons. But her every move would be vetoed by the houses.
Thanks to the demons, the daeloth empire grew quickly but something was wrong.

One day during a council meeting, a young dealoth, leader of house Seifenoe publicly criticized her. He was young and bold but many other leader were behind him. Étharié felt that she was losing the power to guide her people, that they were once again manipulated by the demons.
Her latent paranoia that had appeared during her time corrupted by Xérulath came back. Fearing for her life, she disappeared from politics while still holding the title of Queen.
Many leaders tried to get an audience for them, each time, she refused.
Locked in her appartments she waited until the day she would be killed, it was sooner than she expected.
The young leader of Seifenoe, Ehar, followed by the other house leaders bursted in the private appartments of Étharié. Their goal was to have her abdicate or be killed. She did not accept their demands.
After a particulary long and difficult fight, Étharié was vanquished. While she was still alive, the house leaders create a demonic portal and send her to Hell, the demons domain where she was eaten alive.

Legends say that the Queen's emotions were so strong and vivid while she was eaten alive that some pieces were incorporated to the demons psyche. Like a reminiscence of her, those demons would be obsessed by her preoccupations at the moment of her death and could not get rid of those feelings.
Is it a result of her power? Of the corruption she once was a part of or a sort of curse? It is said that some demons in hell await to enter our world to kill all the descendants of the treacherous house leaders that betrayed her. 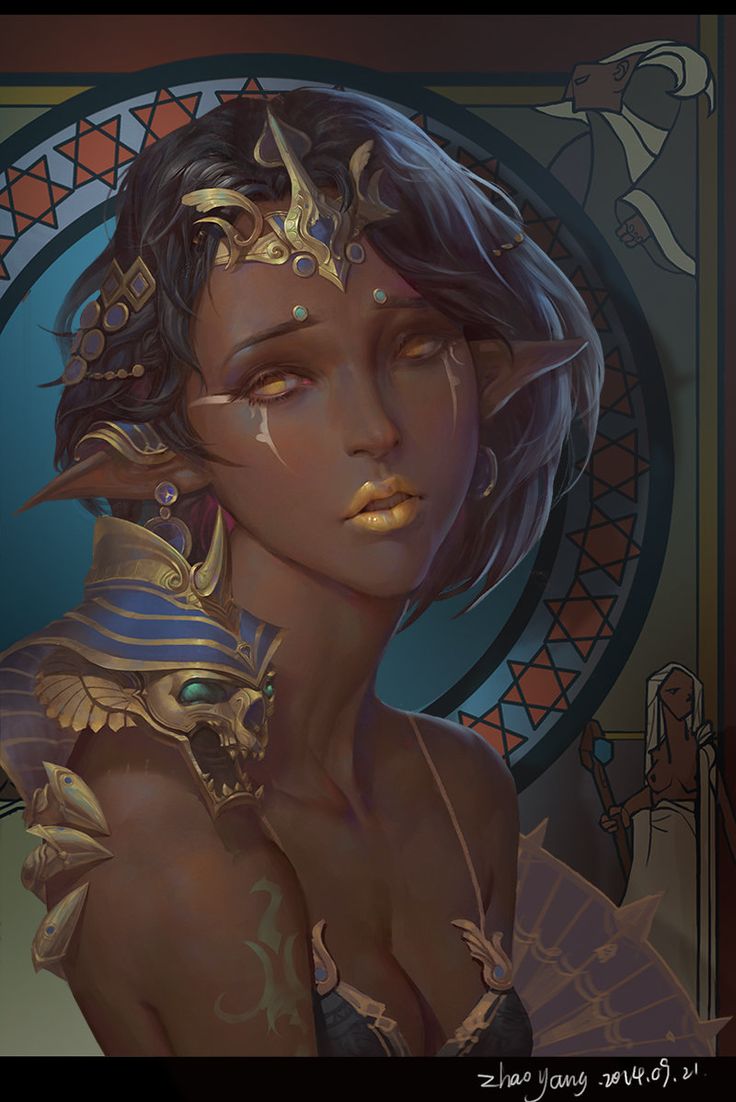 This was an interesting read for me with so many turn of events. My favorite parts of this article is the picture reference you use for her, the stylized quotes in the beginning, the growth of the Dealoth Empire, and Étharié's supernatural death. I was confused with some of the events in the beginning, but your timeline helped clear up some holes that left me wondering. One thing I'm still curious about is why did Étharié and Kanealoth build the dark cult following and what did they have against the Ereldar society to want to destroy it?

Thanks for comment! Basically everything they did was related to Xérulath. At first I was writting this romanced but it took too much time so I chose to modify the content to reflect more a wiki page than a novel, still there will be a "novel" type article better explaining all the events surrounding Xérulath soon :) Also if you are interested to read more about it, I invite you to read the article Menelaus and Xérulath which covers the events which happened inside Corsolath pyramid   cheers

Actually the novel article is a lot more immersive :)

Very fun read, I love the picture reference and the closing of her life. She really felt believable in how she came to power and how she fell from it.   A fitting end for sure. Though I would have loved to hear more of her legacy and how the city was permanently altered by her rule.

Another great article. Good cover image choice for sure. Content is great as well. I think the Daeloth Empire section could benefit from some paragraphing. It's a bit "wall of text" compared to the other sections.

Interesting article. One thing that slightly confused me was you reference her having white skin but used a picture with a different skin tone. Maybe I missed it, did her corruption change her appearance to?

Yes! Good catch, I'm currently writting the story and it is explained in it, I just didn't had enough time to put it here :)

What a great plot! I really enjoyed this article, particularly the events displayed in the timeline. The choice of images and quotes made it visually engaging. Fantastic ending paragraph!

Arka, i've never known you to come up with a boring article, your talent is boundless. Absolutely well done.

The more I read into Citadel, the more I fall in love with the world. This is such a great article, the story is vivid and the betrayal heartwrenching. An excellent article.