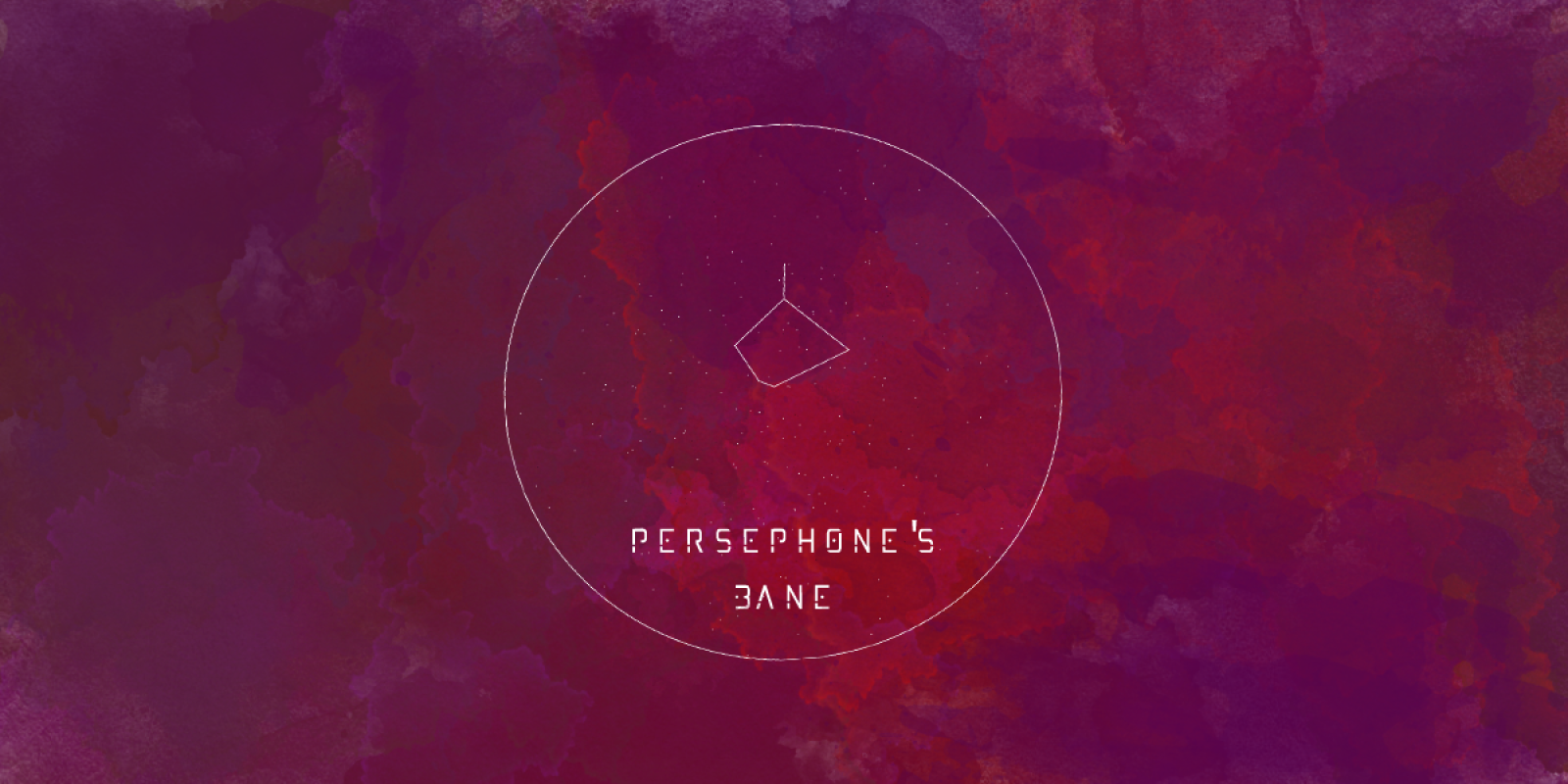 News from the underworld...

Styx entered the ship, rubbing at the rings of red wrapped around his wrist. Why did the cuffs have to be so tight? He was tall, lean, and without a single hair on his head save for his dark brown beard. He surveyed the cargo hold with steely blue eyes. The vessel was just as he left it.
He meandered down a corridor with half painted walls, a mix of varied hues of red, orange and purple. He picked up several palettes and noticed the dried paint. He tossed them into the trash, such a shame they were interrupted. Paint could be replaced, though.

He entered the studio, the walls painted a deep red. Black curtains draped from the ceilings, shrouding the equipment scattered about the room. Styx paused before sitting in his chair. He found himself admiring the mural of a pomegranate painted on the far wall. He took a deep breath, and let it out in a sigh of relief. It was good to be home.

He sat down and pressed a button next to a speaker on the wall. “Allright, love. Take us up. It’s time to get loud.”

The ship sprang to life. He could feel himself being pushed down into his chair as the ship gently floated to the sky. It soared above the dense turquoise clouds. Styx smiled as he set everything up, pausing for another deep breath before beginning the broadcast.

“Good morning. I know. I can hear you now. 'What is that I hear? Could it be? Styx, is that you?' Eyes to the sky, wanderers. It's me. God damn it's good to be back. Did you miss me? Were you lonely? Me too. I just got out of the metal box they called a prison, and let me tell you: I am pissed.”


The Pulse? Of course, I know of it. I helped in its creation. In many ways, the pulse was my first true act of rebellion against those who would hide the truth, that of Earth and our frightful position in this universe. I am bound to The Archives, but I am the keeper of truth. To hide it is an affront to my very existence as The Archivist of Safeharbor.   The truth is a weapon; my weapon. I sought to aim it where it would be most helpful. A single team of Wayfarers approached me. They had a mind to dismantle the web of lies, one thread at a time. There are many secrets hidden by those in high places, and such status makes men mighty.   I leveled the playing field. The pulse was born, a broadcast capable of reaching out to most of Sepia's distant stars. Allow me to indulge you. It's quite a tale, if I do say so myself.

What is The Pulse

The Pulse is a broadcast used almost exclusively by wayfarers and their supporters. They use technology scavenged from ships in the void. They receive their data from other wayfarers, informants who shared sympathy for their cause, and most often, from myself.   The nature of their broadcast varies. More often than not, they simply bring news from outside Safeharbor to those who care. On occasion, they reveal the secrets I discover. They also work as a balance to Safeharbor's government, calling out the earthborn when something isn't quite right. This stems from their earliest history, back when they often called on their viewers to embrace what was forbidden and break the rules.   The Pulse is a means for those on Safeharbor to connect with the wayfarers in the void. By constantly listening in, one can follow their voyages in the black. They can share in their triumphs and their heartbreak. Even the earthborn listen for news of their children's exploits and to know if they are still alive. The names of the dead are always given during the broadcast.

Myths from earth carried on well after its fall. While most were lost in the archives, the myth of Persephone was told and retold over the years. Persephone captivated the young wayfarers so much, they immortalized her in the stars.   Persephone's Bane is a constellation in Safeharbor's Navigational Zodiac, taking the form of a pomegranate. The Wayfarers were inspired by Persephone's routine trips to the underworld and eventual return, which they saw mimicked their own travels from Safeharbor to the stars. The first wayfarer vessel was named The SVN Persephone for this reason, and is where The Pulse operates from.   The ship became a standard among frigate designs, thereafter. The Persephone class frigate is the pride of our Navy, and it all began here. The SVN Persephone was the basis for all wayfarer vessels. Its design remains unique in that it allows a wide range of modification, capable of being fitted with alien technology in ways most human vessels can't.

The Crew of The Persephone

the crew consists of 4 members. Each is a wayfarer, though the eldest have retired in order to focus on the broadcast.   The first and arguably the Captain of the vessel, is Alan "Styx" Price. He is the voice of the broadcast, and organizes the entire program. His wife, Breanna "Lethe" Price, does much of the research and information acquisition for the broadcast when not teaching potential wayfarers at Dawn   The two are accompanied by wayfarers Hera "Pearl" Price, and Garth "Blaze" Price, their children. These two are meant to take over the broadcast, and can be heard from time to time when Styx and Lethe are occupied.

I helped establish a safe and secure base of operation for these youths. I taught them how to use the technology they discovered, and gave them more than enough information. For a time, those in power turned a blind eye. They even praised the wayfarers for using their rights of free speech.   Then they started getting comfortable. The wayfarers started getting angry at some of the things they found, the broadcast's rhetoric growing ever bolder. Local militias found them, nearly killed them to keep them silent.   This was something I would not allow. I felt personally responsible. They spent months in prison while the elders bickered about what to do with them. I made the decision for them. I did something I never thought I'd have to do. I left the archives.

I stormed to the council chambers of Autumn, demanded they be released and allowed to continue their work. These wayfarers were young, undefended by those who once sympathized. Sadly, there wasn't much of a defense to be made in the first place.   They were guilty of their crimes, after all. They broke confidentiality, sowed dissent, and refused to work with Safeharbor's leadership. My demands fell on deaf ears. I was denied.   Then, I threatened to erase every data vault in the archive. They took exception to that. They always do, though this time I may have put together a falsified alert indicating the purge was well under way. In hindsight, that may have been too much on my part.


The battle of the pillars

When released, they took their ship, the SVN Persephone, and set up their broadcast aboard the vessel, itself. The ship fled beneath the dense, chlorine rich atmosphere of D'artagnan. To this day, they only come up from the surface to resupply, and send out their broadcast. This was how it would be until the Siliue attacked. The Battle of The Pillars and The First War was their time to shine.   As our fleet grew, wayfarers would often sit in the skies of D'artagnan, sharing stories and information. We survived the war for so long due to the daring raids carried out by the wayfarers, something often omitted from the record. Persephone class vessels would rise from the clouds when enemy ships neared. They tore through a few ships, forced the enemy fleet to maneuver, and then fled back to D'artagnan.   They inspired a new generation who wished to share in the glory. The wayfarers served as a black-op organization for most of the war, and The Pulse was used to coordinate operations. When the war ended, they were loved by the people, heroes in their own right. They could continue without fear, and so they have to this day.
Sepia
Season 1: Us
The Safe Harbor protocols

CANT STOP THE SIGNAL, MAL! Dunno if that's the right reference, but firefly is the best. Lol thanks for the kind words. I'm glad you enjoyed it.

I feel like its been a while since I told you how much I loved this world. Even with something like an organisation, which I usually have less interests for, you manage to captivate me and make this feeling of nostalgia and wonder shine through, if that makes sense. Amazing work as always!

Dude thanks so much for the kind words. I love how much love this world is getting. I'm glad you enjoyed it!

This is great. I love the quote at the beginning, and the little bits of extra story we get about the Archivist here. :D

Oooo good. Thanks so much! I'm glad you enjoyed it!

Thank you for finding the best font ever!

I love the fonts so much! Thanks!

"Then, I threatened to erase every data vault in the archive. They took exception to that. They always do, though this time I may have put together a falsified alert indicating the purge was well under way. In hindsight, that may have been too much on my part."   That is the best part.

Agreed! Thanks. Im glad you enjoyed it

Another brilliant article! Keep up the wonderful work! I really need to check out this book of yours sometime.

This world is definitely a favorite of mine. Plan on writing some stories and stuff for it soon,

I love this world so much. The quote at the start drew me in strait away. And I like that we learn a bit more about the Archivist through this article.