Magical shopkeeper and self-reliant single parent.   The party first encountered Faelyn outside Silene while he was traveling to the city with his younger brother, Terestri. The met after the Angler encounter, and Faelyn offered them all a ride back to the city.   The party befriended him and kept in regular contact, until he revealed himself to be Didrangha, under the guise of a fey with malicious intent. This was an act made in an attempt to forcibly turn the party against him, as he was trapped in a deal to keep his child safe.

As a moon elf, Faelyn has powder blue skin with white freckles and hair. His eyes are silver with elliptical pupils.   As of the party's first journey to Emalora, he now bears long scars at the back of his shoulder. After the journey to the Storm Horns, he gained more scars, including burns, and lost two fingers. He now wears prosthetics.       For a description of his fey body, see Didrangha.

Due to unknown circumstances, Faelyn's magic does not function properly. It may deal him physical harm, causing necrotic damage, bleeding, and loss of consciousness. His need for sleep is apart of this disability, and exhaustion or simple off days can cause him to experience narcoleptic attacks. He has since received treatment for this condition, keeping his condition mostly stable when casting. However, he was still incapacitated by pain after several casts of the teleportation spell.

Two necklaces were once present on Faelyn's person:   One is a necklace that was meant to alert Dahlia in event of his demise. It is unknown if he still wears this after he revealed himself to be Didrangha. The other is an amulet that wards him against divination magic, which has been removed.

Faelyn's history was murky at best. He seemed to have trouble keeping track of time, but claimed he was about as old as Mila.   He appears not to have met his parents or had a traditional upbringing. By his own admission, he was in some form of slavery in the past.   At some point in the year 1569 or 1570, Faelyn arrived in the Mandehanwei Rainforest . He initially made the clam he found out that his parents were up to something and that he then took his younger brother, Terestri, into his custody and left. He later confessed that this was not true, and the two of hem were not even related.   Faelyn has stated that he and Terestri did not get along at first, but by the time they met The 7 Wonders they had a clear bond of trust.     Faelyn would later set up a magic items shop in Silene. His friend, Dahlia, joined him in the city as an employee. Since then, he continued to build bonds within the city, all of which have likely been abandoned.   Initially, Faelyn claimed the identity of Kindreth Dorren, an evocation professor at the university of Va Anore. Since revealing he was a fey, it can be concluded that Kindreth is dead, and Faelyn was using his form as a disguise.   Faelyn was forced into a contract in order to protect Terestri. Since then, he has been overtaken by an infection of ferrous cordyceps.

Previously owned the Cat's Configuration, where he would make most of its stock himself.   Currently working for the forces of evil.

Faelyn was apparently enslaved at one point in his life.   Bricaryn once trapped him in chains, where he would be held for several thousand years. As a result of this, and potentially previous trauma, being restrained can send him into a panic or a dissociative episode.   Faelyn was a victim of torture in the Storm Horns. After this, he was forced into a contract to keep his son safe. He would eventually be overcome by a cordyceps infection.

Faelyn is a well-studied individual. He appears to have an extensive understanding of magic, specializing in arcane casting but possessing some understanding of divine and natural casting as well.   An interest in planar magic has been made known, as he owns many books on the different planes of existence and the tower behind his house is just a series of branching demiplanes.   Faelyn is known to be an excellent actor and liar.

Faelyn's exact morality had been called into question in the past. He claimed a lack of remorse for killing early on, one that proved itself in the Storm Horns, when he intentionally trapped multiple people in a burning building and displayed no regret. He would later advocate for killing the cultist he'd captured — stating that at least the blood he could collect from that would be useful as apart of the components to summon Dahlia — displaying both a desire for vengeance and a view of murder as a pragmatic option.   Later he would lean into this lack of morality, displaying great amusement and enjoyment at the party's horror when he revealed his betrayal. However, this has been revealed as an act, and not a genuine reaction.

Information surrounding Faelyn's blood family is obscure. His claims regarding his childhood are as follows: How much of this information is true, a lie, a joke, or apart of the cover that he and Terestri were related, is unknown.

Allegedly, Faelyn met Terestri by coincidence. While hiding in the Mandehanwei rainforest, he heard Terestri crying, as Terra knew his parents intended to use him as a form of sacrifice. Against typical judgement, Faelyn halted to speak with him, and then decided to bring Terestri with him after killing his parents.

Faelyn and Dahlia were childhood friends. The exact details of this are not known, though they allegedly did not get along in the beginning. They are aware of each other's respective identities as a fey and a fiend.   Since then, two of them grew close, seeming to have a deep bond. It is possible this bond has been broken with Faelyn's betrayal.

Dahlia uses the name "Sati" instead of Faelyn. She also refers to him as "darling," while he may call her "dear." 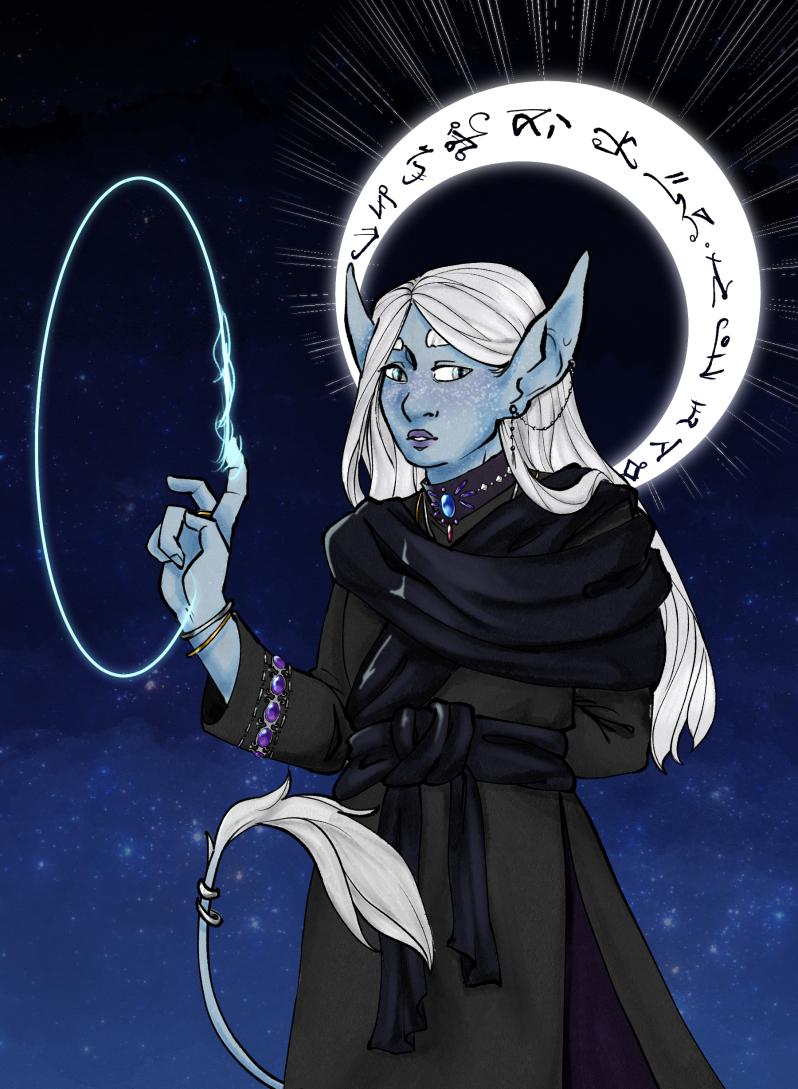 Remove these ads. Join the Worldbuilders Guild
Friends of the Party