The gentle, benevolent spirit of the Oseishin Ocean, comforting and caring to those all who travel the seas with respect

Each Ocean's got its own soul - any sailor worth 'is salt'll tell ya as much. The Liuwang's is cruel, capricious, and demanding; The far-off World's End Ocean's got the soul of a reaper, a killer to the core and alien as can be; The Aurora's got an icy, haughty pride to its soul; but the Oseishin's soul is a quiet thing. A silent thing. So much so that it took our ancestors thousands of years to even realize it had one - even after all the others'd been getting worship for millennia.   It's jus' the kinda lady she is, the Oseishin. She ain't like the Liuwang, the Aurora, or even the World's End Oceans - she's all water, as far as ye can see. No land nor civilization in sight for her, 'cept on her edges. She doesn't understand us - doesn't ask for tribute or destroy us. But make no mistake - we're sailing her waters.   So respect her. Give her the dignity the ol' quiet siren deserves, and ye'll be jus fine. And if ye see her, be sure to give her a greetin'.
— Bartholomew Roberts, better known as the infamous pirate "Bloody Bart"

Unfortunately, the myth of Shining Serah is not nearly as well-explored nor as well-detailed as that of her counterpart Drowning Damara - due to its very nature, the spirit of the Oseishin Ocean has seemingly shunned and avoided prolonged contact with civilization since their "creation" untold thousands of years ago. Because of this intense isolation which meant it was only uncovered barely a thousand years ago when the other oceanic spirits comparatively had already been worshipped for tens of thousands of years in one form or another, the only account of the myth of Shining Serah, spirit of the Oseishin Ocean, comes from the only eyewitness account to be noted down to date - and the record that first alerted the world to its existence: the poem anthology/short story titled Paradise by Ocean's Light by the ancient Tortle sailor Iakopo Galovao.   In this beautifully written but disjointed and somewhat hard to follow series of writings, the author describes signing on as a deckhand aboard the ancient vessel known as The Temptress under the command of a well-known captain, setting sail from the western coast of Zheng-Kitar with the aim of piercing the Noctum Veil(See the sidebard on The Yema for more details) and discovering new lands. However, not long after The Temptress had reached open waters it encountered a nasty storm and was torn asunder - with the writer Iakopo only surviving by clinging desperately to a piece of driftwood from the ship's hull as the rest of the vessel sank beneath the calm waters of the Oseishin Ocean as he watched on, helpless to save his crew from a grisly fate.   Drifting on the open waters of the ocean for days on end, it was just as he was approaching dehydration and starvation-induced delirium that the writer describes being spoken to by the waters of the ocean itself, who spoke with a quiet voice that sounded from all around him - so quiet and shy that a steady gale might blow it away altogether. This voice, delicate as it was, posed a question to Iakopo - "Do you hate these waters for bringing death to you, and your fellows? Do you lament the storm that tore your life asunder?" To him, it seemed almost afraid, or sad somehow - as if this voice feared his response. Still debating whether he was simply mad or hearing the true voice of some oceanic beast, the writer describes his response thusly:

Long did I ponder such a question - so long that I feared the voice may have left me, drifting in and out of consciousness as I was. However, I soon made up my mind that no, I couldn't find it in myself to blame the water or the storm. Does a man rage against the weather for flooding his house? No - he moves on. 'One cannot control nature', I said to the voice - 'those who think they can are naught but foolish. Ye cannot blame the wind for the fault of he who tries to capture it.'

The rest of the book describes the author's life being saved by a beautiful woman with 'the finest eastern silks' for clothes and a jellyfish hood connected to her head - 'a woman of quiet, fearful serenity the likes of which stole my breath away', to quote the author of the novel. Having been saved from his piece of driftwood by this woman, Iakopo describes a journey to the ocean floor where he was kept company and nursed back to health by the being who claimed to have no name yet described herself as 'the manifestation of this ocean and its raw spirit' - brought to a modest but unbelievably gorgeous ocean floor paradise of coral, bioluminscent lights, and a beautiful house in which they lived for what the author can only assume in hindsight to be the better part of nearly two decades(though at the time, he describes his life like a blur), living plainly with this quiet woman and telling her countless tales of the lands that dwelled at the edges of her domain - the tales of civilization and all its beauties.   Together, he lived with this ocean spirit for some time - even coming to name her Serah as their love flourished - but in time he came to possess a desire to return to the surface that he had left behind, despite the lamentations of the spirit herself who warned him that should he leave, they would never meet again.   After this, the story diverges - the final fate of the author varies between retellings, as the ending of the novel leaves off on a frustatingly vague ending which leaves it up to the reader whether the author returned to the surface or lived out the rest of his life beneath the waves with his underwater darling. In point of fact, the existence of this short novella and poem anthology inspired an entire generation of sailors to travel out onto the Oseishin Ocean in desperate search of Shining Serah, the quiet lady of the ocean, in the hopes of earning her favor that they might be spirited away to her ocean floor home.

The original "myth" of Shining Searah as described in the short novella Paradise by Ocean's Light is at least partially based in actual fact - as told by the book, the existence of a sailing vessel known as The Temptress has been confirmed, and the fact it sunk far into the oceanic waters of the Oseishin Ocean is true enough - but the existence of an Iakopo Galovao among the crew's roster has never been confirmed or disproven, making the story a delicious, enduring mystery to this very day.   The fact that there have been those who have claimed to have been the children of the author have surfaced over the years adds some credence to the myth's existence, but unfortunately there may never be a way to truly prove whether the book is fact or fiction.

The myth of Shining Serah is commonplace among all who sail the waters around the continent of Zheng-Kitar - not a soul alive exists who lives in or near the waters of the Oseishin Ocean that does not know the myth of the ocean's quiet, shy duchess who watches all who cross it for better or worse.

Over the years since the initial sighting that brought Shining Serah into the public eye, countless other minor sightings and re-tellings of the tale have given her an entire life of her own - telling variations of sightings that claim to have seen her floating atop the ocean's surface watching their vessels from afar, while other still claim to have encountered her and had their vessel nearly sunk or heavily damaged after one perceived offense or another.   All these variations, when combined, give Shining Serah a quiet and noble personality, wholly detached from the civilized world unlike her counterpart Drowning Damara - of a spirit who silently watches and waits, unable to fully understand civilization and perhaps even somewhat fearful of it, who is content to let those who sail her waters pass unmolested so long as they pay her waters the respect they deserve.

To the cultures along the western shores of Zheng-Kitar, Shining Serah is an enormous fact of their lives - especially the Dharan, Qushani, and Ustanan peoples, who view her as a folk deity of sorts that they must remain eternally respectful of, lest her wrath be visited upon those who sail her deeper waters. To these coastal cultures, they almost view her as a distant foreigner with no understanding of their culture - unlike the "tribute" offered to Drowning Damara that often includes wealth of some kind, those who know of and live alongside the myths of Shining Serah see more value in giving her gifts that might help the quiet, shy duchess learn more about the peoples that dwell at the edges of her waters - of the civilizations she does not understand.   To a lesser degree, she is almost seen as a patron saint of the arts by those in Ustanan society - a beautiful, isolated duchess who supports creative endeavors done in her name, that she might better learn of the world of men that she watches from afar.

There are a few stories written of Shining Serah - mostly short poems or stories detailing supposed "encounters" with her on or beneath the ocean's waters. Most famous among these works is Paradise by Ocean's Light by the Tortle author Iakopo Galovao - which served as the story that first brought Shining Serah to the attention of the masses of Zheng-Kitar.

In stark contrast to her counterpart Drowning Damara, whose image is feared and never replicated, Shining Serah is an extremely common subject of art pieces and portraits by all sorts of artists who find themselves enthralled by descriptions of her quiet, ephemeral beauty - and who wish to depict her majesty in a work of art to earn her blessing or to simply properly be a conduit for the inspiration she gives to them. 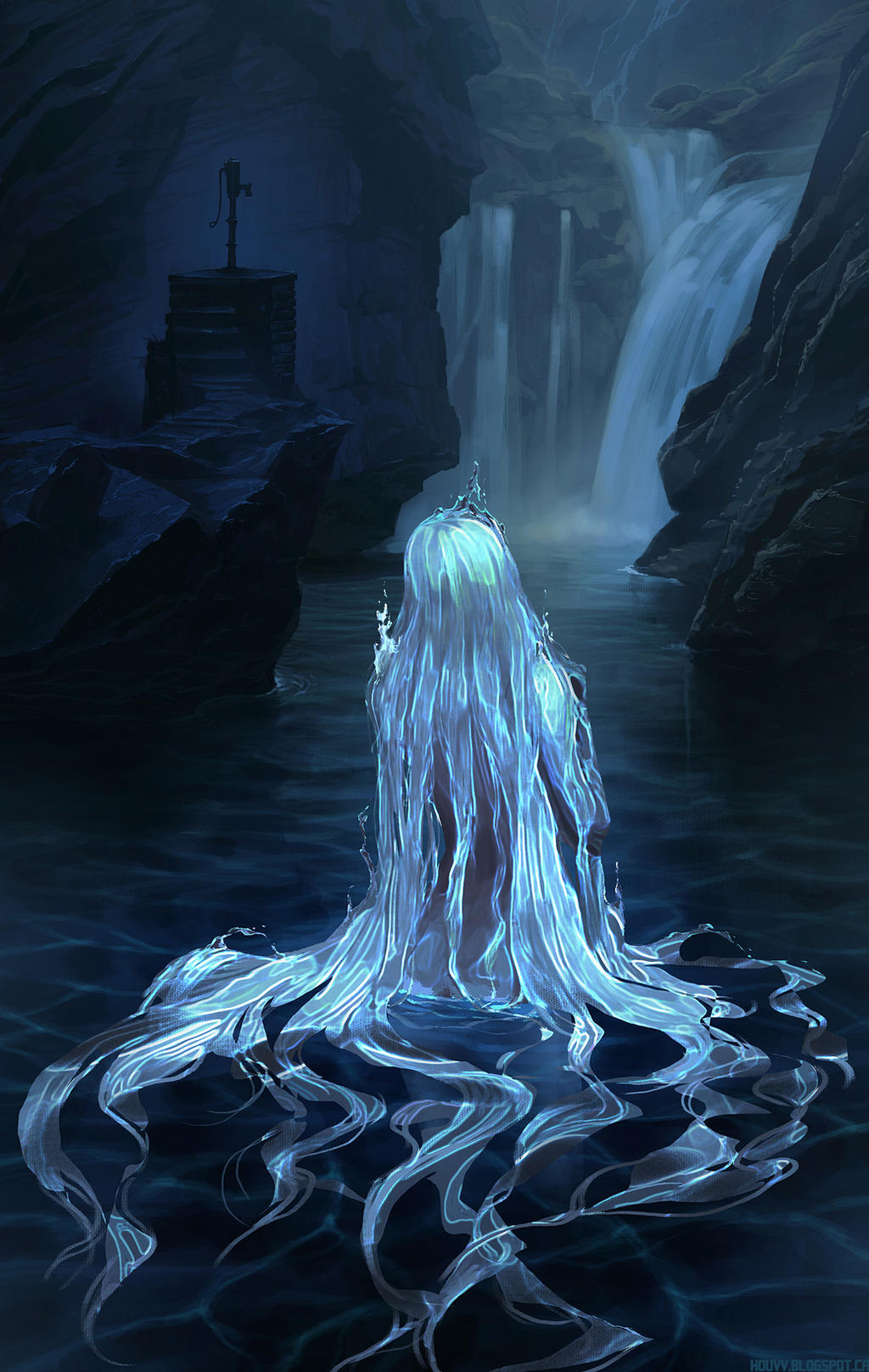 Nickname(s)
The Ol' Quiet Siren, The Glass Duchess, The Sailor's Queen
Date of First Recording
The first recorded sightings of Shining Serah, unlike the other Oceanic Spirits, first crop up relatively recently - no more than a thousand years ago.
Date of Setting
Ever since her first recorded sighting, sailors have pieced together a rough timeline of events which suggests Shining Serah's history may go back untold millions of years.
Related Ethnicities
Related Species
Related Organizations

The cruel and capricious ruler of the Liuwang ocean, and beast feared by sailors everywhere.

The gentle, benevolent spirit of the Oseishin Ocean, comforting and caring to those all who travel the seas with respect.