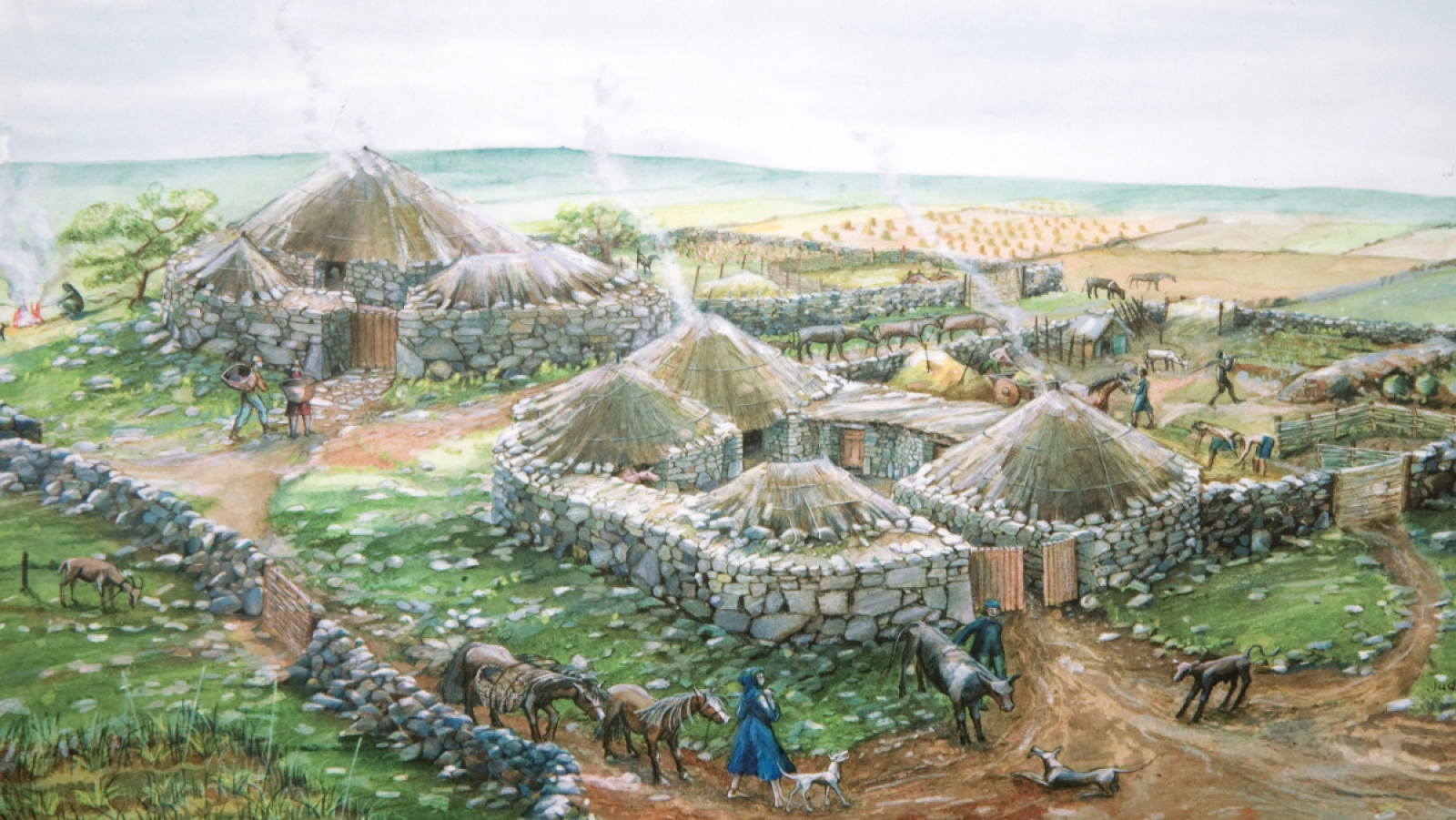 Davidion, son of pious Peuvlon and the most noble goddess Kelsia, daughter of Abbon Shabai and Tyr, hearing of king Lerimeus had challenged him to a duel, put on his bronze cuirass and after picking his weapons he mounted on his beautiful charriot with its two speedy white horses sending to him by the Gods, and went straight on to the battlefield. There he announced himself to his foe in front of everybody saying these words:   "Oh King Lerimeus, who defied all the Gods, and was accomplice of the greatest of all injustices , here I am, accepting this duel that you so much dessire. And I'll not rest until i kill you with the help of the Inmortals and my spear, in order to bring divine justice to all who think that can do as they please without obbeying the commands that are given from Heaven.


These are the most famous words from the classic epic tale The Siege of Dorstulon, the city of the Ten Walls . It makes reference to Davidion, the mythical ancestor of all the davidovian peoples. This peoples are The seris, The Ikarians/Blatians, the Oronai, the Crorai and the Kallians.
The Davidovian peoples are perhaps the most influential people in the history of Yeia, builders of some of the greatest Empires and monuments and the creators of the most advanced cultures in the world. But all of their success would be nothing if not for their ancestors, the proto-davidovian peoples, who lived north of the Hand of the Gods during the early Bronze Age.


The proto-davidovian peoples were above all pastoralists and farmers. The region north of the Hand of the Gods was very fertile thus making them very wealthy. They were also masters o bronze, becoming one of the first human cultures to master bronze casting technology. They lived in hillforts, protected by strong stone walls with various layers of moats.
On the highest area of the hillfort was located the residence of the chieftain or king, where he lived with his family and retenue.
Their society was patriarchal as was divided in 4 classes:


The proto-Davidovian peoples worshiped mostly the same gods their descendants worship nowadays.Nature was very important to them and at first they seemed to have worship animals as personifications of the gods such as owls (related to the goddess Fer, the goddess of fortune and divination). They built altars to the gods inside and outside their settlements where they sacrificed animals or did libations. Death was also important to them, and were the first culture of that area that buried their dead instead of cremate them. The nobility and the kings were buried in great tumuli that today can still be seen in the lands of the Crorai.   It is known, thanks to the beliefs of their descendants that the davidovian peoples believed they were an special people among the humans, having the inmense honor, like the elves, to have seen the faces of the gods. Thus, their pantheon, as well as that of the elves, reflected the true reality of the heavens and the gods that live there, and they were also told by them about the history of the world before the birth of humans and elves. Among the many gods that they worshiped we can name the most important ones:


The Pomptead (The Five gods of the elements):

A history of migrations


From 3500 BP until 1500 BP due to many factors such as overpopulation, climate change and preasure from the nomads to the west, many davidovian tribes decided to migrate to the East. This process of migration is divided into two waves: the first wave (3500-3000 BP), and second wave (1500-1000 BP). These waves are also used to differenciate between the different branches of the davidovian languages (for example, seris and the extinct kallian belong to the first wave branch of the davidovian languages, while Ikarian and its daughter language, Blatian, as well as Oronai and Crorai belong to the second wave branch).

What is the problem?, did i make yourself jump into the cart?
— Seris saying meaning "to frighten someone" (and it has its origins on the nomads forcing the proto-davidovians to flee)

The first wave saw the settling of davidovian tribes in the plains south of the Albine Mountains, that either mixed or exterminated the local "First Men" giving origin to the Kallians. Another group that also cross the mountains settled briefly in te peninsula of Morya before being driven out by the local tribes and forced to cross the Suris Strait. The ones that crossed the sea to the east and settled in the continent of Karia in time became the Seris, the easternmost of all the davidovian peoples.   The tribes that remained near the hand of the gods either submitted to the nomads ( it was, for example, the case of the proto-Crorai) or went east settleling in the hills and rivers north of the Albine Mountains giving birth to the Yavana culture (the ancestors of Ikarians and Oronai).   Lastly, the second wave of migrations started in 1500 BP due to the change of the climate and either the deviation of the courses of the rivers or their dryness. Because of that, the Yavana split into two groups, one went South and settled in the hills near the Great valley, becoming the Oronai (the "Hillmen"), while the other crossed the Albine Mountains and settled in the Peninsula of Morya, where they defeated and exterminate the locals,they became known as the Ikarians, thus marking the end of the migrations of the Davidovian Peoples.

The davidovian peoples success really rest upon the shoulders of giants. The davidovian peoples were the greatest colonizers in the history of the human race. Anywhere they went, they thrived and became the dominant power of their respective regions. Their descendants created the most sophisticated and powerfull human civilizations. What is also outstanding is the memory their descendants have of their distant past as a unified people, despite thousands of years of evolution and differenciation between them.

The davidovian languages descended from proto-davidovian are the most widespread and spoken languages in Yeia. They probably began to diverge between them around 2000 BP. The davidovian family of languages is composed of 6 languages: Kallian, Seris, Ikarian, Blatian, Oronai and Crorai, from which only one is extinct, Kallian. All these languages are, because of this, closely related between them, but only few of them are mutually intelligible to a high degree (like Oronai and Ikarian). Despite this, speakers of davidovian languages can understand isolated words and also numbers or basic phrases like: My name is or How are you?.

(An Ikarian and a Seris having problems to understand each other)

Due to their dominion of bronze casting technology the proto-davidovians became very skillful craftsmen. They traded their bronze weapons and tools with their neighbours while they were living near the hand of the Gods. Once they began to migrate they carried this knowledge with them. They are the responsibles of the introduction of bronze tools and weapons into Karia, the eastern continent, where the native peoples of the continent still used stones for crafting their tools and weapons. With these bronze tools, agriculture became more productive and the existing societies became more complex, but also the need for bronze in some regions created a really complex network of trade between different realms.   Wherever they went, the davidovian peoples also changed warfare. Their armies were composed not only of infantry but also of war charriots, designed to break into enemy lines or as mobile platforms for archers. This type of warfare was quickly adopted by the natives of Karia, specially among the most developed societies like the Menarites and the Southern, Dark and Sun elves and the charriot became a very common sight in the battlefields in both continents for millenia.   Before them, the Interior Sea separated these two different worlds and societies, after their migration, it became a great highway for trade, something that still survives until nowadays.


Myths and places involving them

The Siege of Dorstulon, the city of the Ten Walls

Great tumuli of the Albine mountains


Chronicle about the Davidovian peoples 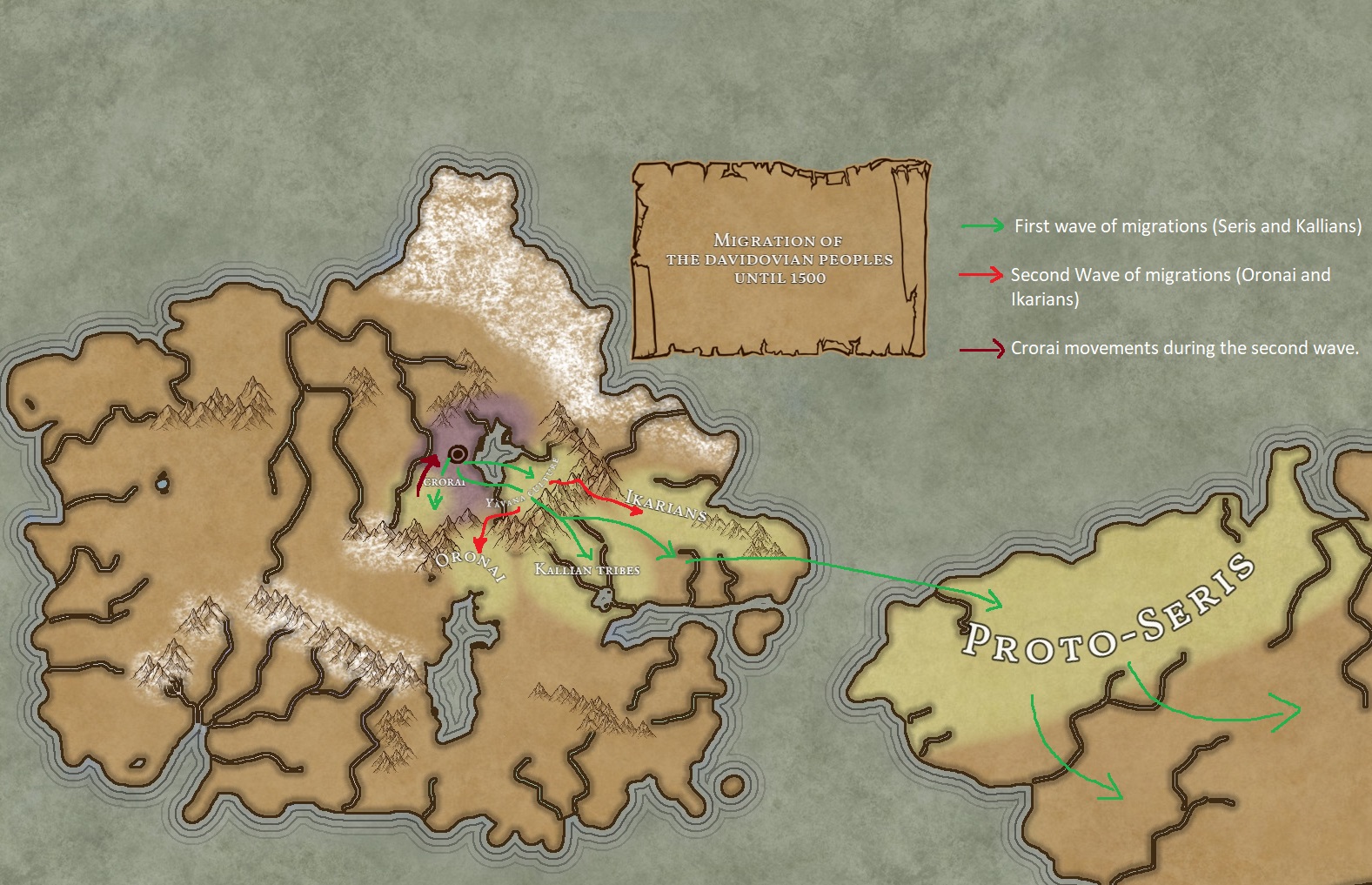 This was such a well-written and detailed article, and a joy to read. It was a bit hard to follow the migration without a map, and I did come across a few spelling mistakes. I cannot wait to see more art for this article. I have my eyes on you :P

Thank you so much for such a nice comment,Panthers!! I'm so happy that you like and enjoyed it!!. I took note of the advices you gave me and i hope that the article is better organized now and also that the migrations of the proto-davidovian peoples are more easily to follow with the map i made. And rest assured, i will let you know when I add more art to the article :3

You were able to fit so much lore and history into this article! I love the legacies left behind. Good luck in the challenge!!

Thank you for your nice comment!! I'm so glad that you like that part of the article!, they certainly left their mark in Yeia!. Good luck to you too RandoScorpio, i read your article and its so beautiful and interesting! (my apologies i was a bit busy and I haven't been able to leave a comment yet)

Nicely done article with lots of information. I felt very informed about much of the culture and history. The differences of language were a nice touch!

Thank you so much Kefkejaco!!,Glad to see you back!! :3. I hope that you found these culture ( and the article in general) interesting. I'm also reading other peoples articles and the next one i'm going to comment is yours.

Love the amount of details in this article, Well Written and details as other said, very well done!

Ohh thank you so much Shadow for your kind words!!. Hope that, despite the types, you could enjoy reading the article!!.

Oh, great article.
I love the "talk" about the cow, its shata or shacta?

Thank you very much Johe!!. Its shacta, thanks to your comment i realized i made a mistake in the first sentence of dialogue, thank you for letting me know!! ;)

Very cool article, and I love the look into their linguistics! It's a subject I really enjoy, so it's a delight when it comes up in articles :)

I like how your article is clear and specific while leaving lots of room for unknowns, which gives it this great sense of deep history. Great job! :)