The world watched when the moon goddess was engulfed. Her sword, stained with the ichor of her enemies, a glittering meteor that fell to the moon.
— Instructor of Recruits

Everyone saw where it fell on the moon, but when the armies got to the crater it was gone. Everyone who gets to the moon has a look around to find it. Can you imagine? Wielding the weapon of a god?
— Sgt. Kill Flayer

The moon god Thaya wielded a reverse crescent sword, a ginunting, with the power to extend the length of a million lakes and wipe out an army with one slash. During her life, she would lend it to worthy mortals. She began her life, and ended it, with her Ginunting in her hand.

The Sword is Drawn

Thaya opened her eyes for the first time. The serpent Bakunawa barrelled towards her, its enormous mouth full of fangs open wide. It had already eaten her six other siblings on the six previous nights. Instinctively, she dodged out of the way and summoned her rage as a curved sword, a ginunting.

The great serpent coiled back towards her. The sword flashed silver, extending the length of a million lakes to behead a monster that could eat a moon.

The newborn goddess collapsed, overcome with sorrow. She was alone. The sea reached up to comfort her, creating the first tides. 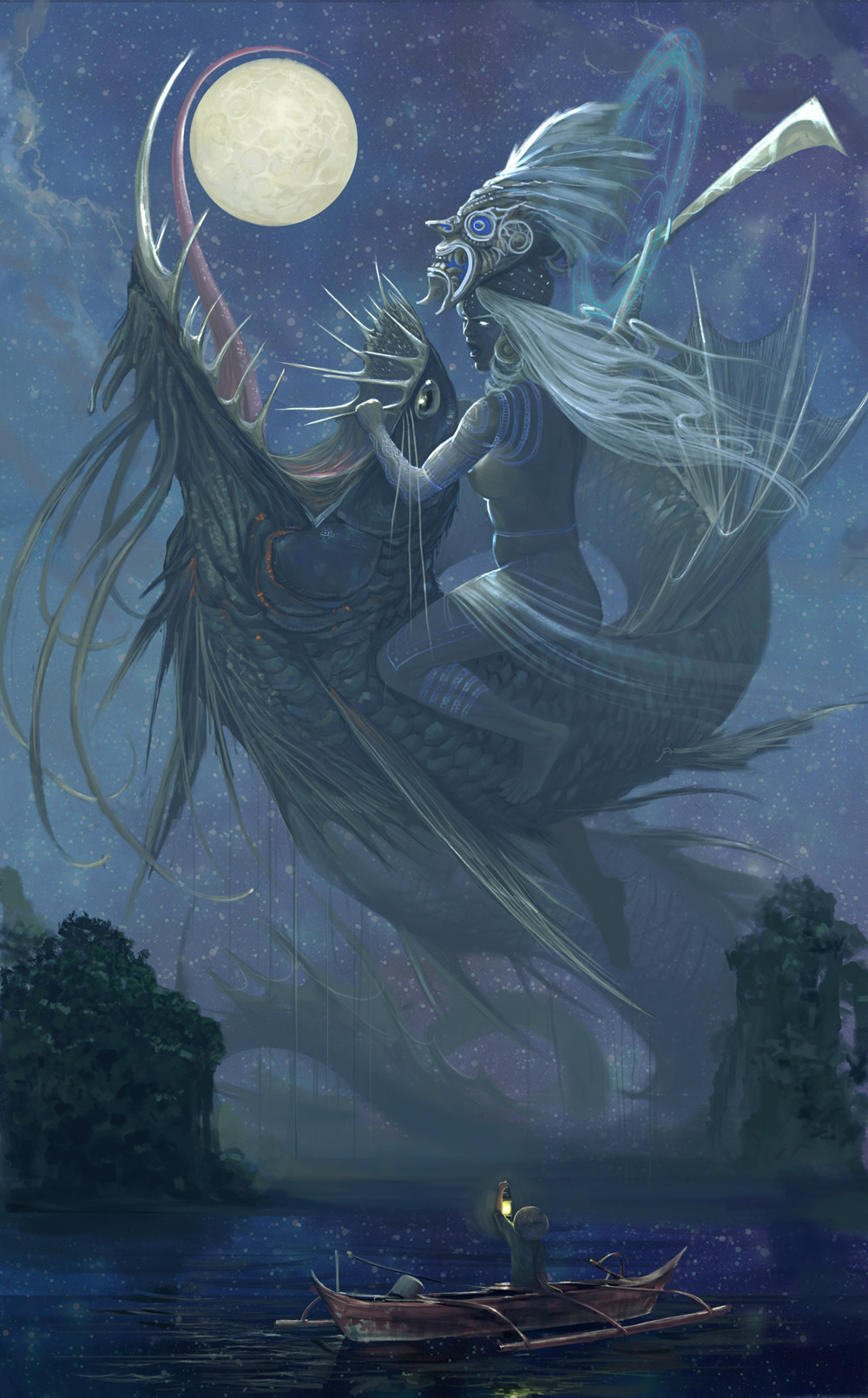 Haliya vs Bakunawa by Godfrey Escota

Thaya became a goddess of sorrow, magic, righteous anger, and vengeance. In the time when gods still walked the world, she would gift her blade, the Ginunting ng Thaya, to heroes who caught her eye or sought her favor. The most famous of them was the warrior Rampol, who became the Sun God and her husband

Millenia later, on the Night of the Shattered Moon, Thaya faced the Bakunawa once more.

A horde of invaders from the Far Realm broke into the crystal sphere. They swarmed towards Erathia, with the intent of cracking it open to release the greatest of their kind. The gods rose to meet them.

The horde condensed taking the form of the ancient serpent Bakunawa. Thaya's old foe had returned from death, from a realm beyond the Great Wheel. The enormous beast arrowed towards the world to break it open, but was deflected by the combined might of the gods.

With the initial strike blunted, the gigantic serpent's eye caught sight of its old desire. It turned towards the moon, along with a horde of Far Realm aberrations.

The gods were caught by surprise. Thaya stood alone against the horde. For the last time, her crescent ginunting flashed across the sky. A silver sword the length of a world sliced through the horde: Once. Twice. Thrice.

The goddess disappeared underneath the flesh of the abominations. Her sword fell to the moon below.

Green and black tendrils covered the face of the moon. The Bakunawa had finally won.

After the War Against the Far Realm, most of the aberrations were ejected from the moon. At the moment of her death, the entire world saw the sword fall to the moon, but it has yet to be found.

The elves patrol the dust of the broken moon seeking vengeance for the death of the Silver Lady.

Answering: "Write about a myth or legend relating to a famous, long-lost item."
Visit kitoypoy's Competition Page Check all other answers to this prompt Competition Homepage

Beautiful article - I enjoyed hearing it read on stream! :)