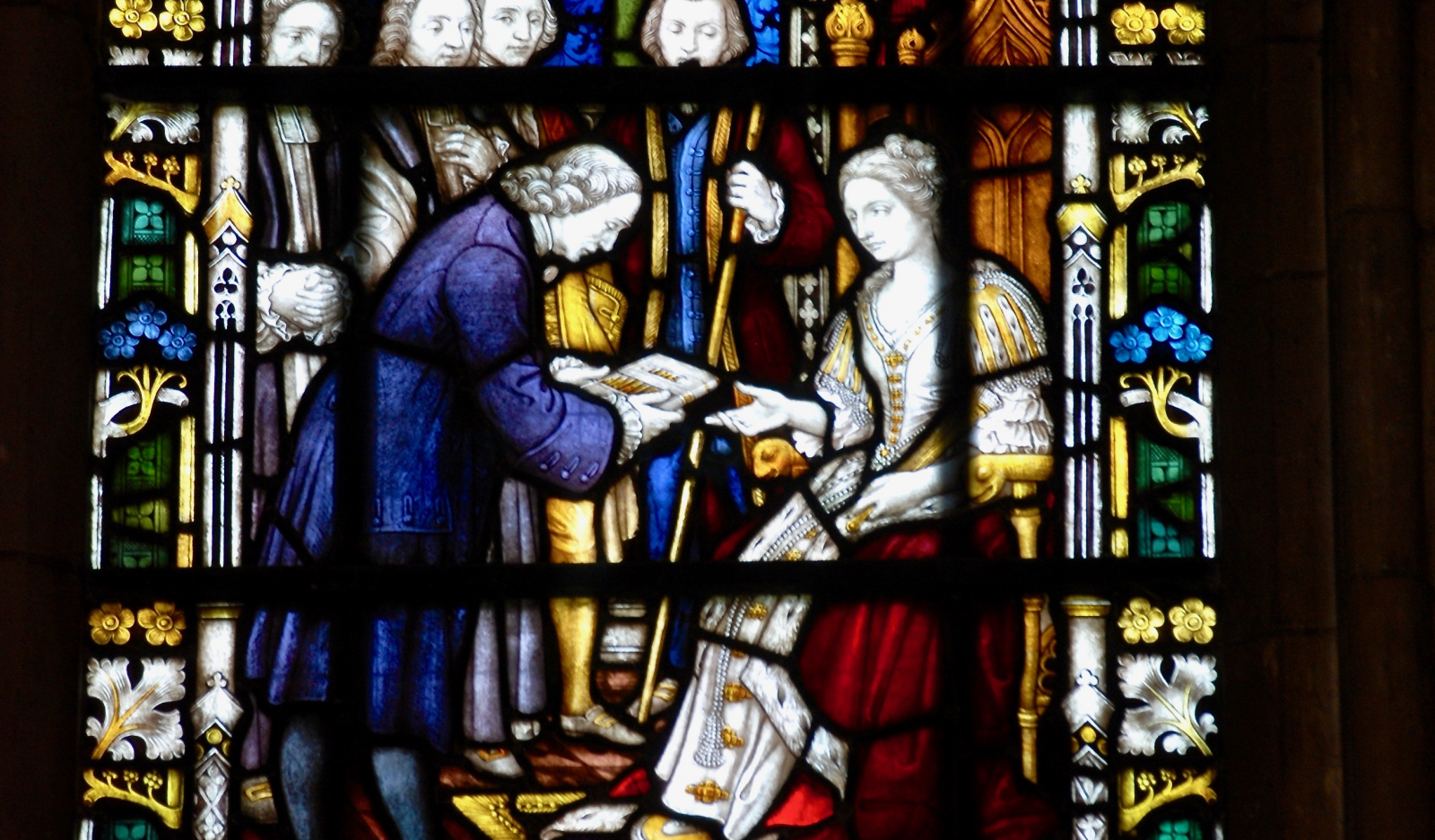 As the second ever ruler of one of the youngest nation in Turoza, Hortènsia Tarradel was faced with an enormous challenge placed before her when she succeeded her father to the throne of the Emirate of Taqwal. With the Sultanate of Fashaddon still trying to force the Emirate back under their rule, Hortènsia has had to contend with protecting the Emirate’s borders from without and shoring up and encouraging the strength and courage of the burgeoning nation from within.

Hortènsia Tarradel stands at around 5’8” tall from the top of her head to the ground, but she is four inches taller if measured from the top of her first pair of horns to the ground. She is of a rather slim and slight build, but this has lured some who intended to do her harm into thinking that she is helpless. On the contrary, she can move as quick as lightening if she wants to and is much stronger than her physique lets on.   She has a fairly triangular shaped face that tapers down towards her chin. She has light red coloured iris in her eyes, which stand out quite starkly from the light blue colour of her skin. Hortènsia has two sets of horns that protrude from her long black hair, her first set rises and curves back from the top of her head, like those of an antelope, whilst her second set start just above her ears and curve down round the side of her face like ram’s horns. She has a long tail that is predominantly hairless, except for a tuft of jet-black hair right at the tip, like that of a cow or giraffe.   The Emir’s status is apparent, though not overstated in her posture, and she holds herself very upright, and moves in a light and graceful manner. She tends to wear gloves, even on the hottest days, and this is to hide an intricate nexus of fine red scars that crisscross over the back of her hands. It is not overly apparent how she acquired the scars, but it seems to have happened at some point whilst she was studying the arcane arts in Harbotha.

Born into the first ever court of the Emirate of Taqwal in 504S.E., Hortènsia experienced a royal childhood quite unique to that of the other Kings and Queens of Turoza. At the time of her birth, Taqwal was going through some of its darkest times, as the fighting in the war of independence had been raging with the Sultanate of Fashaddon for nearly 40 years. Indeed, shortly after her birth, Hortènsia and her mother, Amàlia were sent into hiding in the south of the country by her father Emir Ramir Tarradel, as it was feared that the Fashaddonite forces would reach and lay siege to the city of Taqwal itself. Fortunately for Hortènsia and Taqwal, Ramir managed to halt the advance of the Sultanate’s forces at the battle of Fluxsagnant, less than fifty miles from the walls of Taqwal. The defeat Ramir was able to inflict on the Sultan’s forces was so decisive that it triggered the first period of cold war between the two nations, where neither side was able to muster enough strength to launch an attack on the other.   During this first period that saw little or no physical fighting between Taqwal and Fashaddon, Emir Ramir was able to channel his resources into shoring up the new nation he found himself running, and making provisions for the future. This encompassed not only the future recommencement of the conflict with the Sultanate, but also for a future of peace and stability for his nation. The education and nurturing of his daughter was a key part of this provision, and from an early age, Hortènsia was prepared to take over the rule of the Emirate from her father. At first, her education revolved around tutoring in core subjects, but this then branched out into an in-depth education in economics, taught to her by representatives of the Guild of Coiners & Moneyers, and finally several years of learning more about the arcane from the Dragonborn of Zhisbon.   Hortènsia spent two and a half years studying magic, its uses and applications in the Academy of Arcanology in Harbotha, right on the border of Zhisbon and the Sultanate of Fashaddon. The natural aptitude for magic she and all Tieflings hold was shaped and refined by the Academy Masters, and when it came time for her to leave the Grandmaster of the Academy personally petitioned Emir Ramir to allow her to stay on. Unfortunately, matters at home meant that the Emir needed his heir to be by his side to help steer and govern the nation. Hortènsia’s time in Harbotha was not all plain sailing, however, as she was involved in some form of magical accident whilst studying at the Academy, thought to have been caused by another apprentice catastrophically miscasting a spell. Hortènsia still bears the scars of whatever happened on her hands. In any case, her time at the Academy proved incredibly useful not just for her own education, but also because it provided the Emirate with a strong diplomatic relationship with Zhisbon, that the Dragonborn honour to this day.   On her return to court, Hortènsia took on a number of responsibilities to help in the running of the Emirate, and her natural flair for diplomacy meant that she often went in her father’s stead to important meetings and summits that required the presence of one of either the Emir or a member of his family. This even extended to her attending an abortive peace summit just over the border in the Sultanate of Fashaddon, which turned out to be nothing but an excuse for the Sultan at the time, Devran III to mouth off about the ‘upstart infernal emirate’. Indeed the situation became so heated that the Sultan broke the non-aggression pact required for the summit to take place and ordered Hortènsia’s beheading. Thanks to the quick actions of her bodyguards, Hortènsia managed to escape, but not without the loss of some of their diplomatic entourage.   As Emir Ramir’s health began to fade in the later stages of his life, Hortènsia took on more and more responsibilities to ease the burden on her father. By the time of Ramir’s death, Hortènsia was running the Emirate as Princess Regent, so the official step up to the position of Emir in 536S.E. was not a particularly arduous one. For the last 17 years, Hortènsia has ruled as the Emir of Taqwal, and she has made it her duty to continue to prepare her nation and people for the future, as her father had before her. Now, with the shadow of war returning once more from the Sultanate of Fashaddon, it looks as if Hortènsia will be tested harder than she ever has before, as the impulsive and aggressive Sultan Mutasim I looks to stoke up the fires of the cold war, and bring it blazing back to life.

As the first ever Crown Princess of the Emirate of Taqwal, great pains were made to ensure that Hortènsia had access to the finest possible education, so that she was best prepared for the rigors of rule. A large part of her education was delivered by tutors and governesses, who were brought from across Turoza to deliver lessons in history, mathematics, politics, military strategy, science and languages. In addition, Hortènsia was accorded the singular honour of being given an education in economics from representatives of the Guild of Coiners & Moneyers, who are based out of the city of Taqwal. Finally, the Crown Princess spent a couple of years receiving minor instruction in the arcane arts in Harbotha’s Academy of Arcanology in Zhisbon.

The Emir is known for her calm and level-headed demeanour, and even in the direst situations has been known to not only remain the perfect picture of composure herself, but to radiate calmness amongst those around her. In addition, Hortènsia is renowned for being a consummate diplomat, a trait that has stood her in good stead, especially in the face of the large number of ridiculous and callous demands that come from the Sultanate of Fashaddon.   Having grown up in a newly formed royal court, the Emir is well versed in the intricacies, both above and below the board of political life. She has a knack for knowing how to keep people who are normally at odds together in a room, and how to get them to work towards the goal she wishes to achieve.   Finally, amongst her people, Hortènsia is widely loved, and is thought of as being a compassionate and caring leader. She always seems to know the best places to be seen and to make public appearances to incite the largest moral boost, whether that be in the poorer district of Taqwal, or amongst the troops in one of the border forts.

Hortènsia’s family was well known for being wealthy well before her father Ramir rose to the Governorship of Taqwal prior to independence. This family fortune, which Hortènsia has inherited, was primarily based on agricultural production, particularly that revolving around the production of textiles, and industry that has thrived in the Vermell Peninsula. Despite the family’s ascension to the throne, the Tarradel agricultural concerns still operate, all be it managed by other members of the family and loyal retainers, rather than by the Emir herself.   In addition, her position as the Emir grants Hortènsia the boon of being able to live within the Emir’s palace, which is owned technically by the state, rent and obligation free, and the state provides a generous base level of comforts that can be subsidised by the Emir’s personal fortune.