This is one of the reporting logs of Mimi Lakes, a Naiad from the Depths, out to prove that she can become a fully fledged Knowledge Liasion Officer.

This is her fourth report.
To follow her Mimi's story, head to

Toilmonth the 8th, Year 49 of the Century of the Nymphs, 26th Cycle
Elven parties are good fun, well, they have the best food. Tish had her coming of age ceremony last week (Toilmonth the 2nd) and baked an amazing bread with many fun flavours. The table setting was real cute too! 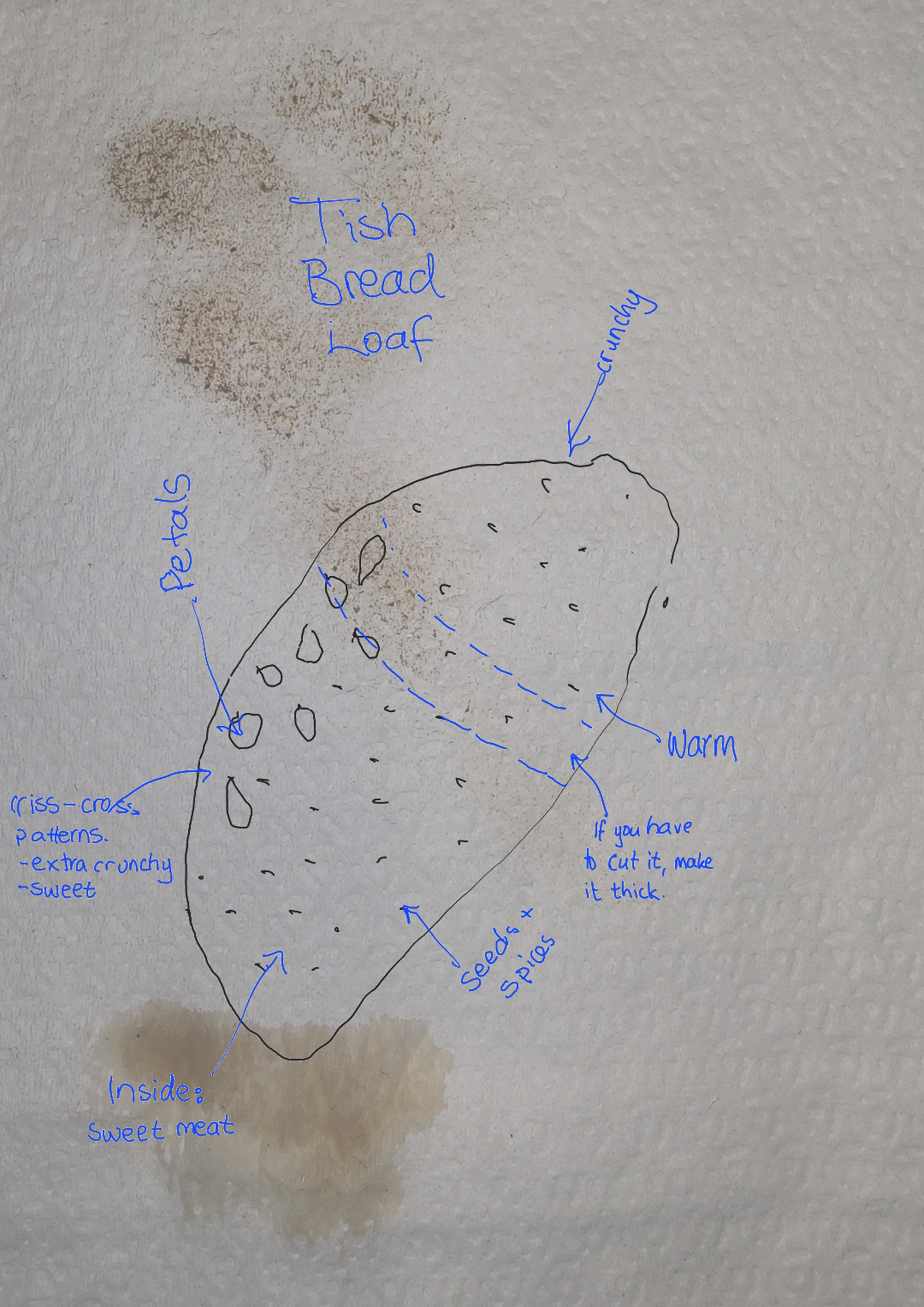 by TaraFaeBelle
Tish made a wonderful oven ... well, it cooked the bread well, so it must be wonderful. It was as tall as me, and there was fire, so I stayed on the other side of the table.
I, as her Mermaid friend and Naiad friend, gave her some meat and an edible flowers. Tish put the petals at the top of the bread before baking, so they baked into the top, making it look so pretty. And the meat was in the bread, kinda swirled in so you could still cut the bread as bread. There was also some seeds and dried fruits. Unsure whether the fruit was the other Dryad hiding in the room, or the Fairy hiding behind the hiding Dryad.
Tish's bread was so good. After she put it on the table, I ate it. I don't know why everyone else just stood around and gasped - food was ready to eat once the bread was on the table. Some people started yelling - her parents and master, I think. But Tish just laughed and brought out more bread.

Tish is currently 89 years old. She is very good at what she does, so her coming of age ceremony was a little bit earlier than most other Elves. The Forest Elves all like to celebrate when they do stuff really well. Their coming of age, for example, is more about them finishing their apprenticeship than actually being about age. I don't know why they call it coming of age then. Even though Beast-kin also have a weird not exact age thing. Though, at least theirs is more of a generation has come of age, and so there is only a few years one might turn into an adult Beast-kin. But Elves don't even have a metamorphesis to signify anything, so maybe that is why they have a 70 year gap of potential ages.
Tish is super good making furniture. Even the stove had a pattern carved on it, not just the cutlery, the plates and the table and chairs. They all had a pretty (pink) floral pattern - it matched the petals I gave her for the bread. The design was really cute, with a vine running behind the flowers, and the stone was pure white. Everything in the room that was made by her was either pure white, or made with metal. It was mostly the pattern that was metal, and a few strips of metal around the side of the table and room.
As Tish is now an official architect, it makes sense that she has really white things. I heard that most Forest Elves can only make grey-brown furniture, and don't even bother with the walls, as that would make it look worse than the room already is. But Tish is amazing, so she made the walls better.
I also heard that many Elves decorate their cultery by carving out patterns. But Tish not only carved out the purified stone, she moulded metal into the stone. Many people were impressed. I chose not to tell them of the piles of broken patterns in the cupboard in the next room over that Tish hasn't had a chance to recycle yet. That's something she isn't so good at. It just takes her longer to do though, not that she can't do it. Which is what I was trying to say to her fancily dressed guests when she covered my mouth with her hand. 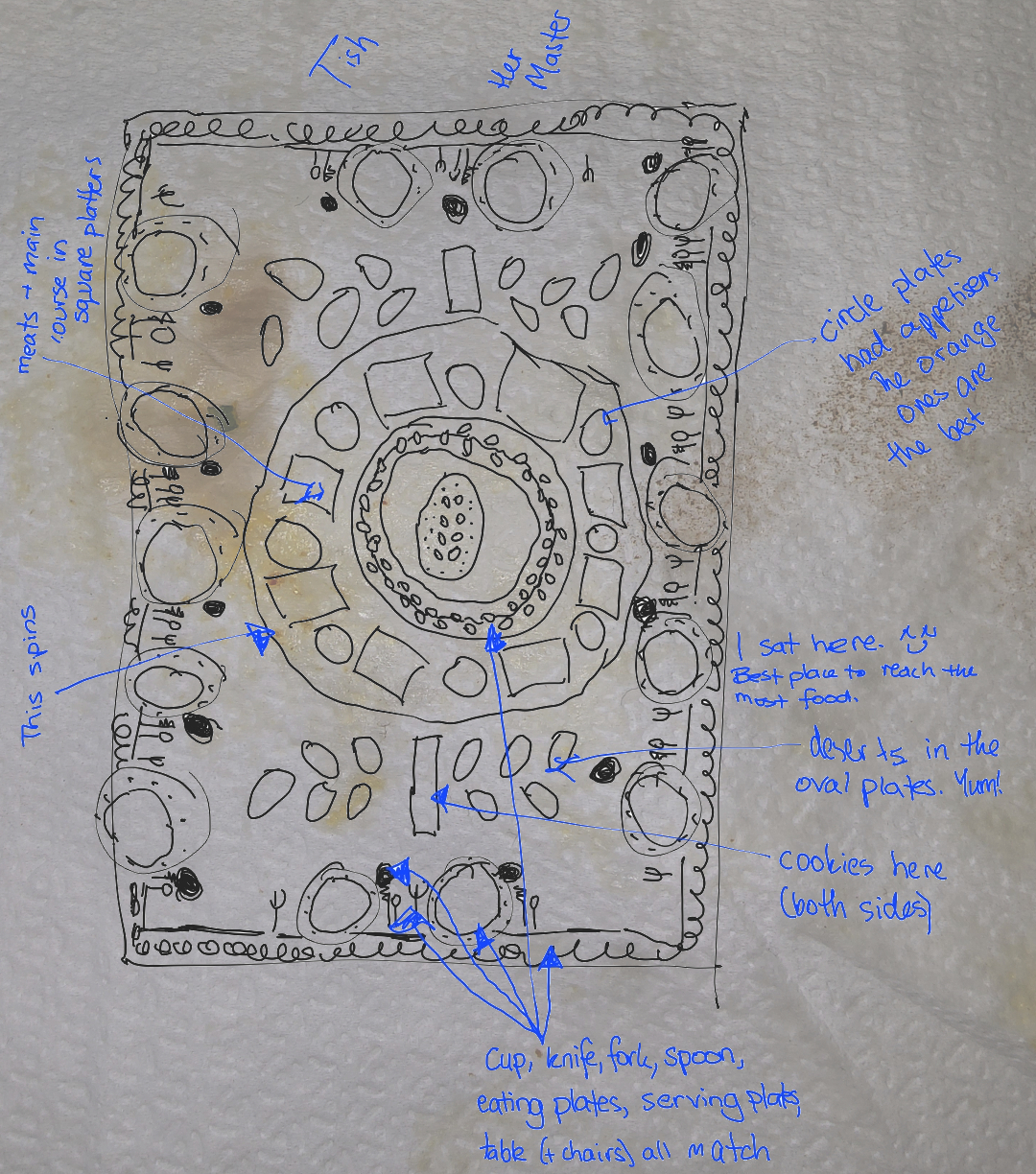 Tish's architecture master was the first one to eat the second loaf of bread. Apparently, they decided to do the judging first, before eating the rest of the feast. I even got more cookies for her from Jazzach's brother, so I don't know why everyone glared at me when they decided this. I properly checked that we couldn't eat until bread was on the table - it was so hard not to eat the rest of the feast already prepared. She is my friend, so I checked that much.
Tish's master ate the bread and smiled. "You have done well, my apprentice," he started saying, ending with how amazing she was and something about seashells.
I was thoroughly enjoying the oysters by this stage.

Tish is amazing, and even did really well at her coming of age ceremony. All of the people their were praising her, and pretty much were very impressed. Only one person was mean and that was only because he was jealous. But don't worry, Loyce won't be able to say anything mean about her again.

Your behaviour is one thing (be sure to show up at our next meeting, we will discuss this then), but your content needs drastic improvement. Imagine someone who has no idea of who you are, or what you like. You are writing to that person. Thus, your desriptions need to tell that person (who does not know what you are thinking, nor what you are seeing) what is happening there. Things to have in your reports:
Do not add new content in the conclusion. I do worry what happened to Loyce, but we will talk about that soon. For the report, if he is to be mentioned (jealousy of other's hard work and proceeding good fortune is an appropriate observation), it does have to be in the body of the report.
Do not add napkins to your report. If the original picture is drawn on the napkin, either redraw it (particularly if there are food stains) or scan it and add the scans to the report.
Again, pick subheadings that explain what is to be the key point in the section it is representing.
As you will have some available time soon, you are able to rewrite and resubmit this report.
Council Notes
A four month suspension has been handed to Mimi Lakes. Suggestions for a partner to watch over her behaviour. Her eyes could be useful, but if she cannot behave in a proper manner, we cannot trust her outside. There are always 'clerical' positions available.

Answering: "Α food that marks a rite of passage for a culture in your world"
Visit TaraFaeBelle's Competition Page Check all other answers to this prompt Competition Homepage