The red counterpart to Ao no Kitsunebi, and eighth daughter of the fox goddess Kuzunoha . Aka no Kitsunebi has been blind, deaf, and mute since birth, a circumstance of her divine ancestry interacting badly with her mortal half. Until recently, she relied on her brother, Ao no Kitsunebi, to support her with his psychic abilities, but has since become servant to Matsumoto Ooawagaeri, and communicated with him telepathically to understand her surroundings. More recently, an encounter with her father, Sugawara no Michizane, left her with her impairments healed.   Perhaps due to her upbringing, or perhaps due to the same genetic defect that left her without senses, Aka no Kitsunebi seems to have little in the way of personality and agency. She follows Ooawagaeri's orders without comment or complaint, and only ever agrees with him. She does, however, show some concern for his safety when the situation calls for it, so she cannot be said to be truly emotionless.   Her state left her without much opportunity to pick up hobbies, and so she normally spends her time merely quietly waiting until she is needed by her master.

Eidetic Mastery: Her connection to the god of scholarship, Tenman Tenjin, grants Aka no Kitsunebi the ability to rapidly memorize and recall certain sensory information. She cannot retain this knowledge for long, but, in the moment, can reproduce it perfectly. When her senses are linked to another humanoid, Aka no Kitsunebi may use any of their learned physical skills (physical Secondary Abilities, Attack, Defense) in place of her own. This ability loses its effect when Aka no Kitsunebi is not sharing senses with any other creature.

The red Kitsunebi was present when Matsumoto Ooawagaeri was held in the Temple of Kuzunoha, but said nothing and took no action.   She later attempted to stave off the Hashinara Clan rescuers when they attacked to rescue Ooawagaeri, but was incapacitated when they killed her brother, Ao no Kitsunebi, upon whom she relied for sight. After a short, blind struggle, she was captured, and subsequently given to the Matsumoto scion as a gift from Kuzunoha. Ooawagaeri quickly introduced her into the Hashinara mental network, allowing them to communicate. Aka responded badly to news of her brother’s death, but still followed Ooawagaeri on his scouting mission, alerting Shigeaki Fujino, and the rest of the clan by proxy, when he failed to return from reconnoitering the area. Fujino then returned her to the capital until her master could be recovered.   Once Ooawagaeri was freed from his stone prison, Aka no Kitsunebi was the first to know; the first individual he contacted. She remained in Wakigami, however, while her master left for a new adventure without making his return. 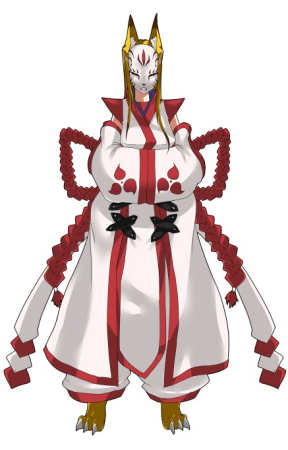 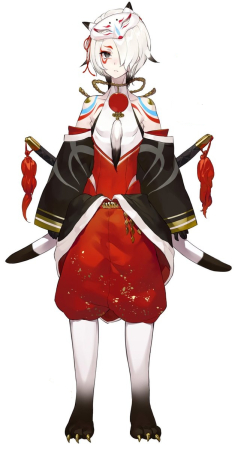