Perilun is a Human City in a strategic location for observation and defense against Udai, known best for its large, dangerous looking bridge, the Perilous Place.

There are many draws for tourists to come to Perilun. Here are some things they would find within the city.

The Perilous Place is the bridge that made Perilun famous. It stretches across the bay at the center of Perilun, the Narrow Bay.   The Perilous Place is named as such because of its rickety, improbable design that makes it seem a nightmare to cross. Walking across it, to those unfamiliar, would seem a death sentence.   In truth, it is incredibly stable. It sways on occasion, but has never buckled far enough to even give the illusion of breaking.   While at first it was detested and feared by the residents, it now stands as a treasure of the city, being what is minted on all coins from the city and what is the largest draw for tourists to come to the city. 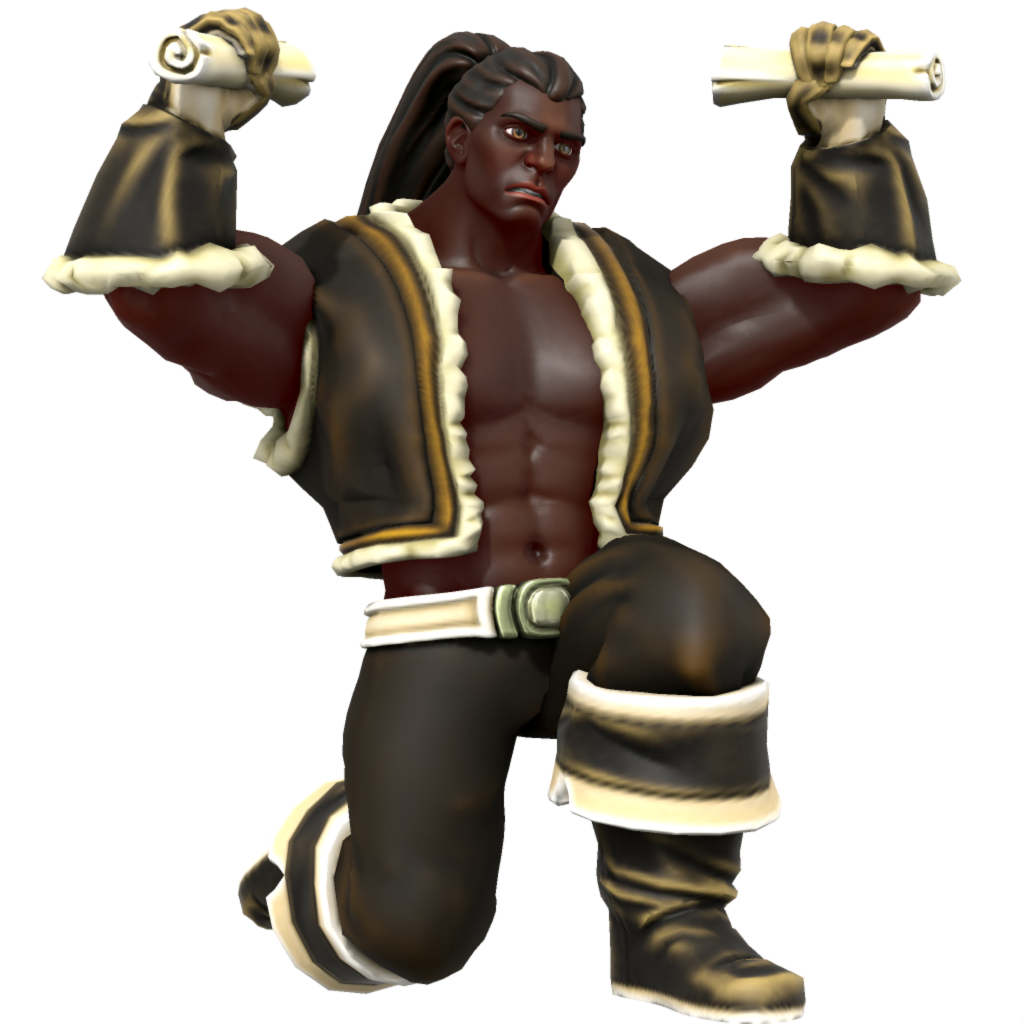 Mangodd Bloodclaw by Jarhed
Mangodd Bloodclaw was the man who built the Perilous Place. He was known as a crazy architect for his outrageous designs, but not a single building of his was ever actually deemed dangerous.   Despite him being famous in Perilun for building the Perilous Place, his statue is actually representing his most famous tale at the construction of a spherical Elven building called the Monde.   The Elves had asked him to build it so they could rid the Humans of one of their top men. After Mangodd built it, they asked for him to stand beneath it, claiming they did not trust its integrity. He agreed, and as he stood there, the Elves used Magic to knock it off of its foundation. It fell atop Mangodd, but... he caught it and held it up as he knelt. He refused to let it fall, and in doing so showed the Elves that it was structurally sound. It hadn't broken and the interior was still stable even while tilted.   When they agreed, he finally put it down, allowing it to crush him. The Monde still stands in the Elven Capital of Camor, and the statue of this deed kneels in Perilun.

The Narrow Bay separates Perilun in half from East to West, into the two districts that were once the cities Peripet and Lunif.   It is relatively shallow water compared to the Northern Sea it connects to, with very few fish that live within it. Still, it is deep enough to have boats going from Peripet to Lunif, though they are small boats that cannot transport large amounts of people.

The Orc Wall is a wall on the western coast of Perilun, specfically the district of Lunif. It was built to protect against invasions from the West, as the residents were terrified both of Orcs and Loxodons invading Elone and beginning with Perilun.   It is believed that Perilun is the deterrant that stops Loxodons from bringing Orcs on their boats to invade Elone, however the truth is more likely that Orcs would never agree to work with Loxodons, and would sooner kill them and take the boats. If this has happened, the boat would have most likely been stranded at sea.

One of the more reputable schools in the Human cities, Perilun has a college program in its old Adwick Keep, a castle that was once built by the mayor named Adwick Wickwatcher.   The campus for the school is mostly within Adwick Keep, which makes up a large part of the Peripet district. There, they study history and politics so that they can one day contribute to the Kingdom of Man.

Perilun is under the rule of Nerodil's Human Kingdom. Therefore, they directly answer to the King of Humanity.   As a city on the western side of the Kingdom, Nerodil is much more involved with Perilun. The Nerodil Guard are often seen in key places in Perilun, guarding locations or keeping the peace. A stroll on the Perilous Place is never lonely, as guards are stationed all over it to keep people from falling or compromising its structural integrity.   The Mayor of Perilun doesn't have much power, as they answer the King of Humanity. However, they do get the power to approve buildings that are proposed, and to call upon the Nerodil Guard in times of trouble. The current mayor is Humih Heihum.

Perilun was founded as a foothold for the Human Kingdom on the western coast of Elone in 18.   The King at the time, Medrir Regalcrest, was worried about the West. He had heard that on the continent in the West, Udai, there were Orcs who were barbaric and evil. When he sent forces West, he found that Orcs did not have boats or means to reach Elone.   However, the Loxodons of Ruzrugh did. Not only were the Loxodons large and intimidating, but they were also the first Beastmen that the Humans had truly seen. They were also an economic powerhouse. Medrir now insisted that they must built Perilun to gain a foothold in this region.

It was initially not Perilun. Founded around a bay, there were two cities. Peripet and Lunif. Peripet was the Eastern of the two cities, being where the sun rose from, and Lunif was the Western, where it set.   However, as the cities built up, they began connecting on the Southern Bank. This was good for them, as they had been friendly, but it made travel between the two cities, who were slowly unifying, quite difficult if you lived in the Northern section.   So the mayor at the time, Rhushar Skyswift, commissioned an architect to build a bridge to connect the new joint city. This architect was none other than Mangodd Bloodclaw, known for building the flooded city of Roaroux and helping it withstand constant rain.

Mangodd Bloodclaw decided to try out an idea. He wondered if he could build a bridge that looked incredibly dangerous, as if it were about to break, and yet make it as sturdy as can be. So he got to work, and eventually it was done. A bridge that was deemed dangerous enough to be called "The Perilous Place" but too expensive to be torn down.   As Mangodd was dragged out of town, he said to them,

Rhushar Skyswift agreed, and as Mangodd's carriage rode across the bridge, it buckled slightly, but never even came close to falling. Rhushar gave Mangodd his payment and let him go on his way, thanking him for the bridge.   It was after the construction that Peripet and Lunif officially joined together, adopting the name Perilun.