Avos is a Gnomish celebration where gifts are exchanged between loved ones. This holiday is meant to celebrate the prosperity of the Gnomish people in their harsh environment, though in the time since its creation, it has spread to many other cultures.

Origins of the Holiday

The Gnomes originally lived in Dwarven Territory with the Dwarves. A mountainous, snowy place, it was home to thousands of Gnomes. However, there came to be a Dwarven King who disliked the presence of Gnomes in his land. He wanted only Dwarves. So he forcefully removed the Gnomes from their homes.   They tried settling in the Elven Forest, but it was too dangerous with Elves and the natural things in the forest trying to kill them.   So they found the Uncharted Desert, East of the Dwarves and Elves. A place only inhabited by scarce tribes of Goliaths who would likely not bother them. They decided this would be the place they settled. So they set up a city named Lebalos in the year -1510.

They were failing to produce much in the time after the city was founded. The desert was not able to grow many crops, and many of the animals there were very strong. They were living off of baby sandworms and camel remnants. After all, they wouldn't need the camels anymore, since they weren't going to travel very far.

However, a Kenku named Sainter (check the Sidebar to learn more about Sainter) arrived in the year -1470. He saw how the Gnomes suffered and wanted to bring prosperity to them. First, he helped them make weapons that would help them hunt, and taught them the basics of Magic to help as well. He gave them crops that would grow in the desert: Onions, corn, cabbage, etc. There were two specifically that amazed them.   The first was the watermelon, a large fruit that they never would have expected to eat in the desert. Watermelons were about the size of a Gnome, meaning one singular watermelon plant could likely feed a whole family.   The second was the apple. The Gnomes had tried growing apples on trees, but it only worked on scarce occassions. However, Sainter showed that crops in the desert were adaptable. An apple could grow on a tree, sure, but it could also be mixed in with another plant. And so, the symbol of the holiday of Avos was made. The apple cactus.   He also noticed one of their greatest struggles was the heat. Many Gnomes were not used to the weather and were subject to constant heat stroke and dying of overheating. So with his ability Let it Snow, he made snow that cooled them down.   When it snowed over Lebalos, the Gnomes cried. It was not much, especially compared to everything else Sainter had done for them. But it was the sign they needed that prosperity could come to them.

With that, Sainter gave them the last of their gifts. After granting them weapons and lessons and crops and snow, he had given so much. But as a final gift of prosperity, he gave the Gnomes three barrels of beer.   They asked how they could possibly repay it. They said when they were prosperous like he wanted, they could give back, but Sainter laughed as he sat before them. He said:

"Repay me? No, that's not what you should do. You grow, you prosper. And when you are prosperous enough that you can give back, do not give to me. I will not be here. I will be in the hearts of each of you. So share that prosperity among each other. Give gifts of prosperity to your friends, your family, your neighbors and your strangers. Give gifts on this day of Avos!"
— Sainter

They insisted on paying him back somehow, and he agreed on one condition. All the repayment he needed was two tankards of beer.   He drank beer with them, feasting with them for the entire night. Yet records say it felt like it was a week of partying, of merry celebration and of snow. Then, he disappeared into the night. Some say he left on a carriage pulled by six camels, while others say he merely flew away on his own. Avos was celebrated ever since.

Avos nowadays is a gift-giving holiday where Gnomes listen to Sainter's advice, giving presents to all of their loved ones. They gather together with their own Apple Cacti and give each other presents to celebrate prosperity on the twenty-fifth day of the fifth month of the year, the Month of Gifts.   This is also a practice that has spread, thanks to the seventh Dragonborn Grand Wizard, Perzita Theldrar. Perzita found it when she was travelling, loved it, and brought it home. As she travelled further, she brought it to various other cultures as well.

Symbols of the Holiday

There are all sorts of symbols of Avos. They are as follows: 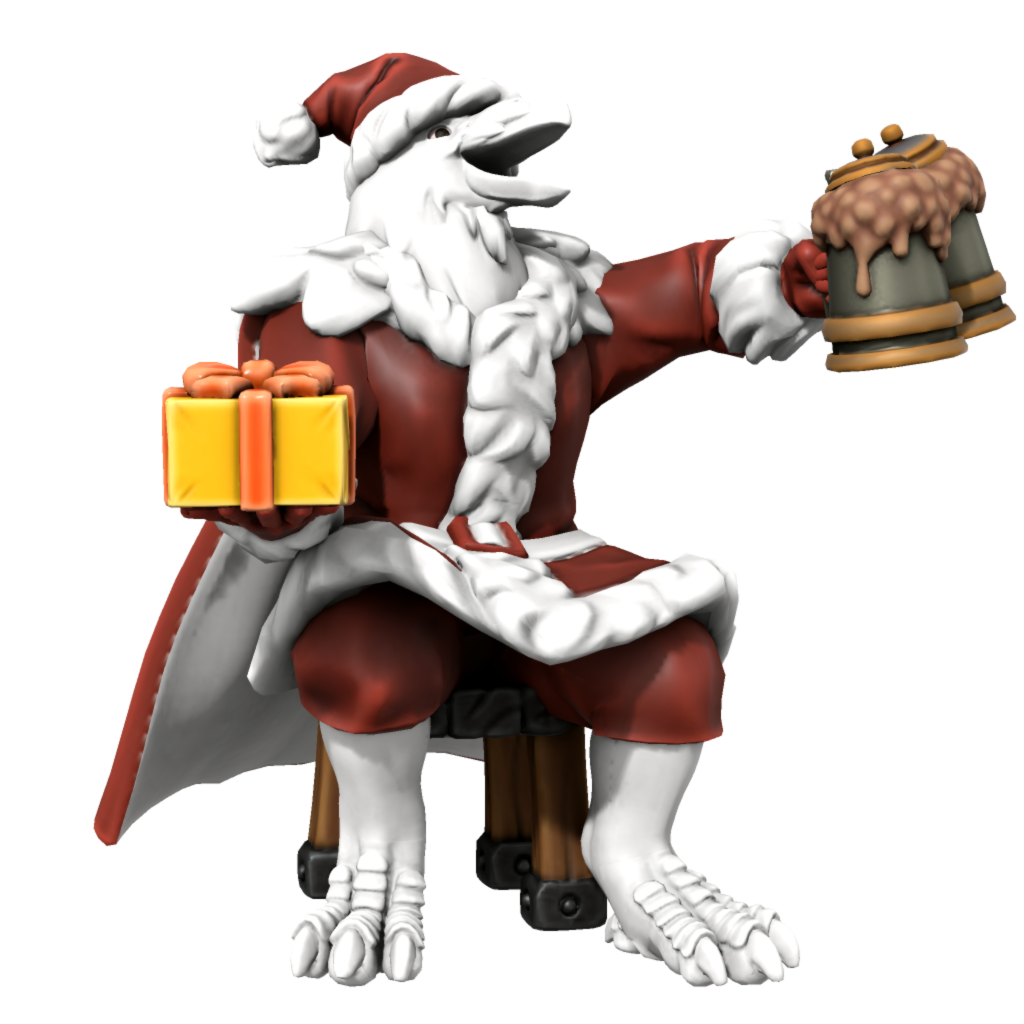 The symbol of the holiday, Sainter, actually was a real historical figure. A Kenku who went around the world giving gifts.   Sainter's first claim to fame is the Kenku holiday of Thanksgiving. It is said when Sainter was around, the Kenku were not prospering. They were at war with the Orcs and many Kenku were dying. So with his ability, Let it Snow, Sainter froze the Orcish army in place to allow for a day of rest. A day where all could sit around together and be thankful they were alive.   Eventually this grew to be more about being thankful for anything, but it didn't matter to Sainter. He wanted to spread this cheer to the whole world. Many of the civilizations he went to were not fans of him, but the Gnomes were.   His name was adapted in the Gnomish Saunta, which was read by the Dragonborn Grand Wizard who discovered Avos as Santa. From there, the symbol has been oft called Santa rather than his traditional name of Sainter.

There are some famous songs sung every year at Avos. Here is the first verse through to the corus of the most famous carol, Dair Me. Dair is the Gnomish word for Merry, giving it a few meanings. It has the common meaning of daring someone to do something, the translated meaning of marry me, and the true meaning of celebrating the holiday with someone and making them merry. Here is the chorus:

You're my prosperity
Your smile lights up the Cacti
Your kindness makes the Onions cry
So don't mind to Dair Me.
I wouldn't change us,
No, not for a thing.
I'll get so much this Avos
But all I want's your ring, Oh!   Don't you cry
No don't you dare fret
This Avos has barely
Begun just yet.
So come here my darling,
By our apple cacti
I want to be with you so
Please dear just Dair Me!
For Avos time is here!
There is another one that is just as well known but perhaps more sung because of its more simple melody. It was written by Humans who celebrated Avos in a village nearby the desert called Aurilet.

Avos Season (It's Not Avos Without You)

Onions in the air
Baby sandworms hung with care
The watermelons came in nicely
And the temperature is icy   Avos is almost here   You and I could go
To watch the Gnomes
Making snow   Take a ride with me
On a camel drawn
Desert Sleigh   Baby it's true
It's not Avos
Without you   I swear it's true
It just ain't Avos
Without you.
Sports and Activities

So much good work here! I love the sidebar about Sainter, and the little bit of history about gnomes and dwarves living together in ancient times. And the song lyrics!

Thank you! I had a ton of fun making sort of mock-christmas carols for this, so I am glad they came out enjoyable.