The marvelous minds of Veshiri find their pinnacle in her engineers, often held to be the greatest in all the myriad worlds. Engineering began to be seen as the profession of tomorrow shortly after the self-taught engineer Delehi's steam engine began to revolutionize the world.

Most employers expect certification from one of Veshiri's august - and exclusive - universities.   However, the great cities of Veshiri, Lidaidi especially, are bursting at the seams with self-educated engineers who, like the most famous of Veshiri's engineers Delehi, crowd the plentiful shelves of the Grand Library and other halls. There is no education requirement to submit a patent, after all, and a few enterprising start-ups are willing to take on anyone with a spark of an idea, no matter the papers they hold.

Most start out as students, from first-years in the majestic halls of the ancient University of Nustei to the bustling chaos of the recently-established Lidaidi Normal and Industrial School, to, for many, the cramped shelves of the The Grand Library of Lidaidi.   After an engineer has either received a certification or learned enough to imagine workable prototypes, they step out into the wide and demanding world. Engineers from top universities are often able to find employment fairly quickly, the reputation of the name on their certificate carrying them at least that far, while those who learned the old-fashioned way or from the newer industrial schools must often first prove themselves.

Payment varies widely. Many would-be inventors wind up in desperate poverty, their greatest ideas floundering or, worse, stolen by predatory companies searching desperately for the next great innovation.   For those who have actually found employment, average pay is good, at roughly 2,000 Veshiri crowns per year. The highest paid engineers, excluding those who have gone into business for themselves, are airship engineers.   Top engineers are paid incredibly handsomely, however, with the Royal Engineer one of the most well-compensated positions on the planet. The best paid engineers are those like twins Chiyi and Lashoe Stenari of the Stenari Motor Carriage Company, who strike out on their own to form companies selling their inventions. The start-up cost is high, though, in capital and employees, and few make it big.

Well-heeled engineers can find themselves climbing rapidly up Veshiri's social ladder. Once the poor daughter of a mine-worker, Delehi now serves as the Royal Engineer. Once the children of a woodworker, Chiyi and Lashoe Stenari now rub shoulders with society's wealthiest. However, the newly rich are looked down upon by Veshiri's ancient noble families, who view their new peers as crass and gaudy.

Roughly 2% of the population works in engineering or a related field.   Engineers come from all walks of life and all backgrounds, from the poorest farmer to the wealthiest noble, from families that have designed and built Veshiri's infrastructure for millennia to newly arrived immigrants in search of an opportunity for more.

Engineering is an ancient profession, but it burst into the public limelight very, very recently. Two hundred and eight years ago, the inventor Delehi patented a steam-powered mine pump, creating the first commercially viable steam engine. A wealth of scientists and inventors have since entered the scene, designing a tremendous variety of engines, and new things for those engines to run - trains and automobiles and soaring airships chief among them. 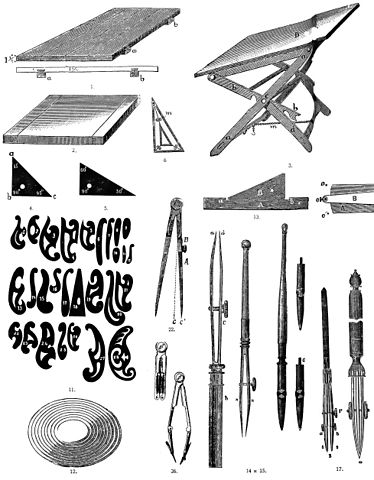 Drafting paper, pencils, drafting compasses, t-squares, protractors, drawing boards, sets of wooden curves, and a variety of other technical drawing tools all form an essential part of the engineer's repertoire. Many self-taught students start out with little more than pencil and paper, freehand sketching their designs.

In order to develop a prototype - or even a full machine - most engineers need a variety of different tools. Band and table saws, sanders, soldering tools, metal files, vices, wire cutters, pliers, screwdrivers and screws, hammers and nails, rivet guns, and a tremendous number of others are often necessary for bringing designs to life.

Most engineers rarely need more than a steady supply of paper and graphite, since very few build their own machines. Those more ambitious engineers need a tremendous variety of materials, most expensively metal.

Most workshops are cramped, with shelves full of reference manuals, desks piled high with sketches, and machines for the development of prototypes - though some engineers prefer to keep their machines well away from their drawing board.

Researching and drawing blueprints is rarely dangerous, unless you count papercuts, but the actual crafting of prototypes and then full machines can be incredibly hazardous, as improperly vented steam engines have been known to explode. The fumes from the fuel - most commonly coal, kerosene, or gasoline - can also be dangerous to breathe in.
-   Cover and inline images from the public domain   Cover image source is The Science of Railways by Marshall Monroe Kirkman
Type
Engineering
Demand
Engineers are in incredibly high demand, with businesses both old and new hungry for more workers. The traditional universities have failed to certify enough engineers to sate the world's appetite, creating openings for the self-taught.
Famous in the Field
Related Locations

A Meeting of Minds

While there are very, very few magic-users native to Veshiri, a growing contingent has been trialing the combination of magic and science. These modern polymaths are primarily composed of immigrants from higher-magic worlds, as Veshiri's priestly class often scorn the worldly affairs that so fascinate the scientist. There are a few, however, who view their study of the natural world as a study of the divine, and their creation of new technologies as an expression of their faith.   A promising recent innovation is the modification of traditional Alean heating-crystals to power a boiler, a cleaner alternative to gasoline or coal, although there are still problems, as crystals are harder to douse than flames if something goes wrong. As it often does, when new technologies are being tested. Exotic materials, including metals, glasses, and crystals, are also in increasing use in higher-end prototypes, though the high import costs limit this experimentation to only the wealthiest of companies.

Very cool, how does magic tie into this? Or is engineering and magic kept separate?

I'm still kind of poking at that - Veshiri as a whole has very few magic-users, so there's a lot less cross-training than there'd be elsewhere - and magic and engineering often take different skills/mindsets. But there's likely some people, especially immigrants from higher-magic worlds, combining the two - advanced magical materials are in decent use, and I have a vague idea of someone trying to introduce heating-crystals as a fuel source

I absolutely adore the wording you've used throughout this article, and the image of drafting tools definitely adds a significant visual component to the article. You mention a steam engine - what other awesome inventions have the engineers of Veshiri created:?

Thanks! Veshiri's engineers have designed a lot - trains, automobiles, airships, and home appliances like the icebox and the phonograph, plus the start of centralized heating and cooling systems in a few trial buildings.

Excellent article. I thoroughly enjoyed reading about it, and from a DM's perspective, there are several story or plot spin-offs one could create from this. Excellent use of imagery, well done!

Thanks! That's very good to hear