In the Salt Plains, you break towers. In the Range, tower breaks you.


Built by Darian, broken by none, the Scarlet Pass Tower represents much for the peoples of the Salt Range. Apparently, it's in 27's jurisdiction, but since that base went silent, we've taken over the historical surveys.
— Base Commandant 28

The Scarlet Pass Fortress was built by the legendary commander Darian as one of the five Bastions. Guarding the strategically important Scarlet Pass, it stood by the barracks town of Tremont, defending the capital of Linsent. While much of the citadel was destroyed after Nora Pestrib conquered the Salt Range, the tower remained standing, a symbol of defiance and mountain might.

Our oath... is protection. We protect our people. In these times of war, the natural order is reversed. Those who seek life will die, while those willing to give life to protect others will live.
— Swarm Leader Schwarz

The Scarlet Pass Fortress, as with many other fortresses, was located at the highest possible vantage point over the city of Tremont. Tremont, unlike other cities in the Salt Range, had a heavily military focus. Due to agricultural innovations due to advanced irrigation, a full five percent of the population could be devoted to defense: unimaginable at the time.   The Fortress, with a high supply of elite warriors, did not just serve Tremont, but also the larger cities around it, especially Linsent. During the whole extent of the War of the Salted Earth, Tremont warriors were noted for their valor in combat, serving with distinction at Linsent, Widwrat, Hausi, Nong, and Zent.

The stone is smooth and flat. A tall, towering building, made up of these stones, painstakingly reinforced with Kava wood, it withstood every abuse the Pestrib could throw at it.
— Swarm Leader Schwarz

The architecture is very utilitarian. A heavy stone wall blocks projectiles, with kava wood reinforcing the interior. Arrow slits were built in so that arrows and ballistae could be fired from the inside.

I have respect for those mountain men. The stone foundation reaches bedrock. The wooden frame is protected. The arrow slats are too narrow to throw firewood in. Boiling oil and water have been tried, with no effect. Their tower has withstood every method of destruction known to man.
— Elder Aquilan

Before the building was abandoned, the keep of the Scarlet Pass Tower was locked from the inside, to prevent demolition. Due to the outside hard stone stopping any burning and chipping, and the inside flammable kava wood being protected from the outside, attempts to demolish the tower were stopped after several years. 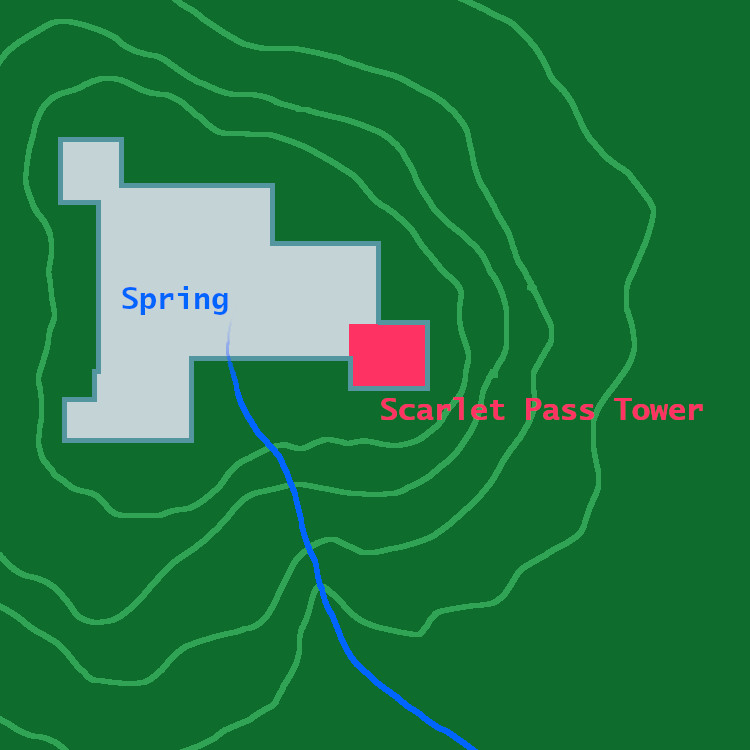 Some say we were born too late to forge civilization, and too early to conquer the world. They're wrong. I am proud to be born in a time when blood and bronze still set the course of our history!
— Darian, famous quotation

The Scarlet Pass Fortress has historically been a rallying point for the Brown Halora. During the Salt Range Tribal Union's darkest hours, Darian returned to his home village to rally the resistance.   His famous speech that day is known as the Cry of Darian. The effect was immediate: the troops dealt allied Baiqiang Union soldiers a devastating defeat, temporarily recaptured Linsent, and allowed the inhabitants of the Salt Range to flee east to the newly formed East Bay Gate Coalition.