The wood of the Kava tree is extremely sturdy. Although it burns easily, it has a tensile strength greater than steel, and a compressive strength greater than concrete. The wood proved to be a sustainable, impressive material, and was subsequently cultivated and used in place of asphalt and concrete in the building of drone centers.
— Environmental Impact Statement, Drone Headquarters

The wood of the Kava tree is a very sturdy wood, especially in comparison to its relative light weight. Harvested from the Kava tree, endemic to the Salt Plains, the wood has proved adaptable to a variety of purposes.

The Kava, while less dense than water, still has a compressive strength approximately three times that of concrete, and a tensile strength significantly greater than that of steel. However, its greatest weakness is its vulnerability to fire. As with bamboo, the kava plant is highly flammable, and its strong threads of cellulose burn like cotton. Also of industrial importance is its relatively weak resistance to acid.

The kava plant is the Swiss Army Knife of plants... utilized for any and all purposes, shaping itself into firestarter or clothing or scaffolding.
— An internal memo circulated within the Analyst Drones

The kava wood has many uses. A short list of the most common uses are below:

After the Halora achieved bronze technology, they were able to begin usage of the Kava. The plant was sustainably harvested, as in their religion it is both a symbol of strength, adaptability, and head god Kali, Bringer of Peace.   In the drone world, farming is done on a large scale to produce bamboo in industrial quantities for terraforming of the world. All drone bases are made of fireproofed bamboo, as well as roads and cities. Small plots of bamboo are also grown aesthetically.

Let the ruler control the price of the grain, so that when grain is cheap and unvalued, she buys as much as the government can hold. Then, when the grain is in shortage and wanted, she may distribute grain at her price. This method, if executed correctly, can apply to any commodity, and can ensure that the city is never in shortage of anything.
— Classic of Law

As dictated in the Classic of Law, and implemented across the Salt Plains, a government company of kava wood is established. When the wood is pouring in at a surplus, and the price of wood drops below a certain benchmark, the company buys. When wood is needed, and the price rises above a certain benchmark, the company sells at an affordable price, both filling the coffers of the government and guaranteeing that the price remains stable. The wood is semi-common, and is often used to make "higher-class" buildings, as a symbol of status.   This does not mean that corporate logging is banned: no, indeed, several companies exist to log wood, and earn healthy profits. However, some chafe at this idea of regulated logging. A minority of loggers illegally cut down the highly-valued wood, running the risk of meeting a patrol of guardsmen and being heavily punished for the crime. Black markets for this sacred wood are few: many refuse to buy from such a source, preferring the legal government.

The Salt Plains gates make sure to implement strict limits on kava logging. A limited license is established every year, which endows the licensee to a certain amount of kava logged from the forest. Only one hundred thousand licenses are given out every year, and this guarantees that the half-billion trees of kava in the swamp may be kept healthy. 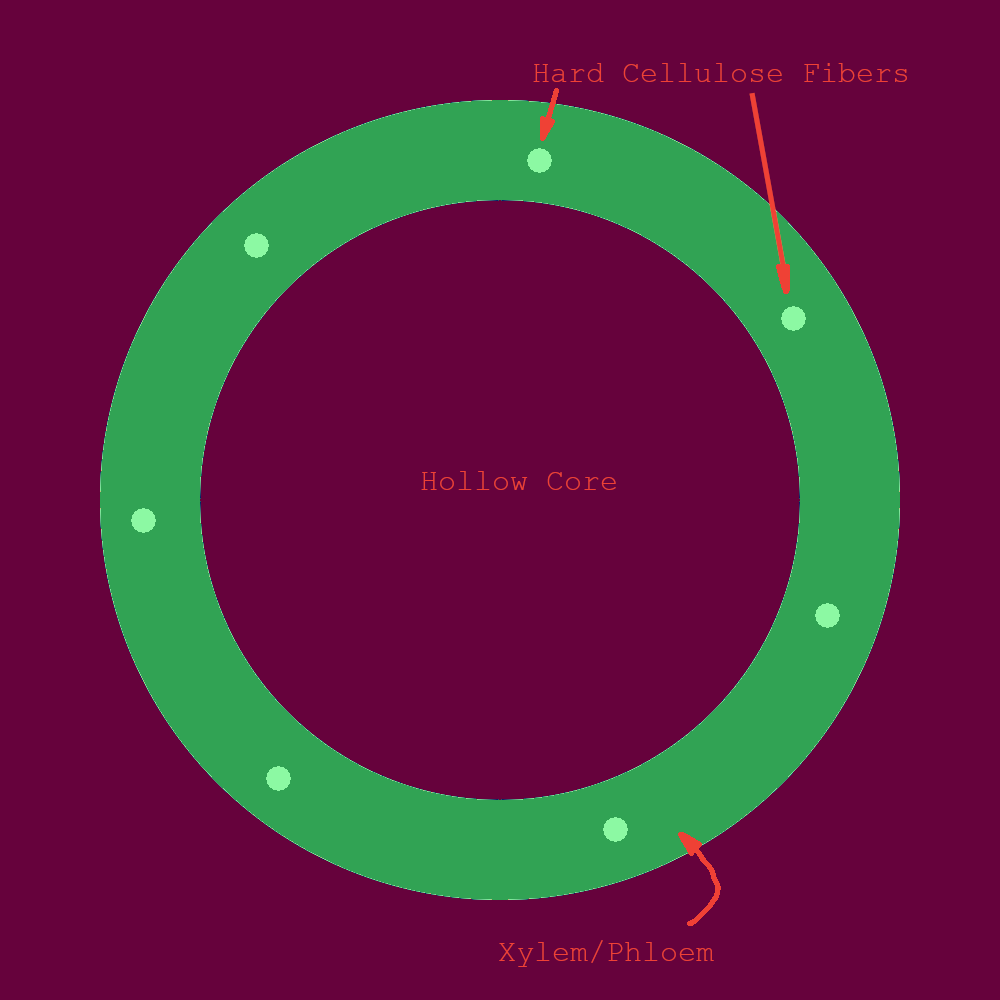 Cross-Section of Plant by ElementalShrike
The strong cellulose rods are what gives the plant its strength. Have you ever tried tearing a grocery bag? You can tear it easily if you rip it properly, but if the plastic gets in a single rope, it gets near impossible to break. That's why the rods make the plant so strong (besides its naturally hard wood)

Notice that the stiffest tree is most easily cracked, while the bamboo or willow survives by bending with the wind.
— Bruce Lee

The kava plant is very much revered by the Brown Halora, so much that it is an example used to teach young halorin how to behave. It may not be the strongest of plants, indeed being a grass, but it still stands head and shoulders above any tree.   Integrity, tenacity, and elegance are all shown in the bamboo, according to halorin philosophers. Bamboo does not attempt to stand straight, to pretend to be a tree (integrity). It sways in the wind, but the wind cannot break it (tenacity). It is made up of tiny, simple, segments, and yet it towers hundreds of meters above (elegance).

I like how you can convey all the information about this in a concise manner that doesn't sacrifice anything crucial. I normally don't like it when people make things too scientifically impersonal, but in the case of materials and items, I think it works. Great job!

Do you have any... tips on how to make this article better?

Great article! I love the cross-section of the plant to show how the rods work. It's a bit overly nerdy for me personally, but I think it nails what a material template should be like.   Are these measurements/weights actually accurate to your world?   I was slightly lost on the drone world part. What does that entail? Also, the last part with the Tarde & Market part just sounds like its dying to have an uprising. I imagine that having The Salt Plains have limits like that must make someone rich and someone else very sad.   Is there an illegal Kava Wood market?

The measurements and weights are accurate to my world. The drone world thing is because Earth sent terraforming drones to this world to attempt to terraform this planet, and they are busy doing so. The Salt Plains has had one very heated debate on government policy, with the legalists winning and establishing these government companies. Since then, there's been a major uprising every now and then, with people sometimes toppling the government. However, it is true that much of the money made from selling the kava for the government has gone to maintaining quite a fine standing army. There is an illegal Kava wood market, but none of these markets exist in large scale, mainly because the government is a very good police state, and also because the kava wood is holy to many halorin, who therefore log it less extensively than other woods.

Ok so i didn't notice any grammar things! That is good. So content wise. I like the cross section and graph you use. It adds a layer of depth that outs the tree into perspective as it gives a clear contrast to what we as readers already know. Something i noticed while reading is that it is quite dry. Worldbuilding jn general can be quite dry and your quotes do combat this but their is very little story here. Now there doesn't HAVE to be any at all but if your looking for a recommendation perhaps exploring the connection between the halora and the plant. You said it has religious elements. Why? Why is it so cruicial, it represents strength yes but who determined this. Is there a myth. A pomegranate for example represents passion and also sin as many origin stories see it as a fruit that corrupts even to the point of Adam and Eve eating it. The Greeks saw it as the fruit of the under world. If I'm not wrong it's due to the fact that they thought eating it could kill you...cant remember. None of this is required. Your article is great and comolete but if still like to know. Are there any myths surrounding it?

Soon to come! (Oh and by the way its just that you can't eat it... just like you can't eat a metal bar, you can't eat this wood, it's that hard, your teeth would crack before the wood breaks)

That's intense lol. But the tea is goid apparently xD

Hey I've kinda done a myth, right now it's in development but I put it into the sidebar of one of my articles. Would appreciate a readover and review <3