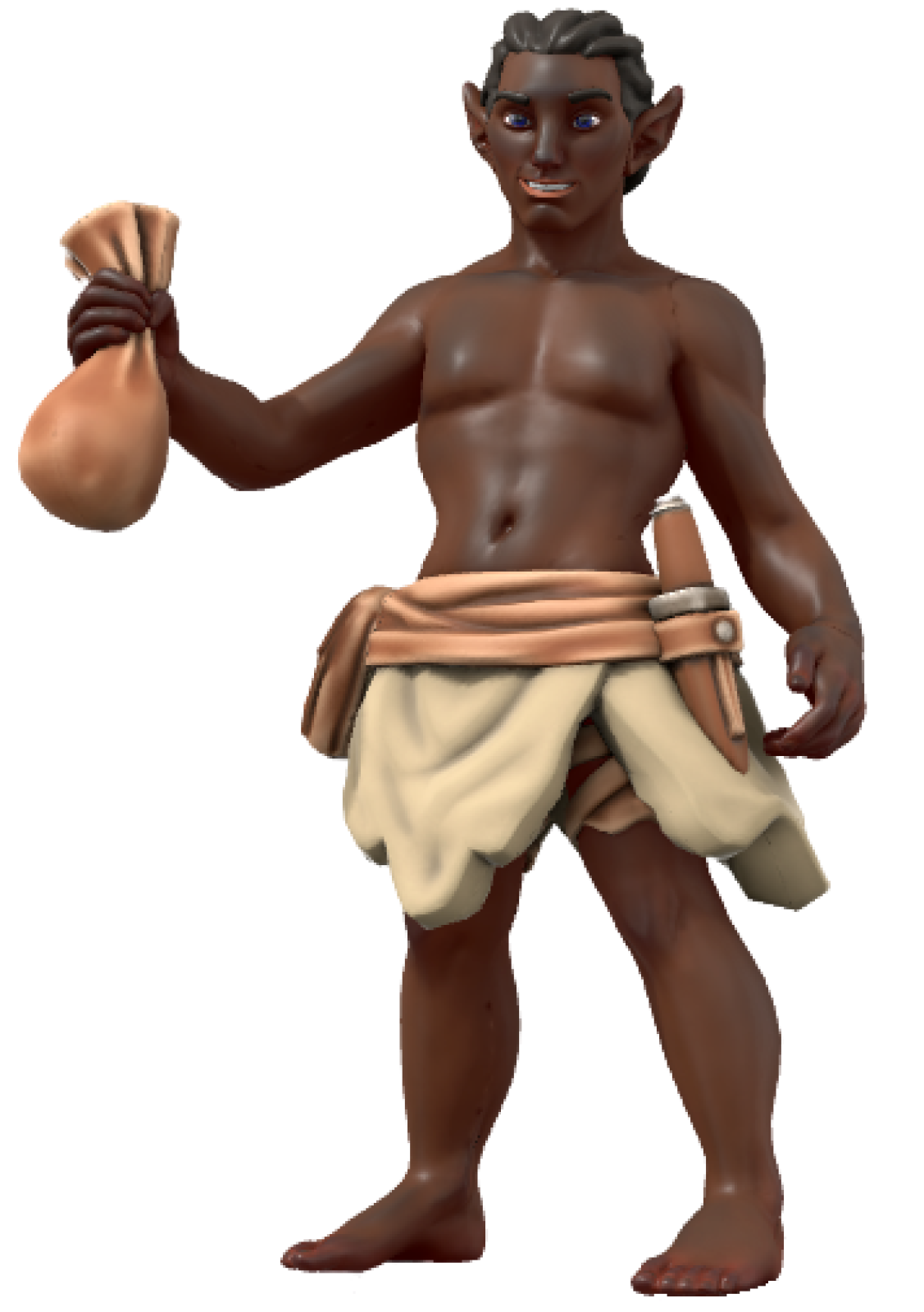 The Kohtilan people work the lands of southernmost islands of Ostari. They are taught to respect both the land and each other. Kohtilans place a strong emphasis on community and the importance of community in times of struggles. A Kohtilan is expected to help everyone that they can, and in return others will do the same for them when they need help. This mindset is often applied to those outside the community, unless the outsider is particularly untrustworthy or needs particularly dangerous help. The Kohtilans have a high regard for nature and revere nature more than most people of sovereignties. In return for the raw materials that the land provides, the Kohtilans keep the land as pure as possible and perform special rites to appease any elementals that might be angered.

Kohtilans are expected to show proper respect for the land by preforming special rituals before they start work and before major events like sowing seeds, extracting ore, or killing an animal. Even if a person is only passing by it's considered polite to greet them. If they aren't passing by this greeting is expected to come with a hug or other physical act of affection depending on the people's relationship to each other and whether or not both are members of the community. Regardless, Kohtilans tend to stand close to those that they're talking to and show physical affection often. Please and thank you are seen as redundant words at best by many Kohtilans and can be taken as insults as they show a person's lack of belief that a Kohtilan would do something.

Most Kohtilans wear their hair long as long hair is seen as natural and Kohtilan culture emphasizes changing nature as little as possible as a sign of respect. The use of makeup is frowned apon for the same reason. Since many Kohtilans also do hard labor, they tend to tie their hair up. Most people wear simple tunics that are tied with a belt and typically end at the knees or around the ankles. Patterns around the cuffs and on the belt are common on fancier tunics. Light clocks are often worn to protect against the weather or as decorative garments for special occasions. Earrings used to be very common but after the fall of the Aghu sovereignty they are much rarer. Necklaces and bracelets usually made out of scavenged materials are popular.

Tropical birds, once the symbol of the Aghu Sovereignty have now fallen out of favor and have become symbols of extravagance. Plants are symbols of wealth and prosperity. Spirals are seen as symbols of rebirth and change. Kohtilans make a variety of crafts including pottery, tiles, baskets, and cloth. Bright colours coming from vegetable and flower dyes are popular. Objects are usually decorated with patterns of flowers, leaves, and other plants all intertwined with each other. Kohtilan buildings are made out of mud or wood and have peaked roofs. They tend to have small slits towards the tops of buildings to let cooling air in. Courtyards are another common method to help keep buildings cool. In forested areas some houses are built in trees Along the coastlines, many houses are built on stilts. Kohtilan buildings are decorated with decorative tiles, paintings, wood carvings, and plants. Like various art objects, home decorations tend to have patterns of intertwining plants.

Throughout the year Kohtilans observe various holidays connected to the growing season including when seeds are sown and when plants are ready to be harvested. These holidays thank and honor the land for its gifts through chanting, verbal praise, offerings, and dancing. A similar, albeit smaller, occasion happens whenever resources are harvested like the picking of wild flowers to make dyes, the cutting down of a tree for wood, or after fishers have made an especially valuable catch. Small daily rituals to thank the land before beginning work are seen as necessary. These rituals are less elaborate than those mentioned before and usually consist of verbal thanks and a small offering.

Births are public affairs with most if not all of the community being present helping the pregnant person through moral support, physical comfort, assisting with delivery, their presence, or simply praying. Births typically occur outside as being close to nature is considered important for such a natural function. This area usually has lots of plants in it as they are also considered advantageous. Often the pregnant person will wear several garlands and other jewelry like adornments of plants. If the baby or babies and the birther survive birth a short celebration is held and the deities and quasi-deities are thanked for the successful birth.

When a Kohtilan dies the entire community is present at their funeral. Every person is given time to pay their respects either verbally or in the privacy of their own mind. The deceased is naked with their body painted with red paint. Like when an animal is killed, the person is verbally thanked for their contributions by both the entire community and a special person who was selected for this duty since they were especially close to the deceased. Prayers are made to Kerali for the person to be granted a pleasent and fulfilling afterlife despite whatever faults they may have had in life. Offerings are placed on the deceased's body and the deceased is either buried in the ground or placed in the sea depending on where they lived and worked. Crying is seen as natural and it's expected that quite a few people will cry during the funeral. Once the body is disposed of, the deceased is no longer considered to be part of the community, instead their spirit is said to go onto the afterlife and their body is considered part of nature. Therefore after a funeral, the person lives on in the community's heart and sometimes stories. No further visits are made to the gravesite for that person. People will walk through the gravesite and look at the beautiful plants that have sprung up there, nourished by the deceased's bodies.

Not doing the tasks expected of you, even those that are not explicitly stated is a major taboo among the Kohtilans. If a person routinely doesn't fulfill their duty of helping others in the community, they will be cast out of the community and never allowed to return. A person who doesn't perform the customary rituals is considered to be inviting destruction. Therefore the one who does this will start to be avoided by their fellow Kohtilans and if the situation becomes serious enough they may be exiled to protect the community from the wrath of nature.

Despite the fact that few people have it, a plump, less muscular body type is considered most beautiful by the Kohtilans as it is a sign that a person doesn't have to do a lot of hard labor. Similarly, hair styled in more complex styles or loose is considered beautiful. Brightly coloured clothing is expensive and therefore attractive, and green clothing is considered particularly attractive because of its symbolic nature. Wearing brightly coloured A person's mind is an important aspect of beauty to the Kohtilans. A person that thinks creatively and is innovative is seen as more beautiful than one who does not.

The ideal relationship is one that models the ideal community with only a few people. In an ideal relationship all individuals would help each other whenever the other(s) needed help and would work on tasks as a group unless they had a good reason not to.

The government of Kohri and the Seekers of Knowledge both have many Kohtilans among their ranks.
Related Items
Significant presence in

Remove these ads. Join the Worldbuilders Guild
Ethnicities
In response to the prompt Describe the common symbols and color associations with a culture in your world.

I love all the details in this article - I think my favourite bit is about how 'please' and 'thank you' are considered rude. I assume that they don't have those words in their language.   I like that kids aren't considered part of the community until they're four. :)

It was really fun to write and think about all the small details. Actually they do have the word 'thank you' since while members of the community are expected to do it, the land and the deities most certainly aren't. They might also have 'please' for the same reason but they seem to be more inclined to be grateful for what they had instead of asking for more. High infant mortality rates will make their mark, especially considering how important being part of the community is.

Creator of the the Disputed Lands, a bronze age world of politics and clockwork magic.
Check out my shipwright challange article: Little Victory