Creni. A nation of magitechnology and wonders of magic used the world over. But these marvels weren't the only thing to come from the country. Creni's history also bears the most notorious killer known throughout Tarin.   The Heretic.   Hundreds of years after the formation of the cult known as the Children of the Blinded Sun following the actions of Ilai Scordato, Creni had its own taste of the horrors wrought by the Dark God. It was high Summer when it happened. The Vessel of Truth had made a pilgrimage from her Shining Temple in the heart of Shikahn to visit the Vessel of Order in Malin City. It was to be a short and peaceful visit, and as such she traveled with only a single Knight Attendant. She retired for the night, deep within the Grand Temple of Order, and dismissed her Attendant.   In the morning, her Attendant found the window had been crudely forced open, and found his charge dead on the floor, a dagger still in her chest. On the wall, the symbol of the Dark God had been drawn in her blood.   Hunters and Knights alike were immediately dispatched to attempt to find the man or woman responsible. News of the death of a Vessel spread quickly and before long a haze of panic settled over the city and its inhabitants. To kill a Vessel, the very voice of the Gods was the ultimate act of heresy.   But it was as if the assailant had vanished into thin air. It was clear they had fled through a side door from the Vessel's room from bloody hand prints, too degraded to give any solid evidence. And then all at once all signs of their retreat stopped.   Of course, this was only the start of the Heretic's killing spree.   For ten years, Hunters grew more and more frustrated. Bodies with the Dark Gods symbol cut into their flesh were found, His symbol nearby in the victim's blood. But no evidence of the Heretic themselves. Some came forward, claiming to have seen a man in jet black armor, eyes glowing red and yellow to match the Dark God fleeing the scenes. But none could give descriptions that led them any closer to his capture.   Then, all at once, the killing stopped. The Heretic disappeared just as quickly as he had come from the shadows. Some say the Dark God made a deal with him. Some say he was captured and executed by Hunters in secret. Some say he died. To this day, no one knows the truth of the Heretic Killings.

The Heretic Killings were a highly publicized event within the country of Creni, and beyond. The killings were brutal and efficient, leaving no shred of physical or magical evidence behind to trace the crime back to the source. Citizens grew frightened to leave their homes after dark, curfews were instilled, Hunter patrols were increased. Nothing seemed to stop the killings until the Heretic vanished.   Interestingly, with exception to the Vessel of Truth, all victims of the Heretic had some level of criminal activity in their past. Those who had committed more heinous crimes were dealt a more brutal death. This of course did not impact the search for the killer; regardless of intent, the killings needed to be stopped.

Tales of the Heretic spread across Tarin. The murders are praised by members of the Children of the Blinded Sun, and decried by virtually everyone else.

Some claim that the Heretic was a misunderstood vigilante, acting as an agent of Order, trying to stop other criminals from causing chaos. These individuals claim that the symbol of the Dark God was meant to claim the victim was an agent of Chaos, rather than acting as a signature of his handiwork.   A more common variation claims that the Heretic wasn't a person at all. This version of the tale claims that the reason the Heretic was never caught wasn't due to a deal with a God, or his death, but rather due to what he was; the spirit of Ilai Scordato, returned to continue his work as an agent of Chaos. This would explain the lack of evidence, the claims of seeing a man with the eyes of the Dark God at the scenes of the crime. This is one of the more widely accepted theories among those outside of official Hunter work. 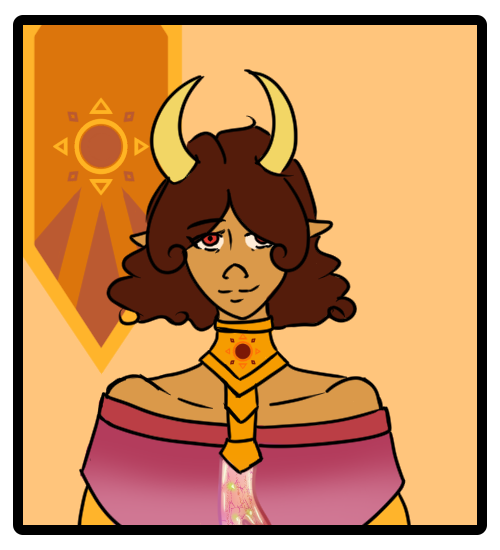 by CrimzN
The Heretic's First Victim 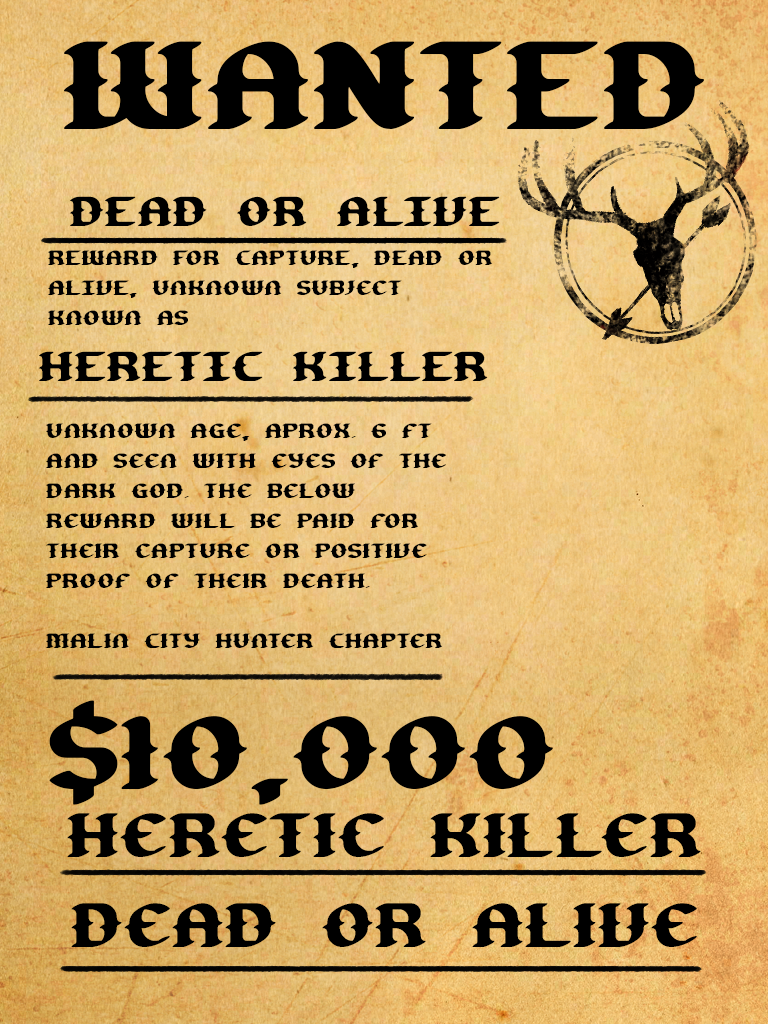 I really like the addition of the variations of the story! It just shows how much a story can change between retellings and down the line. Very nicely done!