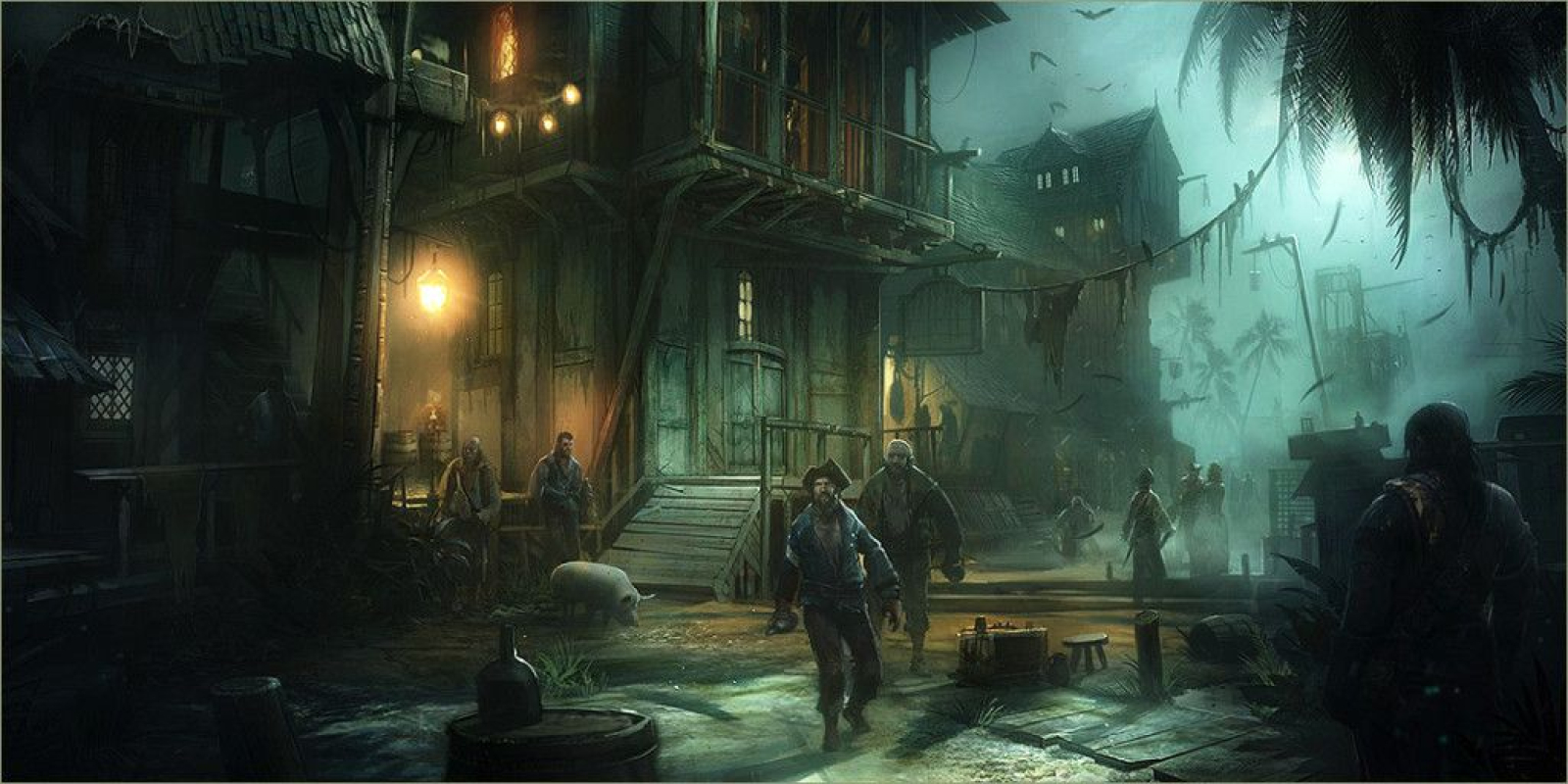 What's your pleasure?
— Commonly heard in the dark corners of Far Harbor


Far Harbor is a place full of untold history. While there is no shortage of scholars to record the deeds of places like Ghal Pelor , Melanthris , and Frial few bother to do so here. It's not a place that gives rise to sages of its own nor is it one that historians aspire to visit. Far Harbor's story is told by weathered graffiti and tattered pennants flying ragged in the ocean breeze.

The people that choose to make this city their home are wanders, criminals, fortune-seekers, and lost souls. Together they've managed to form a fragile ecosystem that thrives of chaos and a promise of freedom from all forms of scrutiny. Such a fragile ecosystem would have failed long ago if not for the success so many have found here though. Gold, treasure, opportunity, and ancient secrets are plentiful on the streets of Far Harbor and her surrounding territories. Ambitious adventurers with the requisite skill to survive the countless dangers that lurk here can do very well for themselves. That said, unmarked graves and shipwrecks dot the islands and serve as a constant reminder that the unprepared are not welcome here.

The earliest known record of a settlement in the Tairuk Island Chain can be found in Balmoran records dating back four and a half centuries ago. They spoke of little more than a shanty town seemingly built from the wreckage of marooned ship. The explorers made brief contact and found that the small group of humans living there were happy enough to be left alone and in no need of rescue. When the Balmoran cartographers returned to the region only a few short years later they noted the community had vanished and their simple settlement was gone.

The next mention doesn't come until roughly a hundred and twenty years later when Melanthrin bounty hunters tracked their mark across the open waters and to the Tairuk Islands where they discovered a completely functional settlement complete with a working port and rooftop farms. The elven bounty hunters attempted to contact the local authorities here to inform them of their business but found the little in the way of central leadership. Instead, it seemed to be a place dominated by gangs, pirates, mercenaries, cabals of magicians and similar such oddities. They were unable to locate their target but they did become the first people to actually enter into the record the name Far Harbor.

Once word of their efforts spread back to the mainland Far Harbor became a destination for shadowy elements and those on the run. Trade ships going back and forth between the gnomish kingdom of Carda, Melanthris, and the small coastal communities along the western edge of Tairos soon began making regular trips to this new city. Their arrival helped unearth some of the unknown history of the region though all of it comes from dubious sources. They learned that Far Harbor seems to have been born out of a mutual need among the pirates in the region to trade with each other and restock their consumables. Many of them maintained small farms, smitheries, and such to manage that restocking without having to return to the mainland. A general truce among these nefarious parties existed out of necessity rather than any altruistic ideal. Returning to the mainland was was a dangerous prospect for many of these criminals and the idea of losing their black market to internal conflict quickly became a taboo thought and led to a simple set of rules they all observed.


The Coming of the Fae and the Queen's War

The arrival of the Fae in Tairos was met by most with open arms. They offered much in the way of fresh goods, culture, magic, and of course... Manacite. However; Far Harbor didn't share that sentiment. The citizens here were made of Tairos' most paranoid and opportunistic souls who were well aware of how long cons worked. While they appreciated the value Fae magic offered they also saw the way it was dangled and doled out. They watched how fae wormed their way into society and cozied up to those in power. It was the same thing many of their own had done back on the mainland. They knew to be suspicious and how to make fae visitors disappear quickly and without too many questions asked. The most subtle among them would try to sink visiting fae ships or use magic to direct storms into doing the dirty work for them. And while few fae ever managed to set foot in Far Harbor and survive a great deal of their manacite did. Pirates would make sure to seize every bit of stone from the fae before disposing of them.

As the Fae's time on Tairos stretched on the inevitability of war appeared on the horizon. Far Harbor's citizens never chose sides or joined the The Grand Concordance's efforts nor did anyone approach them to do so. To the pirates it mattered little who won. The manacite they'd reaped from the fae became more and more valuable as natural magic bleed from the Leylines. They had no love nor loyalty for any of the great kingdoms either. Refugees in the west sought any safety they could find and for a few that meant Far Harbor. These sad souls were largely pitied by the citizens of the island city and many actually went to lengths to take them in and give them work. While certainly generous by the standards of Far Harbor many of the refugees found themselves adopting a life of piracy, crime, and danger. The ranks of many crime lords swelled during the closing years of the Queen's War.

Today, Far Harbor is a more dangerous place than it has ever been in the past. The city has grown into a sprawling menagerie of ramshackle buildings, ship-clogged docks, and cruel figures looking to exploit new arrivals in any way they can. However; the fragile alliance that holds this all together is showing signs of fracture thanks to a new threat that has recently made landfall. The Black Thorn Society

The Black Thorns are looking to expand their influence all across Tairos and have had eyes on Far Harbor for decades now but their organized and strict operation as always been anathema to independence cherished by so many here. In recent years the push to create a foothold on the island has increased. Agents of the Society are everywhere and they are paying generously to bring locals on to their payroll or to eliminate key opposition. Many speculate the ultimate goal is to take over all of Far Harbor and create a secure base of operations for themselves.

The Black Thorn are not alone in their desire for control of the Island Chain though. The Tengu are arriving in ever greater number as they look for a new home. They've grown tired of their dependency on the Ghal Ankharans and seek a place that can truly be theirs. Far Harbor offers seclusion as well as access into the criminal underworld of Tairos both of which they deeply desire. Here, far from the prying eyes of the rest of Tairos they can further their arcane experiments and spread their shadowy influence.

Is these internal struggles were not enough Far Harbor is also firmly in the sights of the primitive tribes on Big Ruk. While fractious and simple on their own their are those among their kind that seek to unite the tribes and push the scum of Far Harbor into the waters. They look at the city and her people as an inviting rot that beckons to the Totem Spirits of Corruption.

Mixed and extremely diverse. No race is outlawed here.

There is no organized government here. However, the people of Far Harbor recognize that a might-makes-right attitude will quickly lead to the city descending into chaos. The largest organizations and most powerful individuals gather on a regular basis to discuss matters of trade, business, and bitter issues between each other. It's during these gatherings that most disputes are resolved "peacefully". That generally can be one of several different things: a duel between the aggrieved parties, an amicable resolution, or the others forcing a solution upon the others must abide by (under extreme duress is needed).

There are no formal defenses here though many of the ships that come and go are armed. Almost all the citizens of Far Harbor know their way around a fight as well

It is known for it's black markets and free trade of all kind. It is also one of the few places in Tairos that Manacite can be found for sale with regularity (though still at extreme price)

The docks in Far Harbor are perhaps their most valuable asset. There are dozens of docks each ranging in size and specialty. The many different owners have intense rivalries and often look for ways to put each other out of business. Yet, dock work is a vital trade here and new docks pop up as frequently as they close.

Far Harbor has access to all manner of fish and ambergris from the surrounding waters.

The largest factions in Far Harbor are the Tengu and the Black Thorn Society though even by their numbers combined both are an extreme minority of the population.

A wealthy or adventurous few do visit Far Harbor for leisure and sight seeing. They are generally here to explore Big Ruk or to enjoy the pleasures of Far Harbor free from the laws and morals of their home land.